Poetry is a powerful early literacy tool. It fosters children’s social and emotional development and can help children talk about their feelings in a new way. What better way to introduce children to poetry than with poetry written for children by U.S. Poet Laureate Juan Felipe Herrera. 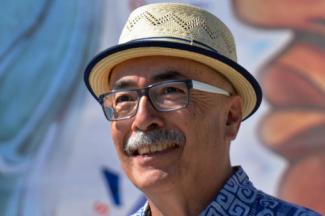 “Poetry is one of the largest, most beautiful, most intimate and most effective ways of participating in public life."
- U.S. Poet Laureate Juan Felipe Herrera

Born in California in 1948, Juan Felipe Herrera is the son of migrant workers. He came to a love of poetry via his parents’ stories and by his participation in his elementary school choir. As the first Latino to be named Poet Laureate, Herrera draws from his life and Mexican American culture, writing in both English and Spanish, sometimes in the same poem.

Calling the Doves/El canto de las palomas describes Herrera’s life traveling with his family as they moved throughout California as migrant workers. They traveled in an old army truck which his father later converted into a trailer, following the seasons: grape vines in the winter, melon, lettuce and broccoli in the spring.

Their downtime was filled with stories, singing, and poetry. The warmth and love in Herrera’s family is evident in his prose, and the illustrations by Elly Simmons are riotous, with elements of folk art.

The Upside Down Boy/El niño de cabana picks up where Calling the Doves ends.

Juanito- as Herrera is then known- is 8 years old, and his parents have decided it is time that he go to school.

But Juanito is lost in a new language, a new school, and a world far removed from the countryside his family traveled. His teacher, Mrs. Sampson, is gentle and patient, however, and helps Juanito come out of his shell.

The Upside Down Boy, in fact, is dedicated to her, for inspiring Herrera to “believe in his own voice.”