Your library card gives you free access to over two million books, ebooks, magazines, DVDs, streaming movies, music, and more. Would you surrender your right to choose any one of them?

In contrast, 71% of readers oppose efforts to remove books from their local public libraries, according to an ALA survey of 1,000 voters and 472 parents of public-school children. That poll comprised Democrats 75%, Republicans 70% and independent voters 58%. As well, a recent poll shows that 68% of Tennessee voters oppose book banning. That includes removing books from school libraries, and those strongly opposed include the majority of urban, suburban, and rural voters.

Today, for our Freedom to Read campaign, we’re calling on everyone to celebrate intellectual freedom with us, with a free, special edition “Banned Books” Nashville Public Library card. (You can also buy t-shirts and coffee mugs via our library foundation.)

The limited edition cards are available online and at our 21 locations. As always, an NPL card is free, and there’s no fee to switch out your existing card for this special design. Visit your local library location to get yours today! 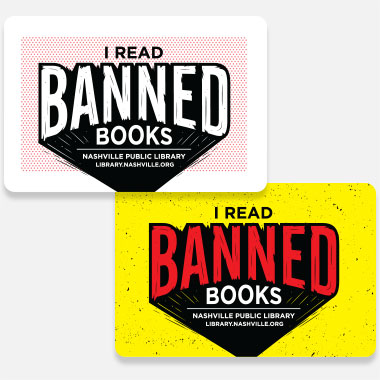 About Your Library Card

You can use your card at all 21 Nashville Public Library locations and for all online services.

Please treat your card with the same care you would a credit card. You are responsible for everything checked out on it. Contact the library immediately if your card is lost or stolen.

Library cards are free for all residents of Davidson County.

If you live outside Davidson County, you can receive a free library card to check out physical items only or you can pay a $10 yearly fee to obtain access to online resources in addition.