Marian Anderson, one of the finest singers of the 20th century, often performed in "Music City."

Her first visit was in 1931, when she had not yet burst onto the international scene.  She returned in 1932, performing at the Ryman Auditorium. 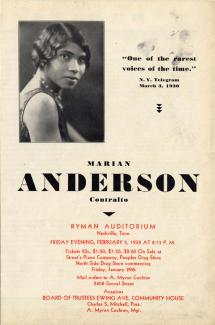 The crowd was modest, but enthusiastic. The Nashville Banner newspaper would later write of her first two performances: "she was heard by comparatively small gatherings of music lovers, [who] realized at that time that she was one of the outstanding vocalists before the public. Her fame has grown since then."

By her third visit in 1941, she was performing multiple encores to a capacity crowd. She would continue to visit the city, about every three to five years, for several decades, often performing at the Ryman.

On January 7, 1955, Anderson made her ground-breaking appearance with the New York Metropolitan Opera – the first time an African-American had performed on their stage. The very next day, the Nashville Banner announced that she would be appearing at Tennessee State A&I (now  known as TSU) on January 17. She was close friends with Mrs. W.S. Davis, wife of the university president. 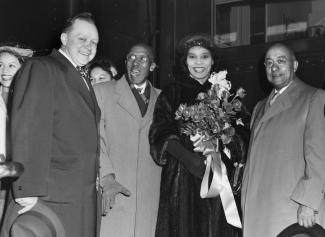 On the day of her arrival, Anderson was welcomed at Union Station by Mayor Ben West and university dignitaries, including Dr. H.W. Walker and Dr. Merl Eppse, shown above. At the intermission of her performance that evening, Mayor West made her an honorary citizen of Nashville, and gave her a key to the city.

Some years later, she received another honor. On May 7, 1979, Fisk University granted her an honorary Doctorate in Humane Letters.

Besides Anderson's frequent concert performances, there is another Nashville connection worth mentioning. One of Anderson's teachers at the Curtis Institute in Philadelphia was Madame Charles Cahier, who was born in Nashville in 1870,  under the name Sarah Jane Layton Walker. Cahier had studied personally with Gustav Mahler in Vienna, and Anderson's performances of this composer's works bore Cahier's influence.

Cahier was also instrumental in arranging for Anderson to perform before the composer Arturo Toscanini in Salzburg, Austria in 1935. Anderson was intensely nervous, and during the intermission, Cahier introduced her to the maestro. The composer gave his assessment of Anderson's talent: "'Yours is a voice such as one hears once in a hundred years.'" This pronouncement, which quickly found its way into the press, is credited with helping to launch Anderson's career and brought worldwide attention to her spectacular talent.

My Lord, what a morning; an autobiography