Lula Naff is the woman behind shifting the Ryman Auditorium from a religious venue to the entertainment destination it is today. In observances of Women’s History Month, I thought what better way to show off Nashville, the Public Library, and women than by reintroducing this famous woman that many may not know about but whose existence helped to shape one of the city’s greatest event venues. 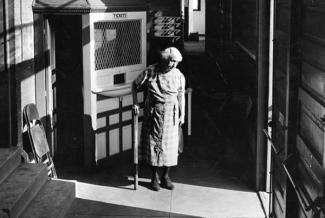 Today, the Ryman is known for musical events, the Grand Ole Opry, Country music, and excitement. But, it wouldn’t be known by these and other descriptions if it hadn’t been for Lula Naff. Her remarkable decision making and innovative ability to book diverse events have allowed the Ryman to maintain its historical run as a “must-see, must-do” for both locals and visitors to Nashville who crave a great time. Ms. Naff’s early influence of seeking various forms of entertainment for public and private viewing has become the catalyst for other venues attempting to gain larger audiences in Nashville. Though originally conceived as a building used for worship, debt and poor foot traffic forced Naff to invite wider varieites of performers to bring in more audiences and money.

Lula Naff  was born in Fall Branch, Tennessee in 1875. She later worked as a stenographer for DeLong Rice Lyceum Bureau of Johnson City. She became widowed and, in 1904, the company moved to Nashville, bringing her and her young daughter along. After the company’s closure in 1914, Naff’s part-time job of booking Ryman Auditorium’s shows became her full-time career. By 1920, she was elevated to manager of the Ryman, becoming the first woman to fully manage the venue. It was because of her innovative ideas in booking such vast events and capturing more audiences that the Ryman was able to maintain its popularity and create an image of diversity. She retired in 1955, having worked over fifty years with the Ryman, and died in 1960 at the age of 85.

During her career, Naff recruited a variety of musical performers, speakers, and actors to the Ryman, including:

Want to learn more about Lula Naff? The Special Collections department at Main library branch has an extensive collection of Lula Naff’s personal memorabilia, dating from the early 1900s to her retirement. Or check out the segment NPT did for Carousel of Time.