Music has played and continues to play a vital role in civil rights movements, uniting and inspiring activists in their pursuit of justice and freedom.

We Shall Overcome: Songs of the Southern Freedom Movement

In the 1950s and 60s, civil rights activists revived and adapted old spirituals and hymns to reflect contemporary issues of racial inequality into what we now call freedom songs.

Probably the most notable freedom song to come out of Nashville during this time is “We Shall Overcome.” It was introduced to the Highlander Folk School by the Negro Food and Tobacco Union workers who sang it on the picket line during their 1945 strike in Charleston, South Carolina, and made popular during the lunch counter sit-ins with the help of folk musician Guy Carawan.

“There were also two other things specifically about Nashville that I thought to mention as you all were talking.

One was this more public role of music in rallies and things. I mean, once Guy had met everybody from Nashville – and Highlander was about two hours away – he started coming to Nashville to visit (laughs). And once, the time – you’ve probably heard about this already – when there was – it was after the bombing of Alexander Looby’s house. There was a very large march down to the Court House and the Mayor finally came out on the steps, and Diane Nash and others really confronted him and asked him if he didn’t believe that segregation should be dismantled.

Guy was there that day and led ‘We Shall Overcome,’ and I believe it was the first time that it went out over television nationally. And so that was like a very introductory time of that song to be heard much more broadly than just locally.”

Candie met Guy at the first south-wide gathering of sit-ins at Highlighter Folk School in April of 1960. She was a white exchange student attending Fisk University and remembers singing in the jail after she was arrested for participating in the sit-ins. She says,

“And it was very – there was a great feeling of solidarity and righteousness, you know, when like 80 of us were arrested, we were all taken out in the paddy wagons. We were all kind of booked together in the jail. But then once we were booked, there was one other white woman and myself. We were peeled off into one cell by ourselves, and the African-American women were in one cell, and the African-American men, which was the largest group, was in one cell. And then there were maybe two or three white guys in their cell. So there were like four cells, you know, one very, very crowded with the black guys, one pretty crowded with the women, and then these two cells for the white people.

And we got some special – I don’t know, to use the word ‘harassment,’ but the police, you know, did come around and really question us, ‘Well, what do you guys think you’re doing? You know, we could understand how these black students might be against segregation, but why are you in here?’ And you know, there was a little bit of tension that way. And it was much more – that, for me, was the most scary part, just to be separated away from the group.

And I was talking with Bernard and James and Charles downstairs. If the singing hadn’t been so strong, I think it would have been really hard, but we could hear the singing from the other cells.

And then they would call down, they’d say, ‘Now, Barbara and Candie, are you all singing?’ You know, what would you like to contribute.

‘Are you dancing over there?’ You know, it was a connection. The music made a connection which was very important.”

Looking to keep the young kids in your life engaged this summer? Learn more about freedom songs and make your own maracas using household items for Summer Challenge. 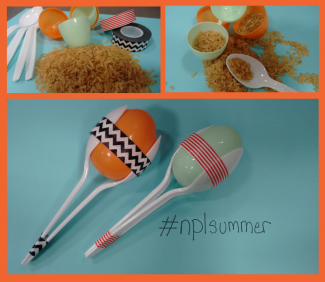 We Shall Overcome: The Story of a Song

Freedom Song: Young Voices and the Struggle for Civil Rights Nobody Gonna Turn Me 'Round: Stories and Songs of the Civil Rights Movement

Soundtrack for a Revolution