December 10th is Human Rights Day and the library has the information to help you answer "What is that?"

Human Rights Day is observed each year on December 10th.

There were countries who did not approve of the Declaration. Those countries were: Byelorussian SSR, Czechoslovakia, Poland, Saudi Arabia, Ukranian SSR, Union of South Africa, USSR, and Yugoslavia.

This document continues to update and have additions. Other organizations have created their own versions of Human Rights. Here is a link for a pdf version of the Universal Declaration of Human Rights that is free. 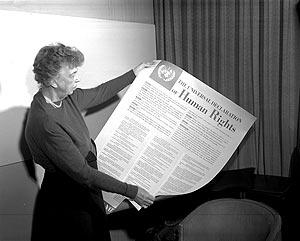 Special Collections at the Main Library has an entire room devoted to human rights and civil rights called the Civil Rights Room. Currently, a selection of books are on display that are about Human Rights and Civil Rights.

Here are a sample of books that are always available in the Civil Rights Room: The Philosophy of Human Rights

By Patrick Hayden
A sample of materials available for check out/reservation are:

The History of Human RIghts: From Ancient Times to the Globalization Era