Glen Campbell died yesterday. While his death was not unexpected, it does give us pause to look back on his stellar career and graceful goodbye. 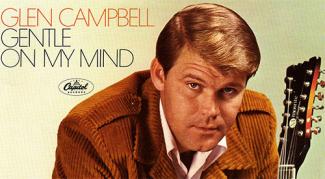 Born in Arkansas, the seventh son of sharecroppers, he started playing guitar when he was four years old. Campbell became a skilled instrumentalist early on. His guitar licks gave him entrance to the recording sessions scene in the 1960s. Campbell belonged to the famed L.A. sessions group the Wrecking Crew, working with top performers of the day including Frank Sinatra and Elvis Presley.

Most fans came to know Glen Campbell as a vocalist with the 1967 release of the John Hartford-penned Gentle on my Mind. For this, he took home Grammys in pop and country. Radio hits followed over the next two decades. He appeared in the Golden Globe-nominated film True Grit, and sang its Academy Award-nominated title song.

The '70s and '80s found Campbell fighting the demons of cocaine and drink. In between he sang "Rhinestone Cowboy", married, broke hearts, played Branson and was arrested. He also found love, faith and a steady life partner in former Rockette Kim Woolen.

In 2005 Glen Campbell was inducted into the Country Music Hall of Fame. In 2011 Campbell and wife Kim announced Glen’s diagnosis of Alzheimer’s. Glen toured throughout 2011 and 2012 with three of his children alongside on stage. This journey is captured in the documentary film, Glen Campbell: I’ll Be Me.

Gentle on my mind, indeed.

Laurie works in the Collection Development Department. She selects adult music, movies, and non-fiction titles for Nashville Public Library system. Born in Brooklyn and raised in East Tennessee, Laurie has lived in Nashville for 15 years.