Going on 60 years ago, Nashville followed suit with the landmark 1954 case Brown v. Board of Education, and began a "stair-step" plan to integrate public schools. But it wasn't without difficulty or a strong pushback.

60 years ago this month, a mere 3 years after the Supreme Court's monumental Brown v. Board of Education decision, Nashville's "stair-step" plan to integrate public schools officially began. While the Special Collections department on the 2nd floor of the Downtown Library has quite a bit more content in reference to the integration process (including a display in the Special Collection's Conference Center), we have a few documents here in Metro Archives from the city's controversial school integration process.

While the photos and news clippings added to this post are from Archives, I have to admit the information I've done my best to paraphrase is from a circumstantial article I found from the journal Southern Spaces. If you're interested in learning more about Nashville's contentious history with school integration, check out John Egerton's article here. 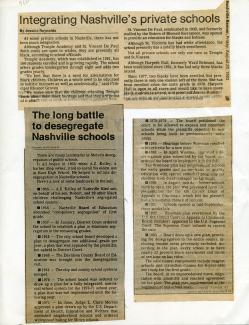 Prior to integration, the schools in Nashville and Davidson County were split into 4 different systems. They were separate but overlapping districts for white students and Black students, both in the city and county. According to Egerton's numbers for 1954, there were about 10,000 Black students and 20,000 white students in the city schools. In the county, there was about 30,000 students, with 90% of those students being white.

Though Metro Government wasn't formed until 1963, talks and initial beginnings of consolidating were already present at this time as well. 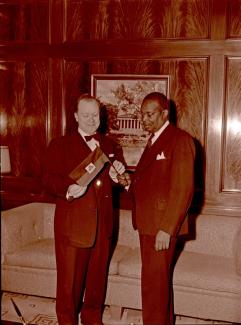 It almost seems unnecessary that I should say that the school integration process in Nashville was convoluted to assemble and unfortunately controversial. Why was it controversial, you ask? Well, even though it was the federal government deeming segregation unconstitutional, Nashville and Davidson County (this was just prior to government consolidation) weren't sure how to approach the change and therefore did nothing at first. The following school year after the Brown v. Board decision did not see a change to the school systems.

It took a heavy push by local lawyers and integration supporters before a plan was officially enacted. Two Nashville lawyers that were big, contributing factors to the fight were Z. Alexander Looby (see photo - he's on the right next to Mayor West), the chief NAACP attorney in Tennessee, and his associate Avon Williams, Jr., the lawyer that would later become the state's top civil rights lawyer and a notable state senator. And even when it was finally enacted, it wasn't a complete integration of all schools.

The plan that was enacted by the Board of Education was to "stair-step" the integration process, a.k.a. integrate one grade a year. This plan came about in March 1956, after the lawsuit Kelley v. Board of Education was filed by Looby, Williams, and Marshall against the Nashville city schools on behalf of 21 African American students. A.Z. Kelley, the father of one of the students, agreed to be the lead plaintiff. The plan offered a compromise with the only hitch that the plaintiffs' attorneys requested that the schools be integrated within a certain time frame. As you can tell from the news clipping above with the timeline, that didn't quite happen either.

Despite the attorneys in the Kelley v. Board of Education case disagreeing with the plan as it would not provide any help to their plaintiffs, it was still eventually approved by Judge Miller in the spring of 1957. It met the court's standards of "all deliberate speed", and even became a model for other southern cities that were hoping to approach desegregation slowly and minimally.

The new integration plan was set to be effective for the fall, starting on September 9th.

Schools that DID integrate fully in Tennessee, just after the Brown decision: 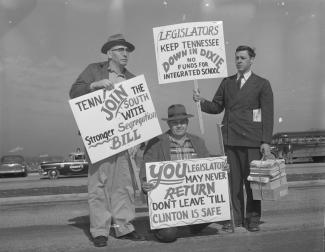 During the limbo period before the board finally enacted a plan, the opposite side of the spectrum was using the undecided time to spur protests and rallies. Bombings at schools in the area and in other parts of the state were some of their violent threats, one of the most notable occurring at Clinton High School, near Knoxville.

In January, 1956, when the U.S. District Court in Knoxville ruled that the Anderson County high schools should be desegregated by the fall term, the protests amongst segregationist supporters became disturbing. The worst being the bombing at the high school on an early Sunday morning in October.

One person that's mentioned many times in this article in regards to being a profound supporter of segregation as well as being an instigator in general is Frederick John Kasper. Not even a native Tennessean, but definitely a bigot, Kasper showed up to any city that was under crisis or debate over segregation, with the mission "to protect and defend the purity of the white race."

This guy, let me tell ya - according to Egerton's article, he can be blamed for inciting quite a lot of destruction and violent protests in the South. This includes the bombing at the Hattie Cotton Elementary School during the first week of integration in September, 1957. This appears to be the last time he would wreak havoc in the name of segregation, as he was arrested shortly after the bombing occurred and the police were determined to keep him behind bars. Egerton has more about his fate in the article.

Like the barrage of harrassment the students received when entering Central High School in Little Rock on September 4th, 1957, the African American students in Nashville that walked into their newly integrated schools dealt with the same violent behavior. Protests, attacks, bombings, you name it and Nashville saw it. Here's the link to Egerton's article again if you'd like to read more about the violence that Nashville endured during this time of hopeful change. 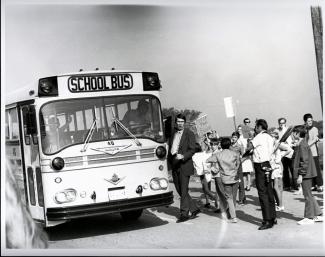 Despite the optimistic intentions for the plan to gradually desegregate the schools until completion in 1968, that didn't happen. The next step that caused an uproar yet again was when Nashville schools were ordered by a federal judge to begin busing students to help reduce segregation.

According to the data that Egerton provides, in 1970, Metro Nashville's population was roughly 448,000 residents. Of that amount, 83% were racially identified as white and 17% African American. How that corresponded to school enrollment was that "white flight" to other school systems dropped the numbers of whites to 62,000 enrolled, with 21,000 African American students and 2,000 "others".

I wish I could say that this alleviated the problem too, but it didn't (at least not immediately). It took time and lots of it. Egerton ends his article with the perfect quote in regards to that as well:

"Even now, vestiges of the old inequities spawned by segregation still cast shadows in this city, across the South, and around the nation. The 'more perfect Union' remains a work in progress."

See a couple of pages from the Metro Schools Desegregation Plan below. It lists each Metro School individually, with enrollment numbers: 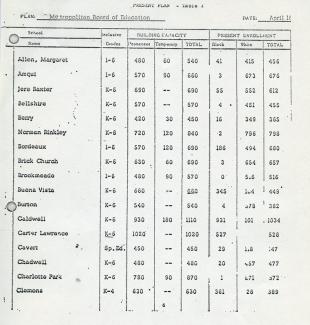 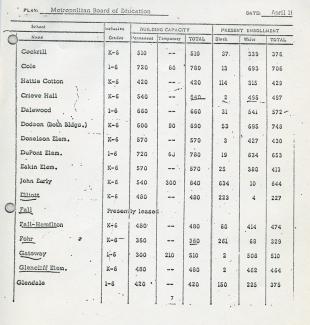 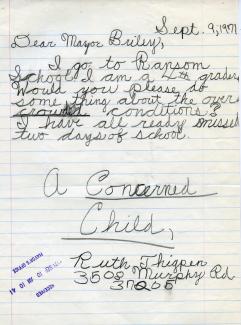 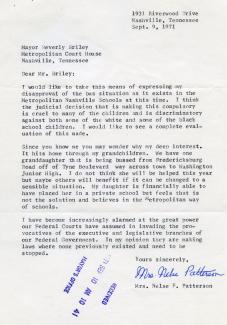 Feel free to come visit Metro Archives or Special Collections at the Downtown Library if you'd like to learn more!