Film Preservation in Metro Archives: A Day in the Life

Welcome to the fifth post in Nashville Metro Archives’ Audiovisual Conservation Center’s blog mini-series! In this series, you are invited in for a behind-the-scenes look at our year-long project to conserve and catalog the archive’s rare and unique film collection.

In our first post, we described our audiovisual collection and the main reason why this project is so timely. In later posts, we talked about how archivists inspect films and gave you an exclusive look at what a film looks like before it is projected.

This week we’re taking you through a little story from the film’s perspective. It’s a day in the life of one of the films in our collection. Are you ready? Let’s start at the very beginning…

Picture this: A little can of film sits in its box on a shelf in the archive storage area at Nashville Public Library. Our little film was born almost 45 years ago. Her finest memory is the day she was projected in large theater in 1978 for several hundred people. Her life is very different now. She is no longer shipped from venue to venue or projected at night in movie theaters. Most theaters no longer even have the equipment to play her. Now she sits quietly in the archive, surrounded by her film friends.

Today looks like an ordinary day at Nashville Metro Archives. But it’s going to be an extraordinary day in this little film’s life. Let’s take a closer look and find out why.

The story begins at 9am. All is quiet in the audiovisual storage room at Nashville Public Library. The film archivist arrives with a list of films that are to receive archival treatment that day. All of the films want to be chosen, but the archivist reaches for our little film. 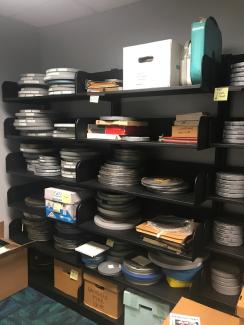 Our little film sitting amongst friends on the shelf.

The archivist brings the can to the audiovisual processing room for treatment. First, our film is taken out of her original metal film can. The film can is old now, and shows signs of wear and tear and rust from a life of heavy use. It’s not a fitting home for our archival film.

The archivist first does a visual inspection of the film to check for any major damage. Great news, this film looks to be in good shape! The film is placed on the archivist’s film rewinds. The archivist takes a clean spare metal film reel and also places it on the rewinds. Our little film is excited for the next step! 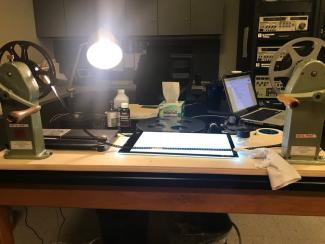 This is our little film on the rewinds during inspection.

The archivist cuts the old leader from the film and gives her a shiny, brand new piece of leader to protect the film as she begins her new life. Then the archivist winds the film around the spare reel. As she winds the film, the archivist inspects the film for breaks, tears, fading, and decay. Our little film loves the feeling of the archivist’s white gloves and the freedom of being removed from her original old reel.

After the inspection, our film is wound very carefully onto an archival core. The film loves being wound onto the core in just the right way, with no piece of film out of place-- because she knows that if the archivist winds her perfectly, her future life in her fresh new can will be a long, comfortable one.

There’s just one more step before the film is put back onto the shelf or sent to the lab to be digitized. She must be tested for a type of film decay so that the archivist can recommend the correct treatment for her. A test strip called an A-D Strip is placed in her can, and the film is placed in a holding area along with other excited little films. 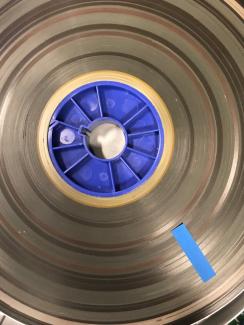 Our little film on an archival core with an A-D strip in the can.

Our little film sits in the can for about a week and waits excitedly in anticipation of the test results. More good news! The reading is a 1-- she shows a low level of decay. The archivist places a type of desiccant called a molecular sieve in the film can to slow any future decay.

It’s about five o’clock and as the sun sets, the archivist catalogs the film and makes notes on the inspection results. These details go into a database where the archivists, and later, the public, can search for the film in the archive’s collections.

As the final rays of sun sink into the horizon, the library doors close and the patrons return home. It’s almost time for the archivist to go home, too. The archivist moves the film back to the audiovisual storage room, where she is placed in her permanent location among other freshly inspected and treated films. 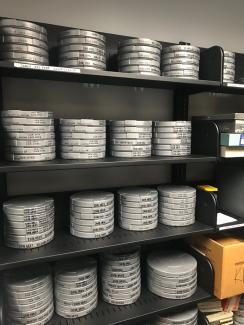 Our film back on the shelf after a full inspection and rehousing.

As she nods off to sleep, she dreams of the day that she can be digitized and watched again by all of the people-- perhaps used in a documentary or viewed by a researcher.