The 50th Anniversary of Nashville's First Hijacked Flight...and the Holidays

50 years ago this month marks the anniversary of the first flight ever hijacked flying out of Nashville. Or if you'd prefer something cheerier, continue scrolling down to see photos around Nashville during the holiday season.

Before I get to the jollier part of this post, I wanted to discuss a letter that was recently donated to us from a Nashville citizen regarding what is believed to be the first flight hijacked out of Nashville (as far as we know, this was the first airline flight hijacked out of Nashville). I know, not the most cheerful of topics, but relevant because this month marks the 50th anniversary of the incident.

The letter we received is from a family member of one of the flight's passengers. It's essentially an apology letter from the airline to the passenger...an interesting one at that. Interesting as in it sort of downplays the incident a little, calling the hijacking an "inconvenience". See the letter for yourself here... 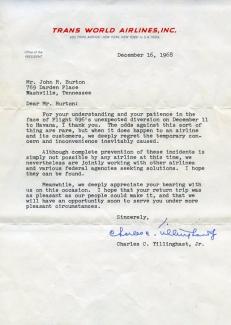 Letter from TWA to passenger of the hijacked flight, John R. Burton

Trans World Airlines was the airline as you can tell by the letterhead, and the flight was traveling from Nashville to Miami; on its inaugural flight, no less. The date was December 11th, 1968 - a different time in U.S. history in a variety of ways, including security checks prior to boarding. If there were any prior to this flight boarding, I'd be surprised because the hijacker evidently took over the flight with a gun. The history of security in airports is brief given that TSA was created in direct response to the 9/11 attacks on the World Trade Center and the Pentagon. Prior to the government's creation of that agency, security at airports was something that was handled by private companies. 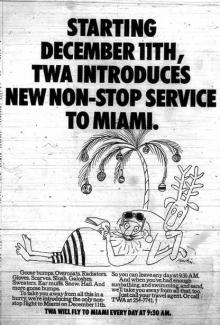 When the 9 passengers from Nashville boarded, some of them were making jokes about being hijacked - even more evidence that this was a different time.

Here are the names of the passengers who boarded the plane in Nashville (according to the Tennessean), starting with the recipient of the above letter...

Burton, the recipient of the letter, was on his way to a grocery convention in South Florida.

The country-western star, Tex Ritter, apparently had starred in 78 western movies by that time, and was known for outwitting the bad guys. However, his skills didn't quite translate into real life, and he had told the Tennessean that he didn't think that an airplane was the best place to be taking away a gun from a man. He had a good point. He also said that the only difference between the hijacking and his western movies was "that there was no posse following us."

Ritter was on his way to perform at Marathon in the Florida Keys on one night, and then at Key West the following night. He was apparently urged not to take the flight due to the fact that he was suffering from the flu. His band had left the day before, driving down, while he hung back to rest and try to get rid of his illness. 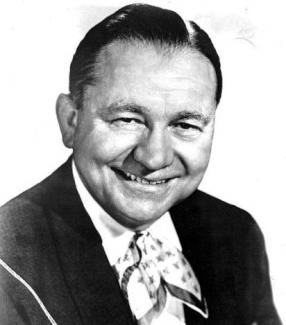 Passenger Mason Rudolph, the golf pro from Clarksville, was ironically reading the book "The Power of Positive Thinking" by Norman Vincent Peale when the plane was hijacked. In regards to the book helping during the hijacking, he said "Man, it didn't help very much." He also said that he didn't take a good look at the gunman because he was afraid he'd start shooting at him. Rudolph was on his way to the Lehigh Acres Country Club near Ft. Myers, Fl., which sponsored him on the professional golfers tour.

Alton Lewis Andrews was traveling to his home in Miami for the Christmas holiday. Upon arrival finally in Miami, he was "mobbed by his tearful mother and four of his seven sisters."

Now that you have an idea of who was on the flight, and what this flight's significance was, here's what happened. About 20 minutes after the flight took off from Nashville (about 10 miles south of Chattanooga), the flight was hijacked. There were 2 hijackers -  a man and a woman - and according to the news stories after the fact, the 2 boarded the plane in St. Louis, after flying there from Los Angeles.

According to the pilot, the hijacker evidently took one of the stewardess' into the pilot's cabin, in a very calm manner, holding a gun to her. He told the pilot, "if you take me to Havana, nobody will get hurt." The pilot then radioed to the Atlanta tower and told them that the plane had been hijacked, and that they were proceeding to Havana.

When they arrived in Havana, Cuban Security Police escorted the hijacker and his accomplice from the plane. The hijacker was described as being a 5-foot-7, 140 pound African-American man. The woman with him was described as also being African American and was approximately 6 months pregnant.

While most of the passengers were not interrogated by the Cuban Security upon arrival, one of them was - Alton Andrews. He told newsmen when he arrived in Miami that he was interrogated "for some time," and that they asked him questions about how he felt about hijacking. But he said that they did not ask him any questions about race relations in the United States.

It was first believed that the hijacker was a man by the name of Eldridge Cleaver, a fugitive Black Panther leader who was wanted for parole violation in California. But after the pilot was shown a photo of Cleaver, the pilot denied that he was the same man that hijacked the plane.

In later stories that I read, it was determined that the couple that hijacked the plane were young, approximately in their early 20's, because they were flying on youth fares (and youth fares were restricted to ages 22 and younger). They purchased the tickets under the names E.C. Ellis and G. Harvey. The FBI was unsure if these were their real names, but apparently any tickets purchased under youth fares usually required an application with identification and proof of date of birth.

While the passengers waited for several hours in the Jose Marti Airport in Havana, they were fed steak, potatoes, sandwiches, beer, and grapefruit juice, according to Tex Ritter. They were eventually put on a bus to take them to Varadero, Cuba, to then board a chartered flight to Miami.

The crew were released about 8 hours after the hijacking to fly to Miami. There, they were questioned by the FBI before talking with any newsmen.

One of the other passengers, Mrs. Allen Eskind, said after she arrived in Miami that..."it wasn't a bad trip - if you had a good constitution." This same passenger also was carrying a magazine article about plane hijackings and had also received advice from her husband about what to do if the plane was hijacked. So of all people, she should've been prepared.

Another passenger - Mrs. Charles Nickens - said, "I hate to admit it, but it was fun after the first few minutes."

The wife of Mason Rudolph apparently had a premonition that the flight would be hijacked, and had asked her husband not to go.

This was the 38th hijacked flight to Cuba since May, 1961 (and flights to Cuba were often hijacked during the 1970's as well). But it was apparently only the 2nd hijacked flight to have the crew and passengers returned to the U.S. in the same day.

The Holidays in Nashville...

Now this is the part where I stop writing and you get to enjoy some pictures. I've rounded up several photos from past holiday seasons in Nashville, and thought it'd be nice to share. I'm also including a few photos from our Presidential Christmas Card collection. I apologize if any are repeats from past posts. Enjoy and Happy Holidays!