Welcome to the sixth post in Nashville Metro Archives’ Audiovisual Conservation Center’s blog mini-series about film preservation. Throughout this series we have taken you through the process of identifying, conserving, and rehousing over 400 rare and unique films from our collection. In this post we will highlight the content of one of our larger film collections. Thanks for joining us!

In our third post we briefly mentioned the James Kilgore Collection. In this post we will take a deeper look at Mr. Kilgore’s collection and the legacy he left to Nashville Metro Archives. 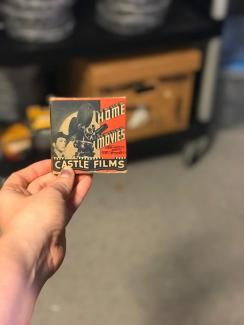 James Kilgore lived in Nashville his whole life. He was an avid amateur filmmaker who began shooting film at 14. He served in Italy during WWII and was able to document his experience using not just any old film stock, but he used color film which was rare for an amateur filmmaker in the 1940s. Mr. Kilgore’s fascination with and dedication to amateur film-making gave him cause to stay well-informed about all the latest film and video technology, so the Kilgore collection contains many unique materials including magnetic sound and color film. He even included special editing effects along with title and end cards for many of his home movies and church films.

The content of Mr. Kilgore’s collection ranges from home movies during family vacations to chronicles of his local church’s retreats and youth group plays to footage from WWII. The film formats that we inspected ranged from 8mm to Super-8mm and over 15,000 feet of 16mm film. The dates of the materials we processed range from about the 1920s to 1985.

I would like to highlight a few of my own personal favorite films that I inspected from the collection. We had inspected about half of the films in Mr. Kilgore’s collection when I came across a short little 50 foot 8mm reel of film. The title was written on the outside as “Farewell ‘54, Hello ‘55”. This was the title that was written on the title card of the film as well. From what I viewed during inspection, this film contains color footage of a New Year’s Eve party in 1954. The shots of the party are really quite magical and they include men and women wearing gold hats, posing with noisemakers, the tables set up for guests with plates, glasses, and a punchbowl, along with little children in matching festive outfits. It is such a short snapshot of a moment in time, but a unique occasion that will forever be remembered.

A 300 foot 8mm film titled “Vacation 1939” is another favorite from the collection. This is a black and white film that features shots from a Kilgore family vacation to Statesville, NC. Most of the footage is scenes of Statesville streets including the movie theater and monuments. The film is in great condition and has been added to the priority list for digitization because of its local and regional significance.

On another small 8mm reel is a home movie just labeled “Kabobs.” I didn’t know what to expect with such a short title, but I was pleased to find that the film contained shots of a family picnic. It includes footage of a woman preparing and grilling kabobs and continues with shots of little children happily eating the food at picnic tables. The date on this film is 1955. 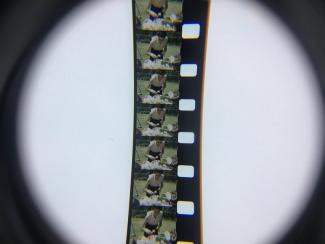 This is a photo of a film frame from the "Kabob" film shown through a film magnifying glass called a lupe.

A few more titles from the collection include “Winter and the frozen Cumberland,” “A Day at Camp Boxwell [Boyscouts, 1940],” Shrine Circus, 1946,” “Sidewalks of New York,” “Soldiers Play Instruments, 1930s,” and many more various vacation footage.

We are so grateful to have had the opportunity to inspect and rehouse a collection like the James Kilgore Collection. I don’t know if Mr. Kilgore would have guessed that his films would be preserved nearly 90 years after they had been made, but the contribution of his work will certainly impact and add to the rich history of Nashville and the surrounding area. A huge thanks to Mr. Kilgore’s daughter Fay who generously donated his materials to Nashville Metro Archives. 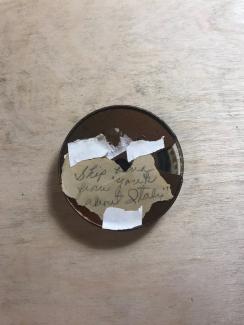 A unique small-gage film reel found in the Kilgore collection. This particular reel has a note attached to the outside. 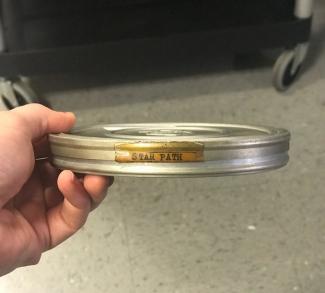 Film can holding an 8mm film from the Kilgore collection. The film is titled "Star Path" 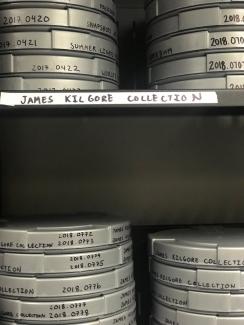 This is just a fraction of the rehoused Kilgore films on the shelf in audiovisual storage.

Special thanks to the Al Larvick Fund for digitizing portions of the James Kilgore Collection.