If you’re of a certain age, you probably have some experience with mixtapes. Mixtapes are great, right? 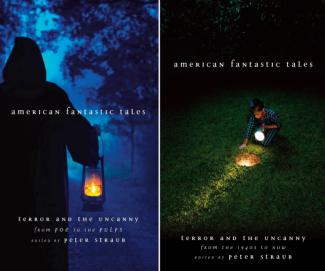 There are even NPL mixtapes on our blog. What if you wanted a mixtape, but, like, for books, and all from the same genre? That totally exists. It’s called an anthology. You already knew that, of course. With this known knowledge, you owe it to yourself to indulge in the spookier side of autumn with a solid horror anthology. While some anthologies revolve around a specific theme - “Things With Claws” (1961), “Silver Scream” (1988), “More Deadly Than the Male” (2019), etc. - many are chronological, whether year-end best-of omnibuses, or compilations from a specific time period. Of course, not all horror story collections are created equal, but quite a few are worth seeking out.

Edited by Peter Straub, ‘American Fantastic Tales’ is a two volume release from the Library of America. Volume one, subtitled ‘From Poe to the Pulps’, covers just that: Edgar Allan Poe’s ‘Berenice’ (1835) all the way up through Robert Bloch’s ‘The Cloak’ (1939). Technically, the first volume backs up to before Poe, leading the collection with pieces by Charles Brockden Brown and Washington Irving, and in doing so gets closer to the actual start of America, and by extension the American horror story tradition.

You’ve got your all-stars here: Charlotte Perkins Gilman, Lafcadio Hearn, Ambrose Bierce, Henry James, and H.P. Lovecraft, among others. But you’ll also find some authors you might not expect (Herman Melville and F. Scott Fitzgerald), as well as other less anthologized purveyors of the weird (Francis Stevens and David H. Keller). In short, there are plenty of enjoyably eerie tales across almost 700 pages.

Volume two continues the literary buffet with recognizable names like Shirley Jackson, Truman Capote, and Michael Chabon. Picking up the in the 1940’s, it covers the decades leading up to ‘now’, which in this case is 2007. The downside to a set like this is obviously the lack of international flair. But that’s also the point; this two-part anthology seeks to explore the ways in which tales of ‘terror and the uncanny’ have changed in America over the last 200 years. There are plenty of great horror stories from other countries, and other anthologies that gather them, but as we head toward Halloween - the uniquely American version of it, that is - pick up a copy of ‘American Fantastic Tales’ and discover who influenced some of your favorite writers of today.

American Fantastic Tales: Terror and the Uncanny From Poe to the Pulps

American Fantastic Tales: Terror and the Uncanny from the 1940's to Now

Great Tales of Terror and the Supernatural

The Best Ghost Stories Ever Told