Initiative at NPL Supports the Providers who work with young people 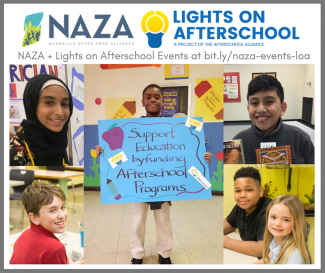 Since 2017, the number of 13-year-old crime suspects in Nashville has nearly doubled.

That’s the result of data released by the Juvenile Court of Metropolitan Nashville and Davidson County in The Tennessean in February. Among other things, the report cited a lack of quality afterschool programming as one of the biggest reasons why younger people get involved in crime.

The Drastic Need for Afterschool Programs

The hours between 3 – 7 PM are when young people are most likely to either commit or become a victim of crime, studies show. In fact, more than 170,000 K-12 students in Tennessee are unsupervised and at serious risk during that time, according to national afterschool advocacy group the Afterschool Alliance.

This research makes the case for afterschool programs, which can help keep young people positively engaged and safe–and for organizations like the Nashville After Zone Alliance (NAZA), which supports the providers on the front lines of afterschool.

The challenge is demand for afterschool programs far exceeds the supply. Only about 17% of Tennessee middle schoolers are enrolled in an afterschool program, while another 42% would enroll if a program were available. That leaves more than 263,000 students waiting for a program opening, according to the Afterschool Alliance’s America After 3PM initiative.

NAZA is here to narrow that gap in the Metro Nashville area.

Housed in Nashville Public Library (NPL), NAZA is a partnership of  the library, Metro Nashville Public Schools (MNPS), the Mayor’s Office, and more than  20 youth-serving organizations that all collaborate to improve the learning experiences of youth in out-of-school settings throughout Nashville. NAZA invests funding in afterschool and summer programs that engage middle school students who would likely otherwise not have access due to cost, transportation barriers, and/or language barriers.

“It is important to continue funding afterschool programs because they not only yield individual benefit for a young person, but a benefit for their working parents who are still unable to access enrichment and afterschool opportunities, as well as the community on the whole. These programs keep youth engaged in positive learning experiences,” said Anna Harutyunyan, the executive director of NAZA.

Launched in 2010, NAZA was created to combat the flagging high school graduation rate in Nashville. Then mayor Karl Dean was adamant that students receive access to more programs that help them stay engaged in school, perform well academically, and stay out of trouble.

To date, NAZA-funded programs have served nearly 14,000 students, while more than 12,000 others have benefitted from professionals trained by NAZA. With more than 44 afterschool program sites and 27 MNPS schools participating, there are very few areas in Metro Nashville where NAZA hasn’t made an impact.

“NAZA has been a tremendous help in allowing our students to explore their world. This month, our students will attend another NAZA-provided field trip to the Nashville Children’s Theatre to see a play ‘that confronts the complexities of immigration and citizenship,’” said Rosemary Sherrod, Director of Social Services at Global Outreach Developments International, a NAZA-funded program. “Those students who have experienced first-hand the issue of immigration will sit together with students who have not. These are real issues for our students and we are grateful for NAZA to allow children to share these experiences in a safe place.”

It’s not only students who benefit from NAZA’s support.

“My child’s program cut the time that she was alone, because she would be here with other kids, doing her work, and getting the supervision that she needs,” said the mother of a student in a NAZA-funded program. “By the time I'm coming home, if I've had a late night at work, it's all taken care of. It's like stress off my shoulders and I'm thankful and grateful that she had the opportunity because who knows?

"I just know how it could go left. Totally go left instead of just being right.”

Celebrate with NAZA During “Lights On Afterschool”

On Thursday, Oct 24, NAZA will join with the Afterschool Alliance to celebrate “Lights on Afterschool.” The day is filled with open houses, workshops, and other events to showcase the work of afterschool programming at more than 30 NAZA-funded sites throughout the Metro Nashville area.

NAZA hopes these events will raise awareness of the benefits of afterschool programs and draw support from legislators, businesses, and community leaders.

You can find a full listing of “Lights On Afterschool” events on NAZA’s website.