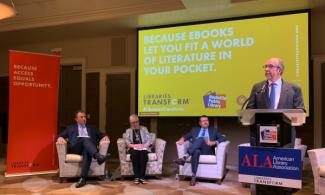 NPL director Kent Oliver speaks about eBook access at an ALA press conference in September, 2019. (Emily Gardner/American Library Association)
Nashville Public Library (NPL) will suspend eBook purchases from book publisher Macmillan beginning Tuesday, November 5 until spring 2020.
Library leaders want Macmillan to stop its new eBook embargo, which began November 1. Under this embargo, NPL is able to buy only one copy of each new eBook during the first two months after a new title is released — the peak time for reader demand.
Until now, the library has purchased Macmillan eBooks at nearly four times their retail price, buying enough copies so readers must wait no more than four months to borrow them.
“We hope our decision today sends a message on behalf of all library readers, especially customers who love to read eBooks and also folks who can’t or don’t want to have to buy titles in order to enjoy them,” said Kent Oliver, NPL director.
An estimated 10,000 NPL customers borrow their books exclusively in digital formats (eBooks and eAudiobooks). In fact, NPL’s eBook usage has increased by nearly 20% since last year.
“This is our way of reminding Macmillan that libraries and the millions of readers they serve are longstanding members of the literature world,” Oliver said. “We don’t want to be cut out of that ecosystem.”
In September, NPL joined the American Library Association and other U.S. public libraries to protest Macmillan’s planned embargo, asking readers to sign ALA’s #eBooksForAll petition.
So far, Tennesseans have contributed 5,761 of the total 170,315 signatures.

Below, you’ll find answers to many of the questions we’ve received about our decision to suspend purchases of new Macmillan eBooks. We will continue to update this page as we receive new questions.

1. What eBooks will be affected?
New eBook titles published by Macmillan or the publishers it owns after Tuesday, Nov 5, 2019. These titles will still appear in our catalog in other formats, but will not be available in eBook format.

2. What other publishers does Macmillan own?
Following is the full list of Macmillan-owned publishers that will be affected by the purchase suspension.
Adult/Young Adult
Children’s
3. What about Macmillan eBooks that NPL already has?
Macmillan eBooks already in our collection will remain. You can continue to place hold requests and check them out as usual.
If you have a Macmillan eBook checked out right now, it will not be affected in any way.
4. Does this include Macmillan books in all formats?
No — this decision only affects the eBook version of new Macmillan titles. We will continue to purchase print, audiobook, and eAudiobook versions of new Macmillan titles.
We will also purchase additional print copies of new titles at the time of release to make up the difference.
5. If I submit a purchase request for a new Macmillan eBook, will it automatically be rejected?
Yes — any purchase requests we receive for Macmillan eBooks released after Nov 5 will not be considered.
Purchase suggestions for all other Macmillan formats will be processed and considered as usual.
6. I don’t really know much about Macmillan. What books do they publish?
Macmillan is one of the “Big Five” book publishers in the world, along with Hachette Book Group, HarperCollins, Penguin Random House, and Simon & Schuster. They publish a wide variety of fiction, nonfiction, and other genres from hundreds of different authors.
One popular author they represent is Nora Roberts, whose popular fiction series, Chronicles of The One, consistently makes bestseller lists across the country. The upcoming third installment of the series, The Rise of Magicks, releases Tuesday, Nov 26.
NPL will buy copies in all formats of The Rise of Magicks except the eBook version.
7. How long will this suspension last?
The suspension will last at least until spring 2020, but that date is subject to extension. Should Macmillan cancel their embargo during that time, we will immediately lift the suspension.
8. I want Macmillan to stop their embargo, or at least offer better terms to libraries. What can I do?
Thank you so much for your support of NPL and equal access to eBooks! You can let Macmillan know how you feel by signing the #eBooksForAll petition at www.ebooksforall.org.
You can also use the #eBooksForAll hashtag to spread the word on social media and lead other readers to the petition.
9. How many of the books the library buys come from Macmillan?
We currently have 11,573 eBook titles in our catalog. Of those, 576, or about 5%, are Macmillan titles. These titles account for about 8% of all eBook checkouts.
10. Why don’t you at least take the single eBook Macmillan is offering so I have some chance of getting it from the library?
We believe everyone deserves equal access to literature and information. In our view, Macmillan’s embargo sends the message that only those who can and will pay for access deserve it. That’s why we’re so adamant that a suspension is the next step we must take.
Additionally, your chances of getting access to that single copy in the first two months are slim. We have dozens, sometimes hundreds, of patrons who place holds on new eBooks. Everyone can hold or check out an eBook for up to 24 days, which is nearly a month. By the time you move to the top of the queue, odds are, it will have been several months already.
We understand that this is frustrating for you, just as it is for us. We’re fully aware that our decision won’t please everyone, but we firmly believe that this suspension is the best way we can support eBook readers and ensure equal access for libraries to digital materials.