As schedules and lives only get busier, a quick dose of weird might be just what you need. 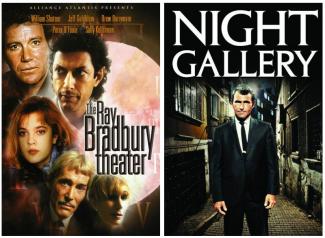 The genre anthology TV show is here to provide that dose. In the years since the immortal Twilight Zone first appeared in 1959, there have been numerous entries in this format that have focused on science-fiction, horror, fantasy, mystery, and suspense. Some of them, like Out There and Science Fiction Theatre actually predate ‘Zone’, but are basically lost to history by comparison. The concept is still around today (Black Mirror, yet another version of The Twilight Zone), but for my money some of the most enjoyable content came out of the 80’s.

Big names like Steven Spielberg and George Romero each had their own creations realized in Amazing Stories and Tales from the Darkside, respectively. Famous authors also adapted their own work or were heavily involved in the creation of a show (The Ray Bradbury Theater, Roald Dahl’s Tales of the Unexpected), and Hammer Films released its own new iteration in Hammer House of Horror. Many of the well-worn tropes are here: ghosts, demons, monsters (also a separate anthology series from the 80’s: Monsters), cursed objects, murderous spouses, generally unexplainable phenomena, etc. While some series are thirty minute episodes and others spring for the full hour, all are a great way to slip some strange into your life.

Only very few of these shows are available with your library card, but let me highlight two specifically. Ray Bradbury personally adapted or wrote all 65 episodes of The Ray Bradbury Theater, and his unique affection for nostalgia, wonder, and terror comes through intact. As was the case with many such series, famous faces are likely to show up in random episodes, so keep an eye out for cameos. Rod Serling followed up The Twilight Zone with Night Gallery, a similar series from the 70’s that prioritized horror over science-fiction and used bizarre paintings hanging in a potentially haunted gallery as starting points for stories. Not every show or episode was created equal, and part of the appeal of the older anthology shows is the datedness of the effects or acting. But the overall vibe is pleasurably macabre, and if you have any taste for the fantastic, try an episode or two and see if you don’t get hooked.

Tales from the Crypt

The Nightmare Worlds of H.G. Wells