Music that Makes the Movies 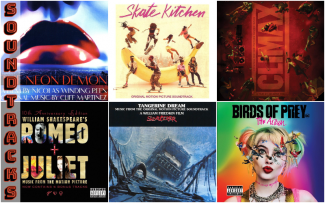 Music is integral to world-building in films. Here are some soundtracks and scores that do this particularly well.

Citing influences like Goblin, Kraftwerk, Giorgio Moroder, and Tangerine Dream, composer Cliff Martinez creates a cold kind of posh outer-space disco lullaby for this high fashion horror film about an aspiring model that gets swept into the dark underbelly of Los Angeles. Neon Demon is Martinez’s third collaboration with filmmaker Nicolas Winding Refn - the others being Drive and Only God Forgives. You might also recognize a couple pop songs from Sia and Sweet Tempest.

A dramatized film about and starring the New York group of girls who inspired it, Skate Kitchen explores what it’s like to be a woman in the world of skateboarding. Featuring artists like Khali Uchis, Clairo, Aska Matsumiya, Future Brown, Princess Nokia, Jaden Smith, and Khalid, the soundtrack provides a dreamy summer day accompaniment to Crystal Moselle’s movie.

Gaspar Noé‘s Climax is one big nightmare of a dance party, but almost like a fun nightmare until all of a sudden everyone realizes that someone dumped LSD in the punch and chaos ensues. The electronic dance music in the film is key to keeping the audience in a confused and paranoid trance for almost its entire runtime, which may only be 97 minutes, but definitely feels like you just experienced the entire night firsthand. The soundtrack features tunes from Aphex Twins, Daft Punk, Soft Cell, Kiddy Smile, and more.

The soundtrack for 1996’s Romeo + Juliet is a kind of funky alternative fairytale mixtape featuring folks like Garbage, Everclear, The Cardigans, Kym Mazelle, Radiohead, Butthole Surfers, and Des’ree. This contemporary “MTV-style” take on Shakespeare’s tragedy is a signature of filmmaker Baz Luhrmann, whose work also includes Moulin Rouge and The Great Gatsby.

Electronic band Tangerine Dream provides the score for this 1977 William Friedkin thriller about a group of men transporting unstable dynamite 200 miles up a dangerous South American mountain road. Also responsible for scoring films like Legend, The Keep, Near Dark, and Fire Starter, Tangerine Dream is spectacular at establishing mood, and especially in creating the tension needed for Sorcerer. You might compare their musical vibe to that of the Stranger Things soundtrack.

Birds of Prey: The Album

Megan works in Teen Services. She enjoys crafting, board games, and horror and sci-fi films. Catch her doing cosplay at NPL Fandom Fest and other conventions around town.