Am I dreaming of a white Christmas, just like the ones Nashville used to know? Sure, why not. Just as long as it's safe to drive in for all. If there's one thing all Nashvillians know (born and raised here or transplants), it's that wintry weather and local traffic DO NOT mix. And apparently never have, according to this 1962 Nashville Banner cartoon... 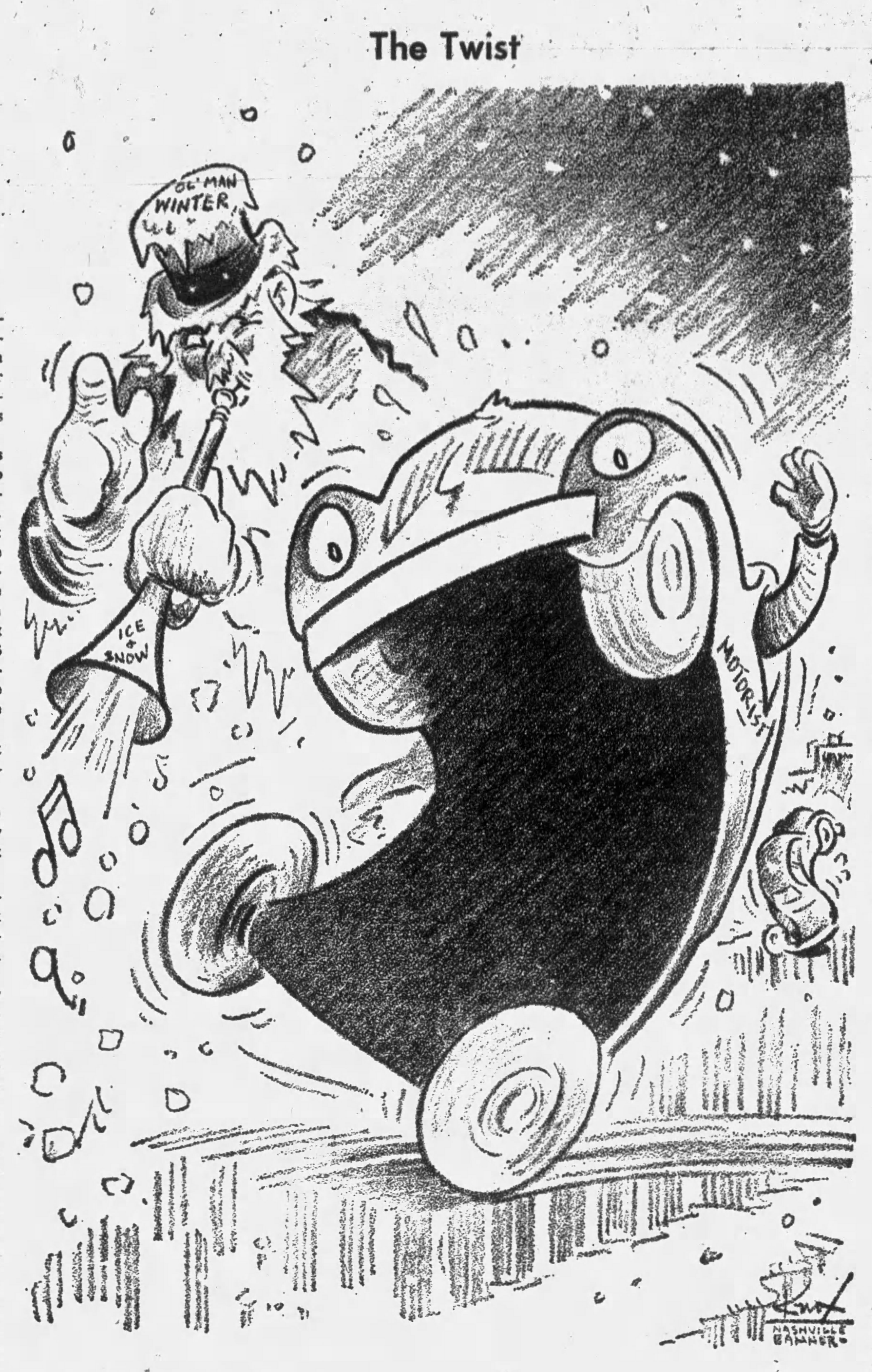 But of any day of the year, the Christmas holiday and snow are simply kismet, right? If you said no to that, indulge me a bit. In many places further north, I'm sure snow is a very common thing during this time of year. But in Nashville - ha, definitely not.

Once Upon a Time, Nashville Had December Snow!

I came across a news article from 1912 (see below), that talks about weather during the Christmas holiday. More common than any precipitation, there's been "bright and pleasant" weather. According to the article, on nine occasions, there's been rain. And on eight occasions, it has snowed.

However, when I did the math again reading through each of the weather reports provided, I counted eleven times it snowed on Christmas. I don't know what the writer considered "snowfall" to be, but technically if you simply mean snow of any amount falling on the holiday - it's eleven, dude.

Also, this info comes with the caveat that it's before 1912. AND, as you can see in the clipping, it only covers the years since the Signal Service (weather bureau) started in 1870. So whether there were snowfalls on Christmas day since the town was incorporated back in the 1780's - who knows. My guess though? Yes, there were probably many.

For this blog post though, and to keep things as brief as this writer is able to, I'm just going to highlight only a few of those eleven occurrences when Nashville got to experience a white Christmas, plus one several years after these 1912 listings. Starting with Christmas Day in 1878... 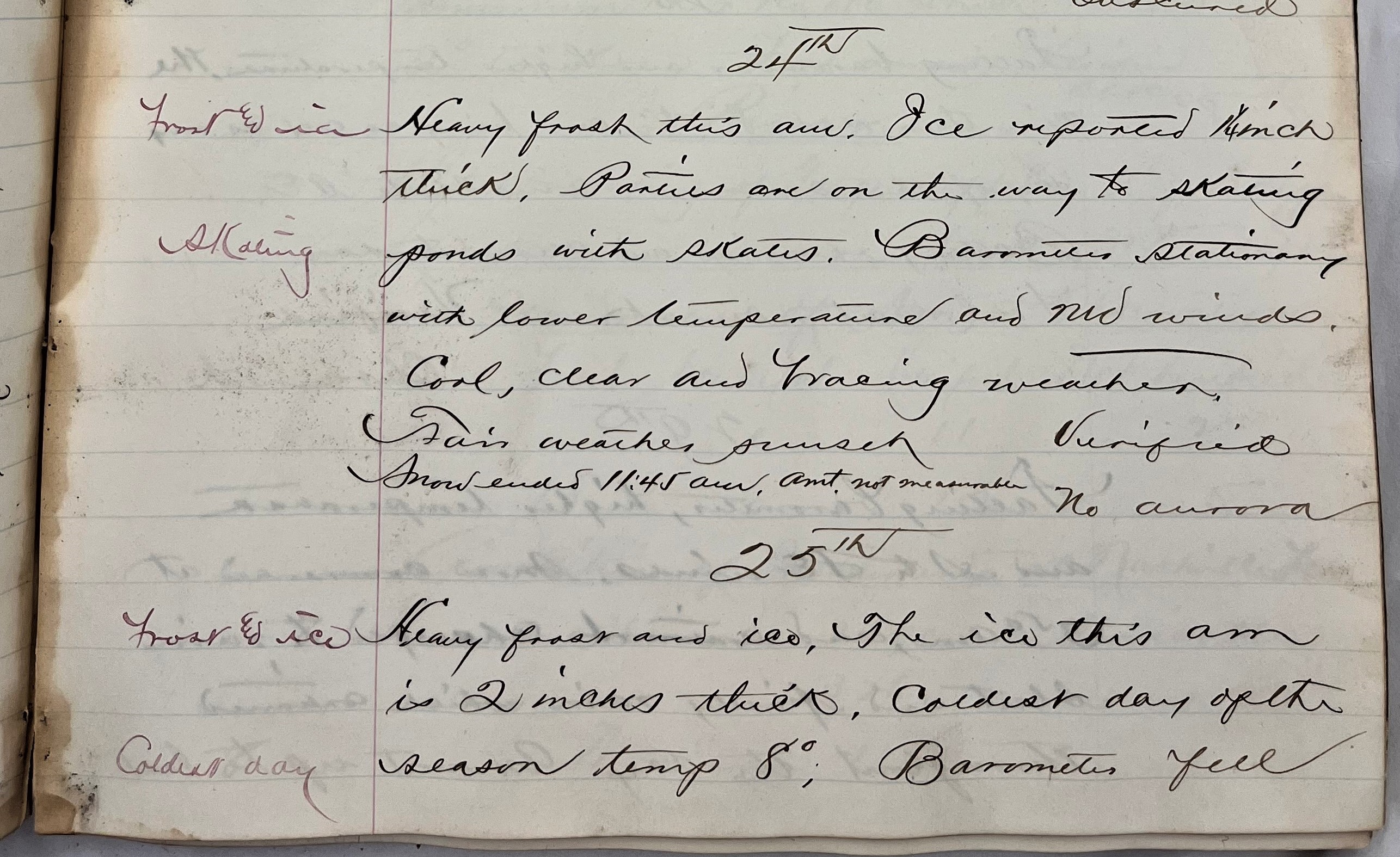 Rewind back 144 years to a year that it got sooo cold in Nashville, ice skating on local ponds was feasible.

Tracing the weather report from December, 1878 back to about the 7th of the month, it looks like the entire month of December was cold and miserable. Rain started that day that led to 1/16 inch-thick ice in the gutters. And initially, December 18th was the coldest day of the season, dropping down to 19º, but Christmas day took the cake by dropping to 8º!

"Heavy frost and ice. The ice this am is 2 inches thick. Coldest day of the season, temp 8º. Barometer fell steadily all day with W and SW winds. Clear and cold. Fair weather sunset. Verified. No aurora."

The next year, snow happened again on Christmas! How lucky!

Fast forward a little to the time Nashville got an inch of snow on the big day!

"Sky was clear in morning with a few Ci Cu moving from SW in the southern half of the sky. Sun shone at intervals till 11 a.m. when cloudiness had increased to such an extent as to cover the whole sky with a dense A S from SW. A light snow began at 3:00 p.m. and continued till 5:15 p.m. when it turned to a light mist, continuing till 7:40 p.m. Total precipitation .14, depth of snow 1.0 inch. Snow on ground at 8 p.m. 0.5 inch. A dense fog prevailed during afternoon."

This photo is not from 1897, but one of my fave snow photos from our collections instead.

And lastly, fast-forwarding 65 years to the Christmas when Nashville saw 5 inches fall quickly, with a "hard-driving wind" pushing it through. Much like the storm we saw Thursday evening.

We don't have the weather report from that year, but I do have the news clipping from the Tennessean that provides details about the storm that "prevent[ed] many working fathers from getting across car-clogged highways to their homes and families."

As you can see in the clipping, this snowfall was the first to occur on Christmas day since 1935. And even that snowfall didn't appear to compare to this one, and came as a surprise as well.

In 1935, Nashvillians awoke to about 2-3 inches on the ground. Of course, children were thrilled with this welcome surprise, playing in it all day. But another reason this snowfall was so special, despite the small amount, is because it occurred not too long after the Depression. A 1962 article from the Tennessean provided a nice recap on this aspect...

"Christmas that year was said to be the best Christmas in Nashville in five years. The Great Depression was losing its iron grip on the area and 'the return of prosperity,' The Tennessean reported, 'is reflected in increased sales."

As a native Nashvillian, I can say that I remember maybe one white Christmas in Nashville in the last few decades. So despite the fact that this year's storm is dangerous and unfortunate for travelers, I can personally say that it provides a nice little dose of magic ;)

And now, a few more snow images in Nashville (not occurring on Christmas day).

From the Parks and Recreation Collection, riverfront park after a snow... 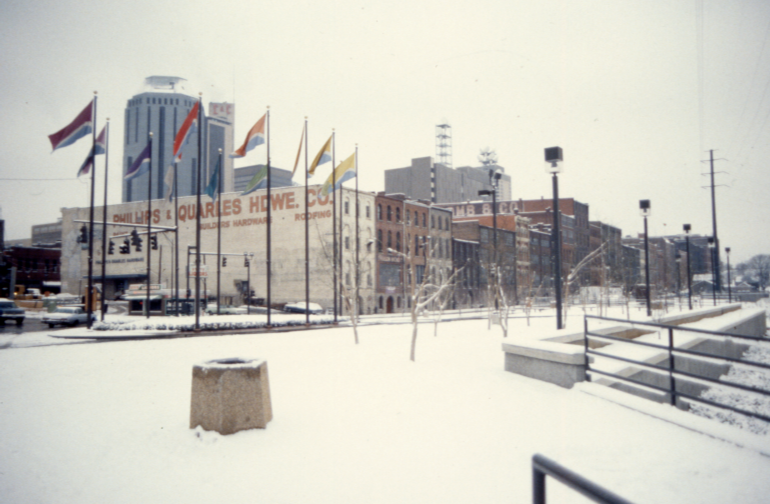 From the Hicks-Green Glass Plate Negatives Collection of Giers photography, a photo of the Cumberland river frozen over from a winter storm. 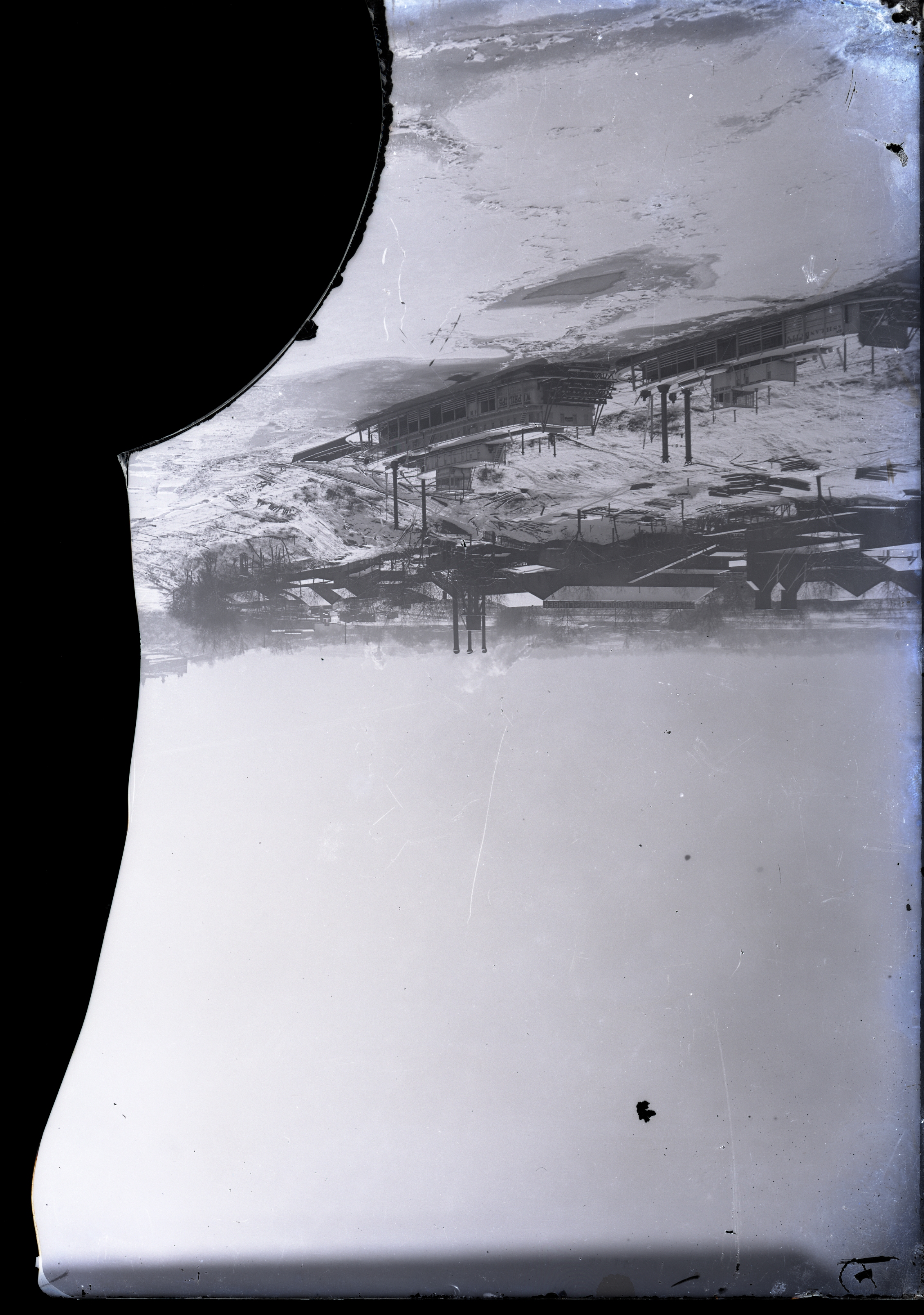 And finally, from 1974, the Christmas tree at the courthouse. 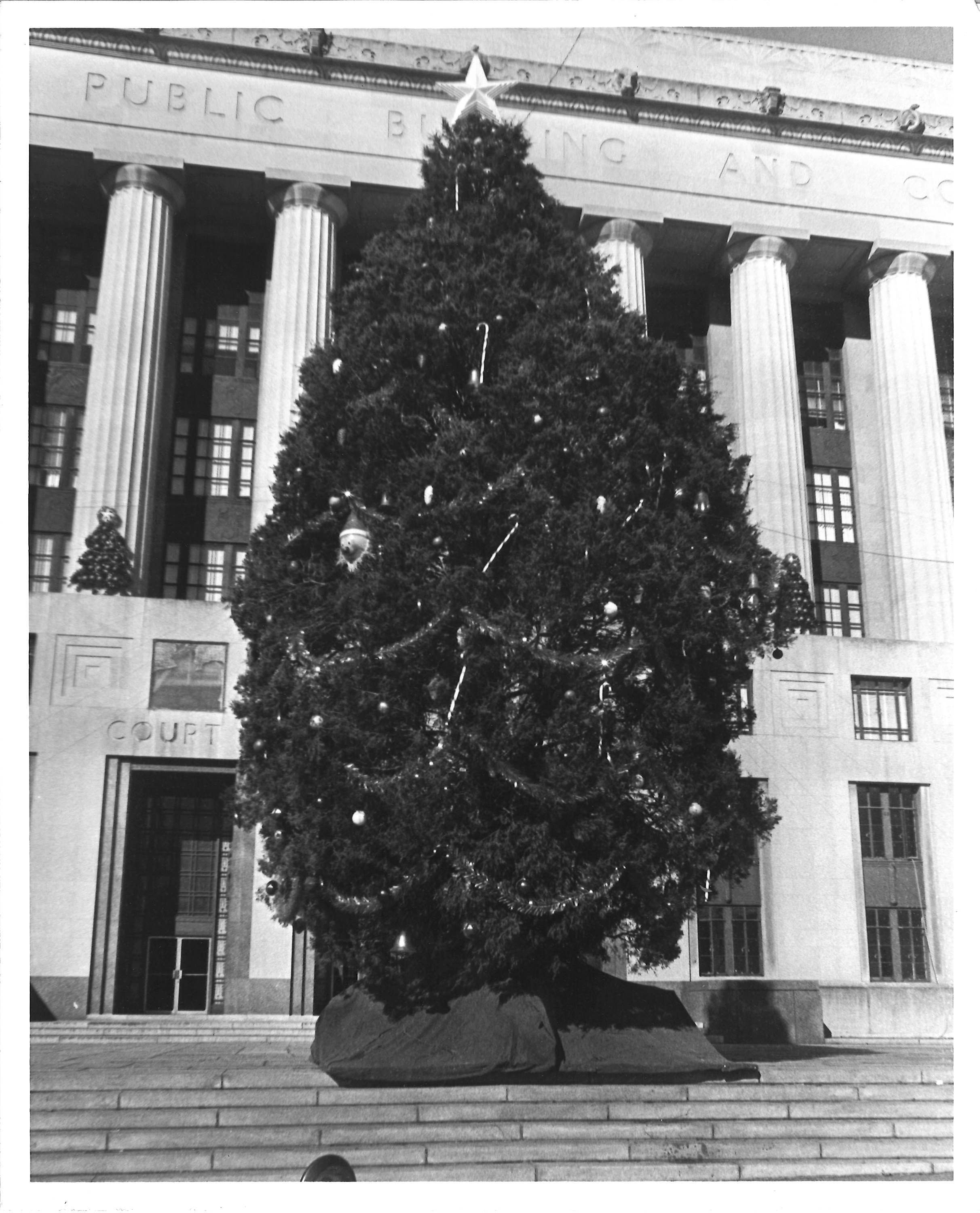