Savor Summer: Food of the Fandoms

Food: the final frontier. These are the recipes of the Star Trek Franchise. Its continuing mission: to explore strange new dishes, to seek out new delicacies in new civilizations, to boldly go where no diet has gone before.

The Star Trek Cookbook is a culinary journey through the Star Trek universe including Original Series, The Next Generation (TNG), Voyager, and Deep Space Nine (DS9). Featured are Earth-friendly recipes of character favorites, recipes from the actors themselves, and even food prop recipes from TNG and Voyager property master Alan Sims. As a self-identified Trekkie, I just had to try a couple.

Because I consider DS9 the best of the franchise, I chose the Bajoran Ratamba Stew over spinach linguine as my entree – just the way Captain Sisko prepares it…well, almost. The grocery store didn’t have spinach linguine so I substituted whole wheat linguine. The dish turned out super tasty. 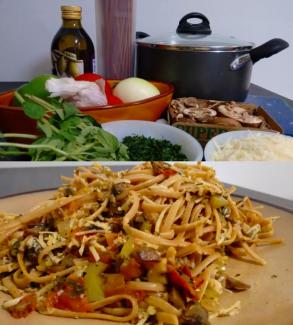 Even though I consider DS9 the best of the franchise, I am hardcore nostalgic for TNG. It was my first exposure to the Star Trek universe and Worf’s Blood Wine feels like the perfect tribute. The recipe is non-alcoholic, but I modified mine and used a berry-infused sparkling wine in lieu of juice to make it more adult-interesting. My favorite part of the recipe is the frozen fruit stuck through the blender to give it the effect of containing “floating red corpuscles.”

Lastly, I paired my blood wine with the obvious choice – blood pie! Blood Pie a la Neelix is a dish created for one of my favorite characters – Voyager’s B’Lanna Torres. Sure, the recipe is basically cherry pie, but if it works for B’Lanna and Dale Cooper (sorry, mixing my fandoms), it works for me! I did however opt for mini blood pie tarts instead of a typical pie because it’s funny to render Klingon food dainty. 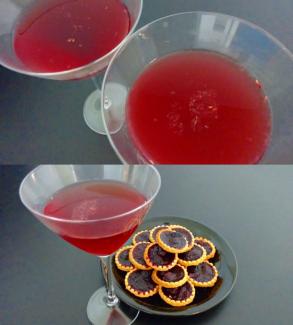 Don’t exclude your pets from the fun! Try the recipe for “Data’s Cat Food #219, Subroutine |DataSpot\Nancy|.”