The Tragical Comedy, or Comical Tragedy, of Punch and Judy

We've all seen some of the amazing puppet shows that Wishing Chair Productions has put on, and therefore, we've seen the diverse collection of puppets that they have. But there is one set of puppets that is no longer performed with but still represents the uniqueness of their collection - a very old set of Punch & Judy puppets. In honor of the Nashville International Puppet Festival coming up in June, this set of archaic dolls will be on display in Non-Fiction for your viewing pleasure.

"As children, we all live in a world of imagination, of fantasy, and for some of us that world of make-believe continues into adulthood." ~ Jim Henson 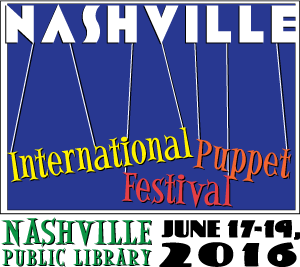 Let me just preface this month's blog post with this - NPL's puppet staff (a.k.a. Wishing Chair Productions) are some of the coolest people that work here at the Library! AND, based on recent experience, I'd dare say they may have the most fun working here. Keep this in mind when you are ONLY CONSIDERING coming to the Library next month for the Nashville International Puppet Festival. You'll want to come without a doubt! It takes place June 17-19 and will include a variety of performances from 14 different puppet troupes, coming from 6 different countries (as well as from yours truly, our very own puppet crew).

In honor of this momentous occasion, there will be a special exhibit of puppets in a couple of places around the Main Library, coming next month. Actually, one of the exhibits is already set and ready for your viewing pleasure - visit the 2nd Floor Courtyard Gallery to see several of the masterpieces created by the Library's original puppeteer, Tom Tichenor. On the 3rd floor in the Non-Fiction department, there will also be a special display of older puppets that were given to the Library in 2008. To the puppet-enthusiasts reading this blog, do the names Punch & Judy sound familiar to you?

That's right, among their impressive collection, Wishing Chair Productions also owns an old set of Punch & Judy puppets. When I say old, I don't mean in our lifetime old. I mean over 100 years old. Though I haven't been able to locate a specific date for when the puppets were made, I have found some evidence to argue that they are the oldest set of Punch & Judy puppets in the United States. So "handle with care" goes without saying when playing with this particular set of puppets.

Before elaborating on the history of this specific set of dolls, I think a brief explanation of who Punch & Judy are is in order. Though the show is famously known as an old English puppet show, a little research revealed that Punch's roots can be traced further back to the Italian "Commedia del Arte" show, and possibly even further back to the ancient Roman theaters. Dear Ole' Judy was not added to the family until Punch reached England; prior to his legacy there, research has shown that Punch has several different possibilites for lineage. 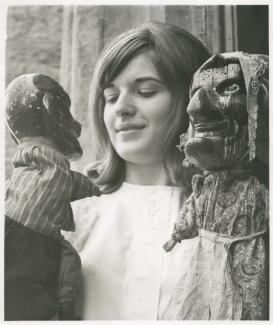 From the masked mimes of Rome, it is thought that he is a descendant of Maccus who was one of the Atellan players (a company of actors from Atella that performed their comic plays on high wooden trestles). Possibly another descendant is Pulcinella, a Neopolitan clown created by Silvio Fiorillo around 1600. And lastly, Punch's inspiration may have been from a village hunchback from Acerra (near Naples) known as Puccio d'Aniello. The story goes with Puccio d'Aniello that a company of players came to Acerra where he was one of the grape gatherers. While they were celebrating the grape harvest amongst the country folk, they became entertained and enthralled with his "comical appearance and rustic wit" ("Punch and Judy - A Short History with the Original Dialogue"). They were so entertained that they convinced Puccio to join their company, and he was an instant favorite. After he died, his act was continued when another actor put on a fake nose and a hump on their back. Over time, the name Puccio d'Aniello was slurred to become just "Pulcinella."

Wherever he came from, the underlining theme remains the same for his character and appearance - sly and insolent, always managing to escape trouble, a beak or hooked nose and a humped back. The show morphed from real life actors to the much-cheaper-to-produce puppet shows, and were performed in a diverse array of locations (churches, operas, and streets).

In the more modern English-telling of the play that was commonly performed in English seaside villages (dating to around 1800), Punch and Judy are married with one child and a dog named Toby. Punch is left to take care of their child while Judy is out shopping. The baby becomes upset and begins to cry, and after several attempts to soothe it, Punch becomes angry himself. He eventually throws the child out the window. When Judy returns and sees what he has done, she becomes angry and belabors Punch. Punch retaliates and kills Judy as well. The rest of the show is meant to be a comedic stream of encounters with other characters including the constable, the hangman, and the Devil himself. Punch triumphs in the end over all of them. Though this show sounds like it is meant mostly for adults, it's also performed for the entertainment of children. The comedic value helps lighten the tone of the play - a.k.a slapstick comedy. 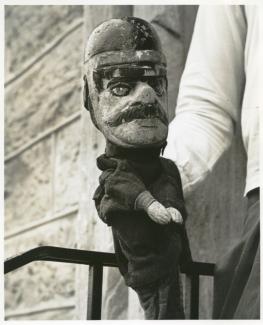 Now that you know their history and storyline, here's a little bit why these specific dolls are so unique. The collection is almost complete, only lacking the baby (and Toby too, of course). Keep in mind that the types of characters reflect the time period they were born, and that they are no longer performed with but are relics of a classic puppet show. The characters include:

They were hand-carved in England over 100 years ago, and made their trek to the United States thanks to one of the original owners, John Beaty. Beaty performed with them and after his death, they were passed down to his son, Jim, who continued the tradition. After his death, Jim's wife gave them to Bill Stiles (assumed to be a family friend or neighbor) who worked them for several years until he retired in the 1960's. This sadly may have been their last performance, because they were then given to the Children's Museum. I've included photos of a few of the Accession records for when the Museum added them to their collection in 1966. I wasn't able to find any trace of information regarding what happened to the set after the museum acquired them, but the Library now happily owns the set thanks to the Cultural Museum at the Scarritt-Bennett Center. In 2008, the artifacts were transferred to the Library. 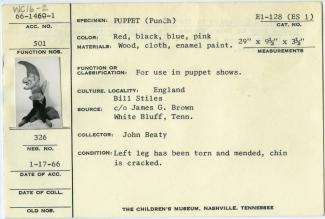 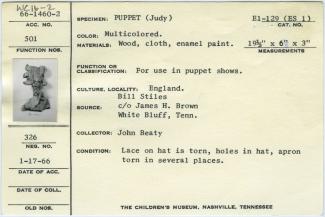 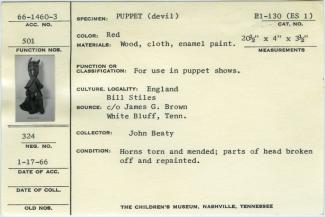 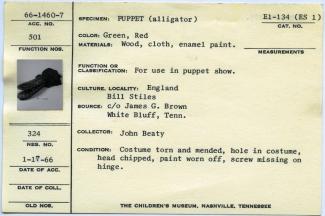 Ta-da! So now, when you come down for the ever-entertaining and magical puppet festival in June, you can take a look at these almost-ancient and unique puppets. Again, they'll be on display starting at the beginning of June in the Non-Fiction department on the 3rd floor of the Main Library (you'll see them when you step off of the elevator), and will stay there throughout the month.