History of Nashville's Chapter of the American Red Cross, Pt. 1

The Red Cross is a storied and dedicated organization that spans decades, continents, wars, and various disasters. The American Red Cross was founded in 1881 by Clara Barton. And though the Nashville Chapter received their official charter in 1917, their relief work for local troops and citizens began long before then. In honor of their dedicated service, next month, Metro Archives will be exhibiting artifacts and documents from our American Red Cross collection. This is part 1 of their history, stay tuned next month for part 2. 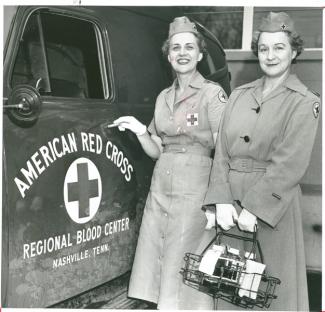 If I say the words "Red Cross" to anyone on the street, they will most likely know exactly who I am talking about and the type of organization they are. I'd imagine this might also conjure ideas in their head about both wars in the 20th century, blood donations, disaster relief, and general charity. But if I specifically said the words "the Nashville Chapter of the American Red Cross," would they know the depth of this specific chapter's efforts and dediction? Maybe, maybe not. But I'm going to try to help with that.

Here in Metro Archives, we have a rather large collection of scrapbooks, photographs, and artifacts - all from just the Nashville chapter of the ARC. Starting in July, we will be exhibiting many of these materials in Archives and in the first floor lobby of the Downtown Library, in honor of the 100+ years of service that the Nashville chapter has given. Because it's hard to narrow down the history of the chapter to one blog post, this is part 1 of their history; stay tuned next month for part 2 of the chapter's history.

Another piece of history that most people might know is that the American Red Cross organization was founded on May 21, 1881 by a woman named Clara Barton. Barton was traveling around Europe after the Civil War when she first heard of the Swiss-inspired organization and thought how beneficial it would be if the United States had their own version of the organization.

It took some time after the founding of the base organization in D.C. before Nashville had their own charter and chapter (1917), but the women that eventually made up the first organization began their work long before there was a charter. And after they received a charter, their work and efforts landed them with the reputation of being the key city in the South.

The Nashville chapter was formed as an amalgamation of other smaller organizations and auxiliaries, including one of the first-founded organizations - the Army Comfort Circle (founded in 1898). The first president and secretary of the Army Comfort Circle are the very same women that helped establish the Tennessee Red Cross Association. These women were Mrs. Henry F. Beaumont (first president) and Miss Cora Hager (first secretary). See their photos below in the photo slideshow.

As some of their major work, the Army Comfort Circle provided services to the Tennessee men stationed in the Philippines (unrest against American rule occurred in the Philippines in 1899, and many Tennessee men were among the last forces that remained until peace returned in 1901). These ladies were also recognized nationally for the hard work and dedication they provided to the Fourth TN Regiment in Knoxville and to the Convalescent Home in Oakland.

At the beginnning of the new year in the new century is when the Tennessee Red Cross association was organized and founded; and as I mentioned, Mrs. Beaumont and Miss Hager were among the ringleaders. These women worked diligently to help all in need, not just local citizens or troops in need. And most of the time - it was with their own money.

Before the Tennessee assocation was provided a charter, there was a step in between. In January of 1901, the association became Tennessee Red Cross Auxiliary #9. Their services only increased as much as funds allowed and for as much as they were able to receive through donations. It was also around this time that the National Red Cross Organization decided to add new services to their agenda - nursing, first aid, and water safety. Nashville was on the list of cities to receive these services as well.

Skipping ahead a little to the first World War because for one, I'm sure I'm making you all fall asleep...and 2, this is when things start to get good. In the way that wars tend to go, the Great War was a desperate and heartbreaking time all-around. The Red Cross organization was needed more than ever. To help increase their already successful efforts, Nashville finally received an official charter in May of 1917. And you might've noticed that I have only mentioned women thus far as leaders, followers, and workers of the Red Cross...that's because women were the guiding light up until this point. Now as an official chapter, their leader was John Henry Smith.

Their first assignment from headquarters - raise $150,000 for the national fundraising drive. They surpassed that by $33,000 making their ending number $183,000. Go Nashville!

After the war and with the return of servicemen to their home, the Red Cross was now faced with a few new areas of service - lots of paper work. Paper work for benefit claims, budget counseling, and general assistance to the men that were adjusting to civilian life again. As always and as is still today, the Red Cross assisted to the best of their ability.

Prior to the second world war, the 1930's began somewhat slowly for the organization - focusing predominately on conducting training classes for first aid as a part of Governor Horton's "Save-a-Life" campaign. But soon, their work was desperately needed during what was known as the "100 days of horror." The area experienced a debilitating drought with only one downpour of rain during May to provide respite. Nashville and the Red Cross stood out again in support though with the founding of the Disaster Preparedness and Relief Committee - a first of its kind in the country.

While the Red Cross took over many cases that the Davidson County Charities Commission could not handle, the Disaster and Relief Committee was tasked with the responsibility of devising a plan to distribute food, milk, and cow feed to those in need. Success you might say, thanks to the many efforts of Nashvillians including the 40-foot refrigerator car filled with vegetables that was delivered to the warehouse where all supplies were distributed. However, the timing of this drought was also remarkably inconvenient and even contributed to the ever-growing financial depression. Despite the Red Cross' best efforts, including the donations from various committees and citizens, by August of 1932, the Nashville Chapter was financially depleted.

And on that sad cliffhanger, I'm going to say return next month for Part 2 where I cover how the Red Cross bounced back, its thriving work throughout World War II, and the many other great achievements they've made since then.

Also, be sure to come visit the Downtown Library starting in July for the exhibit: "I Serve - History of the Nashville Chapter of the American Red Cross." Though the majority of the exhibit will be on display in Metro Archives on the 3rd floor, you'll also be able to view samplings of the collection in the Lobby of the Library.