In celebration of World Down Syndrome Day 2018, here's a story about how books can help make sour lemons into sweet lemonade (so to speak). 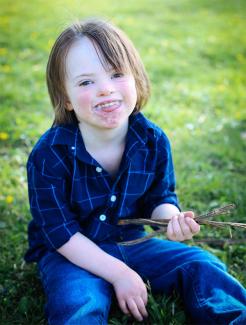 Uriah’s most common facial expression is a smile. No book required.

Our oldest son, Uriah, recently achieved one of the biggest accomplishments of his life, to date. He learned to pee in a potty.

A bit late for potty training, you might think, and you’re entitled to your thoughts. After all, the average child is potty trained between the ages of two and three.

Uriah has been and will always be, on his own track to achievement. And all achievements will be met while sporting an extra chromosome. In other words, Uriah has Down syndrome, which sometimes has an impact on his timeline for success. 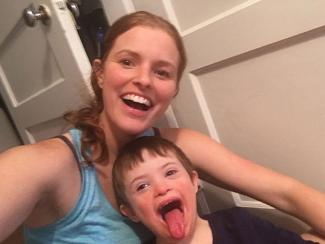 One of our only potty training selfies. Proof Uriah was as joyful as I describe.

One the most important things I’ve learned in watching Uriah grow is not to focus on what the world would view as lemons, but on his ability to produce lemonade (not a metaphor for pee, I promise). I’m not going to elaborate on the number of hours we spent in or near the bathroom that initial weekend we started training him. It would most likely make you gasp or cry. For me, it was the latter. I was so sick of being stuck in our bathroom, I started to develop a phobia. I can’t remember another time when I felt so confined!

This initial potty training effort was by far the most intense, long-term, all-consuming process I’ve ever embarked on as a mother, and for good reason. I was helping my son consciously abandon a behavior pattern he had always known, and embrace a new one…in one weekend.

It was easy—very easy—for me to focus on those negative, sour-lemony thoughts, which seemed to multiply by the hour. I kicked myself about all the time we had spent on the changing table, going to buy diapers, etc. I was falling further down the rabbit hole and was about to drown in lemons.

Our training protocol was that after so many minutes, if Uriah was successful, he got a quick reward (generally a small piece of chocolate, or that he could watch a 2-minute video on my phone). As his interval time in between potty-perches grew, another challenge surfaced. How do you keep a five-year-old entertained and engaged within a two foot radius of a toilet?

And in this circumstance, Uriah decided to make lemonade out of my lemons. His joy for reading trumped any discouragement from being stuck in the confines of a bathroom. In fact, he wasn’t discouraged at all. He was happy to have my undivided attention while sitting his bare bottom in my lap to hear yet another book…or sing another favorite nursery rhyme or song. 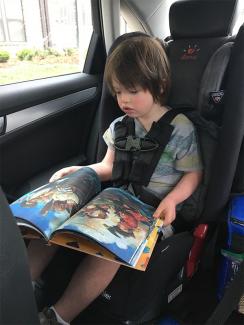 Just one example of Uriah enjoying a book on-the-go.

This is where all those months of changing his diaper did matter, but in the most positive, lemonade kind of way. Oftentimes, during a diaper change, we would sing Uriah a nursery rhyme or song. This was one way of exposing him to language…because we knew he may need to hear more words than the average child before learning to read.

All those trips to Target to buy wipes and diapers only developed his love for stories. In check-out lanes we would often grab a book and read it quickly, or discuss what book we’d read when we get home. Add in all the other times we would read at the park…during lunch…waiting for the doctor….waiting for a therapy session… in the bathtub….or waiting for dinner to finish cooking…all of it added up, and that’s the point. 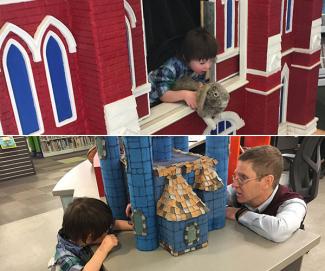 The Ryman Puppet Theatre at the NPL's Main Library is one of Uriah’s favorite spots to tell a story. And getting a hand stamp from our friend Mr. Patrick is an important part of our visit to the library.

Books are a great way to make lemonade.

This post was written in celebration of World Down Syndrome Day, which happens on March 21st each year.

Titles from Training & Some of Uriah's Favorites