A Celebration of the Heart and Soul: The Summer Lights Festival

In celebration of the Library's Summer Challenge theme of "Being a Reading Rockstar," this month's Nashville history post takes a look back at the arts' festival that used to entertain the streets of Nashville long before Lightning 100's "Live on the Green" was around...

A few of you reading this post might remember when Metro Arts hosted the Summer Lights Festival in downtown Nashville, from Legislative Plaza up to Public Square Park via Deaderick Street. A few of you might've even attended it, during its 16...maybe 17-year run. During a time when Nashville's Downtown wasn't quite the lively place to be that it is now, this festival usually took place at the end of May or the first weekend in June, and provided a variety of options of entertainment for the whole family - music, visual arts, dancing, food - you name it.

Though I lived here then, sadly I don't remember it, but I think that's more my fault than the festival's PR, because from what I've processed so far - advertisement was not their problem. I've been processing the Summer Lights' Collection for a time now, trying to get an idea of what it was, what it included, and why it eventually failed. And though I don't want to highlight too much of its failures, here's what I can tell you about the arts' festival that pre-dated Bonnaroo and Live on the Green by a few years... 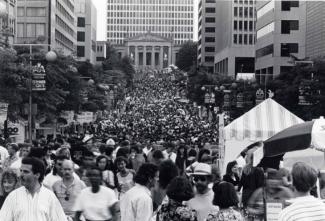 The Festival started in 1981 (1982 is also listed as the starting year in some of the paperwork), and as far as I can tell, 1997 was the last year. It started as a means to rediscover the downtown area for Nashvillians, and also as a forum for the arts.

On Legislative Plaza and surrounding streets (primarily on Deaderick for several of them, especially the one included in the photo above from 1992).

A direct quote from a 1986 press release about the festival describes it as the following...

"Summer Lights Festival on the first weekend in June is a celebration of the heart and soul of a great—and growing great—city. It is an arts and entertainment festival of excellence, as comfortable presenting Bach as buck-dancing. Summer Lights is bluegrass, the blues, and the Blue Danube. It’s break-dancing and ballet, t-shirts and sculpture. It’s croissants and Coke, country music, and classical symphonies. Poetry, painting, plays and pops. It’s a showcase of the incredible diversity of artistic expression in residence in Nashville."

On the 1987 advertisement for the festival, it states that there were 5 stages spread throughout several blocks - featuring musical performances, dancers, theatre, poetry readings, storytelling, opera and jazz; they covered all their bases in terms of providing a variety of artistic options, that's for sure. If you're curious who the musical performers were, check out the 11-year review (1982-1993) of festival performers in the slideshow below. But you can also see a few of the most recognizable names from that list here...

Check out some pictures from the festival in this slideshow...

As you can see in some of the photos, the festival also boasted many other activities including eating food (my favorite) supplied by local restaurants, the sale of specially-designed Summer Lights' merchandise, and visual arts via commissioned works for the festival from the Summer Lights Invitational Exhibit and the Mayor's Art Auction. Evidently during the festival, the whole city turned into an exhibition for visual arts - public buildings and city art galleries held special exhibits in conjunction with the festival.

One example of a theatre production that was commissioned for the 1987 Summer Lights Festival was a show created based on music recorded by Brenda Lee, such as "I'm sorry," "Sweet Nothings," and "Saved."

And the food I mentioned, well before anything was sold, there was a "Chef's Taste-Off" competition that took place at "Nashville's new Convention Center" (a.k.a. our former Convention Center that was attached to the Renaissance Hotel) that tasters voted on after sampling all options. The advertisement for the 1987 "Taste-Off" states:

"If the Taste-Off doesn't satisfy you, then head to the festival for the widest selection of foods and drinks available in one setting. Talk about crossover! Within a few steps, you can have sushi, tacos, shrimp gumbo or pasta. And who could resist the desserts?"

I don't recommend eating all of the above in one setting though.

Anything you can do, I can do better

Also apart of that 1986 press release about the festival, the goal of the festival is "to out-Spoleto Charleston’s famed Spoleto Festival, but to do so in Nashville style – that is, by presenting excellence in all the arts admission-free in a zippy atmosphere in Downtown Nashville, which is everyone’s shopping center." If you're familiar with this competing festival, here's what the press release is referring to - according to the event's website, the Spoleto Festival in Charleston began in 1977 by pulitzer-prize winning composer, Gian Carlo Menotti, Christopher Keene, and a few others that were interested in creating a similar festival to the "Festival of Two Worlds" that took place in Spoleto, Italy.

The main difference with Charleston's festival and Nashville's is that the Spoleto Festival is still going, and is usually a 17-day spring festival. Another difference between the festivals is that Charleston was chosen because it best met the requirement that the founders were looking for - "a city that would provide the charm of Spoleto as well as its wealth of theaters, churches and other performances spaces."

The Rise and Fall

The idea for the festival came from (besides other festivals around the country) a previous event that was hosted at Cheekwood called "A Summer Fling," but once it was decided that Cheekwood no longer wanted to host that festival, something bigger and grander was planned. Metro Nashville Arts Commission was thrown into the mix, and taa-daa...Summer Lights was born. Along with the Arts Commission, the Tennessee State Museum and Tennessee Performing Arts Center were also co-sponsors. And again, as mentioned above, the idea seemed fitting by Mayor Fulton to not only help support the arts, but to also create an event that would help restore life to the dying social life of Downtown Nashville.

When the festival began, admission was free. But due to what I'm assuming were financial constraints, they were eventually forced to charge an admission fee (I'm not sure what that cost was). There was no fee initially because for several years that it was running, it was supported by the Summer Lights Foundation (which eventually became the Greater Nashville Arts Foundation), and various sponsors such as American Airlines, Nissan, Coca-Cola Company, etc (the sponsors continued, but the cost increased as well). But evidently from the get-go, the Festival didn't produce the desired response nor proper amount of revenue that should be expected of an arts' festival, well at least what founders hoped for this festival.

I said I didn't want to harp too much on the negative that I've managed to discover in processing this collection (the negative being the on-going issues the festival had throughout its tenure). I will say though, and part of this is based on a news clipping I recently read about the Festival from the Nashville Scene, that despite its apparent issues - the Festival helped create other music events in Downtown Nashville (such as Dancin'-in-the-District), and flourish the downtown night life. So for that, you can give it props.

If you're interested in finding out more about this festival, I'll be talking about it in our next "Back in the Day" podcast with Metro Archivist, Ken Fieth. So stay tuned for that! 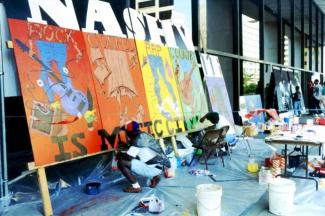