Across the Muddy Chasm

Anyone that's ever walked down Charlotte Ave, right next to the Capitol, is familar with the statues surrounding its borders (or maybe you're not, that's possible too). But if you are, Sam Davis is on the southwest corner and Sgt. Alvin C. York is on the southeast. But are you familiar with who's standing in the middle, somewhat leering over all who walk beneath him? Or better yet, why he's there?

Many Nashville-history enthusiasts are familiar with the name "Senator Edward Ward Carmack"—probably a few tourists as well who were told the story when on a tour. And soon, all of you will learn what makes Carmack so special to earn a permanent spot on the Capitol's grounds. I'm going to try to make this as dramatic as I can because it's that kind of story. And also, because it's the month of October, and that means a little extra drama is allowed. So we'll start with the fact that the month was November and the year was 1908, almost 110 years ago...

Picture a time without tv, internet, social media, etc. as the main forms of communication. Newspapers were the primary rulers of the word, where writers such as Carmack expressed his opinions, often vehemently. Keep that in mind as you read on.

Also playing a strong role in the intrigue is the often-controversial substance of alcohol. Yes, this was before the 18th Amendment came about, but not before the heated debate about the substance's problematic effects. According to Brian Allison's Murder & Mayhem in Nashville book, alcoholism destroyed many homes and careers, as well as led to a reform movement that fought against what was perceived as "the greatest social evil known to man." The debate had been raging for 30 years, and was coming to a head by the early part of the 20th century. 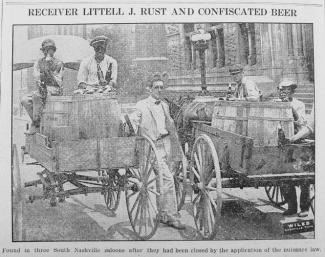 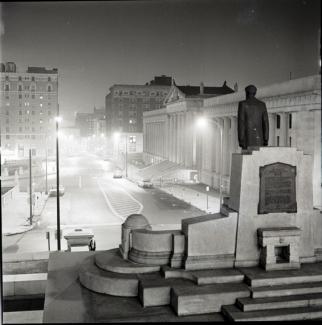 Before he enters fully though, here are a few quick facts about the former State Rep and U.S. Senator...

His character: According to Allison, he was a sharp-tongued, eloquent, passionate speaker. Undoubtedly opinionated, and could appear self-righteous and obnoxious at times. His was one of the loudest voices against alcohol and gambling interests, and he endorsed white supremacy. 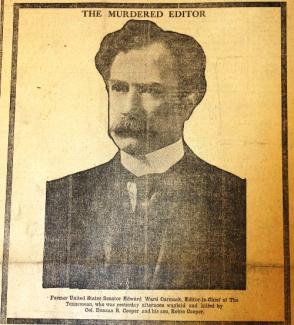 Carmack appeared to have moved around a bit as a journalist, as you can tell with the list of his jobs above. Early in his career when he worked as an editor for the Nashville American (1888), he was hired by the man that would later seal his fate - Duncan Brown Cooper. More on him later.

Also with his various job changes sometimes came his change of political opinion. From the various sources I've read, apparently he began his journalism career by ridiculing the prohibitionist movement. But took his more drastic approach when he ran for governor against the son of a former foe and rival, Josiah Patterson (Malcolm Patterson was the son and opponent to Carmack). In order to set himself apart from the fellow Democrat, he decided to completely oppose booze.

His opinions towards white supremacy never changed though, and was even noted to have publicly called for the hanging of early Civil Rights' activist and journalist, Ida B. Wells.

Wells was a journalist with the radical newspaper, the Memphis Free Speech. In response to the "Curve Riot" that took place in 1892, something that wasn't really a riot but actually an attack on the "People's Grocery Store" by undercover police serving an arrest warrant. The owner of the white competitor store to the "People's Grocery" convinced a court that the store was a nuisance. When supporters of the store heard of the impending arrest of the store's owners, they feared an attack and armed themselves to defend the store. Several whites then armed themselves and joined the melee, which ended with over 30 African Americans arrested, including the owners. Unfortunately for the store owners, it didn't end there; a mob seized them from the jail and lynched them. Wells wrote about the tragedy in the Free Speech, advising her readers to move away from the city. She heeded her advice and moved away from the south, thankfully before the Free Speech's office was demolished after Carmack publicly called for retaliation against her.

It almost goes without saying that his inflammatory and outlandish opinions helped him create followers easily, and definitely enemies. In 1907 when he ran for another term in the U.S. Senate, quite a bit of name-calling broke out between him and the other candidate, former governor Bob Taylor. Carmack lost to Taylor in the end, and moved on to political positions closer to home - the Governor of Tennessee.

Of course I already mentioned this above, but I didn't mention that he lost, again. Patterson won the primary by over 6,400 popular votes and was re-elected. But the campaign for both candidates was a vicious fight, and it primarily broke out among the editorial pages of Nashville's newspapers.

Carmack did his mudslinging in the Tennessean while the Nashville Banner backed Patterson. With the loss, Carmack went back to being a journalist - working as the Editor-in-Chief of the Tennessean. And did he ever use his position to his advantage.

Carmack was even more bitter after the gubernatorial loss, and began aiming his editorials at anyone he deemed an enemy; this included his former boss and mentor, Cooper. Carmack really didn't have any reason to be attacking Cooper, calling him a "corrupt political puppet," since he was not a public figure, nor was he running for office, but that didn't stop him. It was just that Cooper worked on Patterson's campaign. 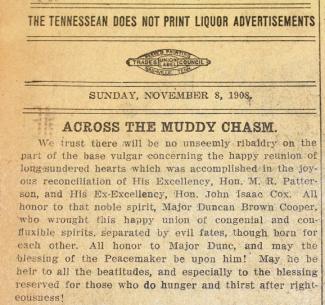 A couple of the insults that Carmack threw Cooper's way were thought to be low blows; comparing him to Sol Cohn and Max Hartman, the "notoriously disreputable" saloon owners. Cooper didn't take these insults lightly and was in fact hurt that a former friend would target him in this way. And with the feud between the two so out in the open, even the governor contacted Cooper's son, Robin, to warn him about his father. Robin did indeed take the governor's advice, and borrowed his uncle's pistol to keep on him just in case.

The tipping point came on the morning of November 8th, 1908, when the Tennessean published an editorial by Carmack called "Across the Muddy Chasm." In it, Carmack lets loose even more on Cooper, in rare eloquence. Actually I read through it and I suppose it's an insult somehow on Cooper and the governor, but the insults went right over my head. See a snippet of the editorial above.

Either way, this made Cooper even more angry with Carmack. He even stated that if Carmack were to publish his name again, "he or Senator Carmack must die." Neither man's pride would allow them to back down when these more serious threats were dished out, and true to form, Carmack again published another editorial the next morning. Again, Cooper became enraged and stormed into his son's office, declaring that he would find Carmack and settle the matter. You can imagine Robin Cooper's fear for his father, knowing his father always carried a pistol but would most likely not win in a shoot out thanks to his rheumatic right hand. So Cooper stayed by his father's side. 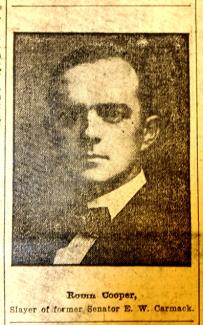 When both Coopers set out to meet Governor Patterson that afternoon at the executive mansion, they took a different route to try to avoid Carmack's usual routine. They walked through the Arcade and up Union to 7th Ave. Despite their best efforts, their path didn't quite steer them away from Carmack. Carmack lived in the Polk Flats apartment building on 7th and Union (see photo below), and just so happened to be standing outside the building, talking to his neighbor at the same time the 2 men walked by. The younger Cooper tried to distract his father so he wouldn't see Carmack, but no dice. The elder Cooper headed straight for Carmack, ready for a confrontation.

*Queue suspensful music here*...the elder Cooper yelled at Carmack, who proceeded to turn around in somewhat surprise (probably) while also fumbling to pull his own pistol from his pocket. Bystanders scrambled out of the way as gunfire erupted between all 3 men, ending with Carmack on the ground with 4 bullets in him (in his left arm, chest, and base of his skull). Robin Cooper had also been shot but only in the shoulder, just beneath the collarbone. The elder Cooper stood unharmed and still with all of the bullets in his pistol, as he had not fired once; his son had done all of the firing. Carmack had died before he even reached the hospital. 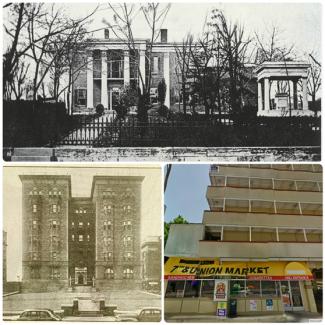 And was the fatal showdown a wild sensation spread throughout the newspapers and used for a political advantage? You bet. Both sides spun the incident to their own advantage. To the supporters of prohibition, Carmack was obviously a victim of assassins that supported the saloon's side. And for those against prohibition, well Carmack simply got what he deserved.

Naturally, the trial was just as big of an ordeal as the incident itself. The actions of both sides were examined, and in the end, the jury found both Coopers guilty. And after that, the appeals made it all the way to the Supreme Court, which turned out to be successful. In 1910, the court reversed Cooper's conviction, citing improper procedure, but the elder Cooper wasn't so lucky. The court still maintained that he was the instigating party, and that he was guilty of causing Carmack's death.
But still, Duncan Cooper did not serve any time in prison for his crime. Governor Patterson used his executive powers to issue a full pardon to his friend, which ended up hurting Patterson's political career.

A few effects of Carmack's murder: 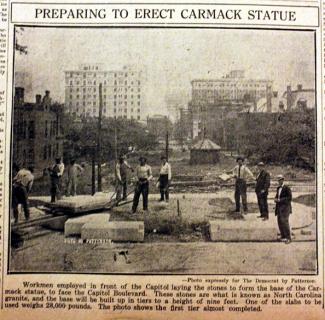 Interesting story, eh? So now you know who the man standing tall and judgmental over the Motlow Tunnel is. If you have the time, check it out the next time you're walking down Charlotte Ave. The plaque on the backside has his "Pledge to the South" address that was spoken before Congress on April 22, 1898.

If you'd like to learn more about Carmack's tragic end or any other wicked stories about Nashville, check out some of the books below.

A few other strange tidbits I've recently come across are from a book of obituaries from Tennessee newspapers we have. I was looking through this book recently for a reference question, and happened upon an area of "unknown deaths". Let me tell you, some of these are incredibly weird.

Here are a few of the highlights: