While most of us are used to getting our yearly flu vaccine to help prevent that pesky illness from infecting us, there was once a time when that vaccine didn't exist. And the consequences were catastrophic.

That annoying and deadly virus that makes its way around all of our workplaces, schools, families, and communities in general has been infecting us and rendering us useless for days at a time, for a long time. Even though the vaccine we get every year continues to evolve to cover all the strands, that doesn't always guarantee that you won't catch the virus, unfortunately. But at least we have that, because there was a time that fighting it without the proper medication made it even deadlier than it can be today.

100 years ago to be exact, during World War I, the Red Cross and other medical staff had more to battle than simply war wounds. The Spanish Influenza outbreak that infected one-third of the world's population (roughly 500 million people) is still known today as the deadliest disease outbreak in recorded history. 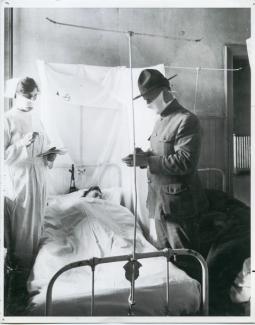 According to the CDC's website and the book, "Pale Rider" (see catalog promo below), the pandemic began sometime in 1918 (possibly late 1917) and was ending around March, 1920. In that time frame, the average life expectancy fell by 12 years and at least 10% of those infected died from the virus. The average age span that the virus was most fatal to was between 20 and 40 years old, unusual considering the flu is commonly more lethal to the very old and very young. And to put the devastation into better perspective, Laura Spinney writes in her book...

"In terms of single events causing major loss of life, it surpassed the First World War (17 million dead), the Second World War (60 million dead) and possibly both put together. It was the greatest tidal wave of death since the Black Death, perhaps in the whole of human history."

The war only added fuel to the fire in terms of keeping the virus moving. But how did it spread from Europe, where it started, to the States, and onto cities like Nashville?

According to the CDC website, the illness first came to the U.S. in the spring of 1918, in military camps and some cities. More specifically, the illness is believed to have entered the country through sailors disembarking at the port of Boston. It spread from there along the east coast and to other military training camps, and also to larger, more densely-populated areas.

But to keep morale up among the military and citizens, and also not to cause a panic, the severity of the disease was kept quiet at first. There were 3 waves of the illness, in which the second wave that occurred mostly from September to November, 1918, appeared to be the deadliest with more than 100,000 American fatalities in the month of October alone.

Though I'm unsure when the name "Spanish Flu" was officially applied to the pandemic, I found several possible explanations as to why the illness was named that. First, it was possibly a purposeful misnomer since no evidence existed that the disease made it to Spain, or that it was any worse there than other cities. A second possible reason is historically related; apparently the first Influenza epidemic that occurred in the Americas came from Spain, in 1647. And lastly, the name possibly came from the fact that Spain remained neutral during the war, and freely reported news of the illness, unlike other infected areas that did not want to cause a panic.

The Virus in Nashville

But how and when did the pandemic affect Nashville? That appears to be sometime in September, 1918 - around the time that most deaths occurred due to the illness.

I actually had a difficult time finding a lot of information about the virus' impact on Nashville or even the state, and I'm guessing that's partly due to the fact that the Spanish Flu isn't as commonly written about in terms of mass casualties as wars and horrific events are, however the amount of lives it took is quite significant. Like most other cities at the time the virus spread, Nashville reacted much the same in that it was not a requirement to report the cases. And even when they did, it was often referred to as "Grip" or "Grippe" instead of Influenza. 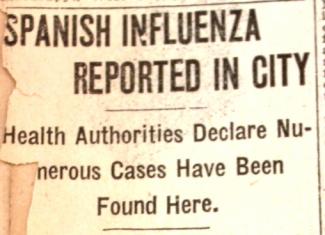 The Powder Plant in Old Hickory seemed to have received the brunt of the impact of the illness since there were so many people closely working together at the factory (over 7,500 people). However, the Powder Plant denied the existence of the illness at the plant when it first hit. They first claimed to only have several cases of the common cold and "Grippe", and stated that when the outbreak first came to the U.S., they took every precaution to prevent it from coming to the plant. To quote them...

"We are prepared to give 'Mr. Flu' a hot reception in the event he endeavors to invade Old Hickory."

But obviously this wasn't the case. One news report from September 30th stated that of the 50 cases at the City Hospital, two-thirds were employees from the plant. 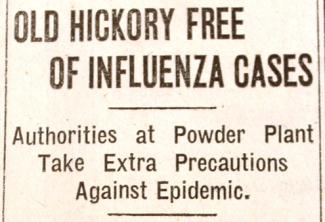 Because it was an airborne illness, and at the rate of the epidemic infecting every 1 of 4 citizens, public gatherings in Old Hickory such as religious services and civic events had to be canceled. The city of Nashville also had to do the same in order to help prevent further spread of the illness. The option of quarantining the city or even the plant was asked, but due to the size of both areas, this wasn't possible.

Since the main hospitals in town, such as the City Hospital, were quickly filled with infected patients, temporary hospitals were set up to care for the patients. Even the Tuberculosis Hospital had to take on several patients infected with the virus due to lack of room in the other hospitals (see a few pages from the report below). The first case that came to the attention of the City Hospital authorities was of a man that was traveling from Illinois to work at the Powder Plant.

From the September 30th (1918) news clipping about the closing of the Y.M.C.A. at Old Hickory, a doctor from the City Hospital reported that 75 cases of the epidemic had been turned away within the past 4-5 days, with 30 cases interned at the hospital. Of those cases, many were severe and as of that point, there was only one fatality. Dr. Fessey at the City Hospital stated in regards to the severity of the epidemic...

"In view of the rapidity with which the epidemic has spread in other sections of the country, I expect a serious outbreak of it here in Nashville within the next five or six days."

And a report from a month later... 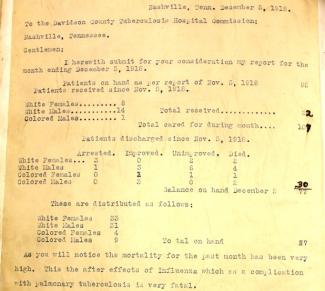 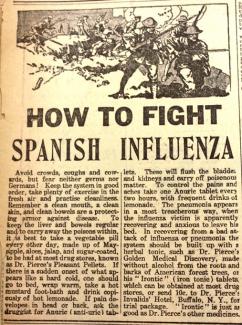 As already mentioned, vaccines or medications for the flu were not around at this time, and essentially meant that patients were advised to rest and keep themselves quarantined from others while they were ill. From all the ads I've seen in both the ​Tennessean and ​Nashville Banner​, the answer was mostly preventative care, not just treatment.

To help prevent the spread, citizens were asked to wear masks, and in some cities such as New York, coughing or sneezing in public without covering your mouth could be grounds for a fine or even jail time. In one news clipping entitled "How to Avoid Influenza," citizens are told that essentially the best thing for them to do to avoid the illness is to keep "your organs of digestion and elimination active and your system free from poisonous accumulations." This ad was among many I've seen selling pills that help with illness prevention; this one in particular was advertising "Nature's Remedy" tablets. Another example of a medication being advertised was "Menth-Alba", which sounds like it was similar to Vick's Vapor Rub in that it was a "pure, snow-white compound of well-known volatile oils that are antiseptic, soothing and healing."

Similar advice is given in the news clipping shown above to essentially keep yourself clean and in good order, and "if there is a sudden onset of what appears like a hard cold, one should go to bed, wrap warm, take a hot mustard foot-bath and drink copiously of hot lemonade."

According to the Tennessee Encyclopedia, nurses were some of the biggest heroes during this pandemic. Outside of their regular duties, trained and untrained nurses could be found driving cars and ambulances to assist physicians and public-health authorities. And of course the Red Cross was heavily involved in a variety of ways, including with the Motor Corps Department that provided supplemental assistance through transportation of troops and supplies; the government commended the Nashville chapter of the Red Cross specifically for this service.

It goes without saying that doctors, nurses, and any other medical staff had their hands tied with the pandemic, with many of them succumbing to the illness themselves.

The number of deaths in Nashville from the illness was approximately 1,300, with most occurring in Old Hickory. Apparently there were so many deaths, that the basement of the Y.M.C.A. was converted into a temporary morgue.

Chattanooga had it worse than Nashville it seems, with approximately 5,848 civilian deaths by October, 1918.

In the state, the illness claimed approximately 7,700 lives - both large and small cities included.

In the country, approximately 500,000 Americans died from the illness.

On that note, stay warm and healthy this holiday season!

Pale rider : the Spanish Flu of 1918 and how it changed the world