90 Years Ago, Nashville makes history with "The Seeing Eye"

The first school to train dogs to be service animals for the assistance of the blind opened in Nashville on January 29th, 1929, as "The Seeing Eye."

Have you ever been walking along Union Street in downtown Nashville, in front of the Hotel Indigo, and noticed the historical marker for "The Seeing Eye"? If not, stop and take a look the next time you're down there. Because 90 years ago this month, at that same spot and same building, the first dog-training school for the assistance of the blind was established in the country.

Morris Frank, a Nashville native, was the man responsible for the opening of "The Seeing Eye" school in Nashville, thanks to an article he'd read about the training of German Shephard dogs for blinded veterans of World War I. The article was published in the Saturday Evening Post on November 5th, 1927, by Dorothy Harrison Eustis, an American that was training these dogs in Switzerland (these dogs were trained for a variety of reasons, including service to police departments and the Red Cross). Frank contacted Eustis in hopes of receiving help for himself, and she agreed.

In return for her help, Frank promised to bring the idea of training dogs to be guides, bodyguards, and personal servants for individuals who are blind, back to the States.

Frank traveled to Switzerland in April of 1928 and returned home with his dog, "Buddy", just a couple of months later in June. Then, when he arrived in New York City, he demonstrated Buddy's abilities by crossing a busy street in front of many news reporters. He reported back to Dorothy Eustis with a one-word telegram stating: "Success." As the idea of training guide dogs to assist the blind was Frank's idea based on the article he read, he became the first blind man in the U.S. to be assisted by a guide dog.

The name "Buddy" for his dog (officially Buddy 1 as he had several more "Buddy" guide dogs after his first passed away) was not the first name of the dog he chose upon arrival in Switzerland, according to a 2010 article written about Frank in the Vanderbilt Magazine entitled "Through Buddy's Eyes." The dog's name was originally "Kiss." But because Frank could only imagine the reactions of people around him when he yelled "Come, Kiss!" at his dog when strolling through Nashville streets, the name was changed.

The son of John P. and Jessie Frank (his mother was also blind), Morris attended Montgomery Bell Academy and then Vanderbilt University. According to the 1931 City Directory, both Morris and his parents lived at 3809 Richland Ave; where their home used to sit is now the property of the West End Synagogue (home currently there was built years later). 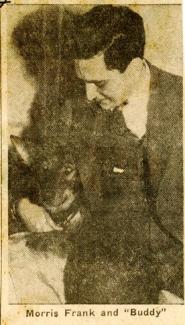 Two years before Frank's endeavor to open a training school for guide dogs (and even during his work as Managing Director of "The Seeing Eye"), Morris worked for the National Life & Accident Insurance Company.

His mother assisted him with his work for the school. She was a member of the National Board for the Prevention of Blindness, and her work was rewarded with a medal from Woodrow Wilson.

On January 29th, 1929, "The Seeing Eye" was incorporated in Nashville. The city was chosen over others, such as Washington D.C., because Frank wanted to open the school in his hometown. He also said it depended on the attitude of the city - if the city would cooperate with allowing the dogs to assist their masters into public places such as restaurants and theaters, as well as in public transportation.

According to one news clipping published about a year before the school opened (well 10 months before it opened), Frank's plan for the school was to:

"...provide for a model miniature city in which the dogs are trained, and whence they will be distributed at cost under Mr. Frank's personal supervision only to the deserving blind. The school will be an endowed charitable, nonprofit-making institution, and Mr. Frank, who is an insurance salesman with the National Life and Accident Insurance Company under Will C. Pollard, will devote two months of every year to the institution."

Similar to the dogs trained in Switzerland, the dogs trained at "The Seeing Eye" were also German Shepards. They were muzzled at all times and immunized against rabies and other potential illnesses. The location was mentioned earlier, but to be more specific, their first home was an office in the building of the old Fourth and First National Bank. It included initially only 3 staff members as well, and that included a part-time secretary. In the first year of operations, the Nashville Banner assisted in allowing them to establish its first kennel at the rear of a Church Street substation. 11 dogs were trained that year.

While Nashville was historic in their initial response to Frank's plans for the school, becoming the first city to allow guide dogs on streetcars and in public places, their response wasn't enough for "The Seeing Eye" school to continue their operations here. Frank moved the school to New Jersey in 1931, after Dorothy Eustis returned to the States and donated a 56-acre estate including buildings for the operations of the school.

With its new home, the organization was able to then house 24 clients in one of the buildings on site while they stayed for the needed 28 days to train and bond with their guide dogs. On top of that, the new location could hold 130 dogs, with a 39-member staff. By the 20th anniversary date of the school's opening (January, 1949), "The Seeing Eye" had placed roughly 1,600 dogs throughout the U.S., Puerto Rico, Canada, and Hawaii (also listed since it was not yet a state). 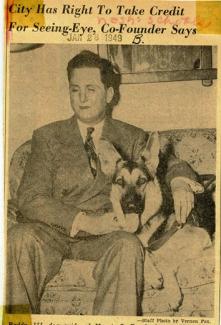 Despite the school's short time in Nashville, Frank still commented years later that the city has the right to take full credit for the success of "The Seeing Eye" since it was the first city to allow the opening of public conveyances and places, proving that "a dog could be a 'pair of eyes." Frank made this statement about the city in 1949, when he was back in town, visiting his mother and checking over applications for guide dogs.

A previous visit that Frank made to the city was in March, 1944, when he came back to town to visit Thayer General Hospital (location was on White Bridge Road where Nashville State Community College now sits). Frank was at the tail-end of his 12-month tour around the country, visiting army and navy general hospitals where he advised the doctors, nurses, and other staff on how to care for the returning blinded soldiers. "The Seeing Eye" also helped provide guide dogs to the wounded soldiers, if they were of us to them.

In all, Frank and his wife visited 45 states and 73 hospitals, with Thayer being one of the last.

"A person suddenly deprived of sight does not need pity, but to be instilled with determination to lead an active, normal life in spite of blindness. He needs to realize that he can continue to perform the normal activities of life. Encouraged to be respective of these simple but important lessons, he is then ready for the broader philosophy that with the ability to get along he can take his place along with sighted people in an everyday world."

To this day, "The Seeing Eye" is still in operation in Morristown, New Jersey, where it moved to in 1931, and is the oldest existing guide dog school in the world.

Other intriguing clips found in the Evening Tennessean from 1929...

I'm not sure what the number of vehicles registered for Davidson County is for 2018 or even 2019, all 26 days of it, but I'd imagine with over 690,000 people living in Davidson County as of 2017 (according to the U.S. Census Bureau), there are way more cars than this. 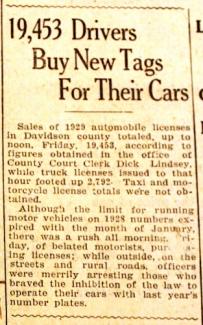 Apparently one of the biggest announcements of 1929 was the opening of a new Sears, Roebuck & Company store on Broadway (approximately where the new "Whole Foods" grocery store is going to be, I think). 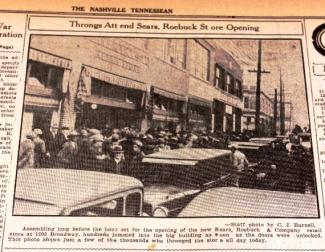 Nashville's population received a hefty boost of 15,000 people when 2 new wards were added - the Richland and Eastland areas. So if you live in either of those areas, now you know when your neighborhood was added to the city. 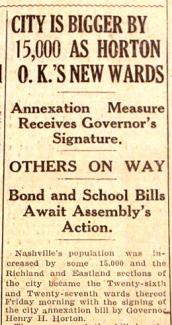 Lastly, here's the headline from the January 26, 1929, Evening Tennessean. This headline sets up the topic of my next blog post coming soon - the Liggett Murder Trial. 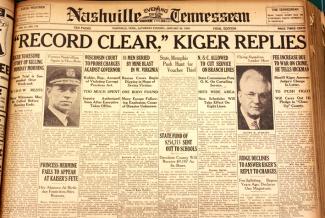 Dogs against darkness; the story of the Seeing Eye