It's the month of love (well the end of it, but close enough) and therefore that also sometimes means heartbreak, so check out this unfortunate story from Nashville's past (about 90 years ago), about a love affair gone horribly wrong.

You know, newspapers can really be the best source of information sometimes (feel free to comment "duh" below if you'd like), but that's how I happened upon this tragic story. While doing my research for last month's blog post about the opening of The Seeing Eye, I came across this murder trial that was a part of almost every front page of the Evening Tennessean from January (and February) 1929. Starting in October, 1928, when the murder took place to the final decision at the end of February, read about this love triangle gone wrong.

I'll try to keep this as brief as possible, but whom I kidding, I say that EVERY BLOG POST. So whatever, this post is as long as it needs to be. But allow me to start from the beginning on the day of the murder - October 29th, 1928. A few days before halloween...

Facts of the Case 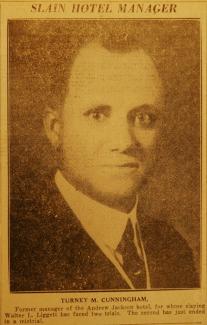 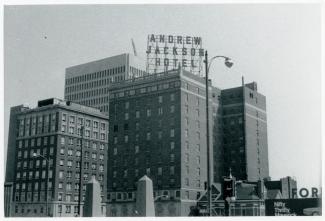 Photo of the Andrew Jackson Hotel, located on 6th Ave and Deaderick - now the home of the TPAC building. 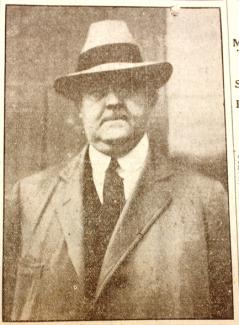 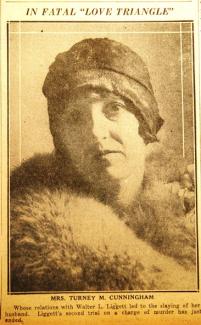 Street listing from the 1924 City Directory.

The Widow's Side of the Story

Mrs. Cunningham and the accused, Walter Liggett, engaged in an affair for at least a year prior to the murder, possibly longer. According to Mrs. Cunningham though, she wasn't the first person that Liggett had engaged in an affair with. Also, from her perspective, it didn't sound like the relationship was going all that well. In fact, she claimed in one news clipping that he'd been persecuting her in the months leading up to the murder, threatening her (with a gun sometimes) if she refused him. He drew a knife on her once as well, making her bleed.

In the wife's confession that was printed word for word in the January 23rd, 1929 Evening Tennessean, she said that the first time she ever met and spoke with Liggett was 6 years prior to her husband's murder.  She'd been waiting for a street car on Broad Street (Broadway), between 15th and 16th Aves. Liggett had been traveling in a Ford Coupe, and had stopped to see if she wanted a ride into town. She accepted, and they rode together down to Church St.

The next day after their initial meeting, Liggett apparently called her although she told him not to call. She said he continued to call her every day after that for 3 weeks, until they met up in person again. She didn't deny that they also would travel together, staying as husband and wife in hotels. Though she tried to deny the husband and wife part.

Liggett never came to her home during the day since she said that her husband told him to stay away. She also said that Liggett once made the statement to her  - "I could get someone from the Memphis underworld to knock him off." This is when she said he tried to convince her to get a divorce.

She claimed she loved him up until he began to be brutal towards her. Then she wanted to end things.

She paints him in the light of being a cruel, jealous lover that threatened her life because he thought that she was not true to him. However, there's always 2 sides to every story though, and in this case, it's the exact opposite. 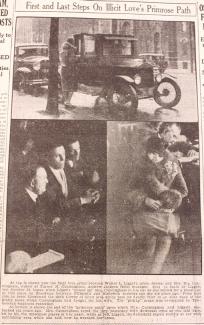 Liggett's Side of the Story

When Liggett testified during his trial, he stated that Mrs. Cunningham was in fact the more persistent party of the affair. That she wanted him to call her everyday, and that when he threatened to end the affair, she became very upset.

In fact, he contradicted one of her testimonies when she said that he was planning to take his own life. He apparently drove them out to the country, gave her a box containing several valuables ($2,500, handkerchiefs, undergarments, etc.), threatened to kill himself and told her to take his vehicle back into town. She said that he had taken his gun out during this altercation.

Liggett clarified though that he did indeed give her a box with valuables (no money in it though) and that his intention was not to kill himself but to end the affair. He gave her his vehicle and told her to return to town because he didn't want to be with her. He said he didn't take out his gun like she said, she may have seen it in his pocket though.

As far as how they met, Liggett claims that their first encounter according to her (picking her up at the corner of 16th Ave) wasn't even the first time they met; they'd apparently formally met months before then in front of the Cunningham home. The day she relives as their first encounter occurred as a result of her waving at him as he drove by. The second time he drove by, he pulled over and proceeded to drive her downtown to the Maxwell House corner (corner of 4th Ave N and Church). This is when she gave him her phone number.

On the evening of the murder, Mrs. Cunningham stated that Liggett was warned that they were being watched. He evidently then kissed her anyway, and said that he wasn't afraid of anyone in the world.

When Liggett left, she came back into her home. Moments later, she heard the gun fire and the sounds of her husband gasping. 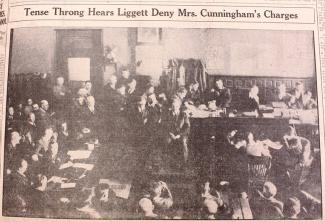 One of the big debates during the trial was which hand Liggett used to fire the pistol with. When he testified, Liggett affirmed that he had indeed carried a pistol since 1920, and always carried it where he could easily get to it with his left hand. It was assumed then that he fired with his left hand, but according to the witness, Detective Earl Kiger, he actually fired with his right. I believe the concern over which hand was used to fire plays into the argument of self-defense - who fired first?

Kiger was on scene when the shooting happened because he'd been hired by Cunningham to follow his wife. His testimony was what you could say as being crucial to the case. See a clip from his testimony below... 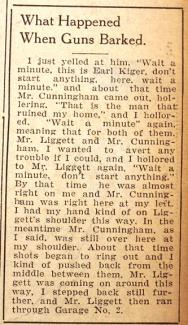 In his testimony, Kiger said that he wasn't sure if Cunningham fired at all, and if he had, who had fired first.

A Vanderbilt Hospital doctor by the name of Dr. C.M. Smith was brought to the stand to testify during the trial. He was in the hospital the night that Cunningham was brought in, and testifed that there were bullet holes found near the heart, the abdomen, and another that was an abrasion just near "where the watch pocket of his vest would have covered." There was also a bullet that struck a pen knife in his pocket, and the knife then shattered, causing a scar.

The doctor was asked which wounds were fatal, to which the doctor answered any of them could have been.

Mrs. Cunningham was questioned for about 3 days straight, something the newspapers said would be difficult to endure for any man. After one examination, she apparently collapsed and was then removed from the court room. Though I'm not sure if this was before or after her collapse, she also made a statement to the jury saying: "I haven't kept back a thing. I have given it all."

The trial was not without its own element of drama. At one point, it was delayed due to illness. Evidently one or more jurors fell ill with Influenza, delaying the proceedings.

Also, the trial attracted a large population of middle-aged women as on-lookers. One article speculates they came to hear why a woman broke her marriage vows, and also to hear the tales of a man's philanderings. I'm guessing it was somewhere near this theory. For this time period, this case was quite the eyebrow raiser. Not that these things didn't go on then, but simply because of the consequence of the affair. This is drama of the highest order, right here; a 1929 version of a Jerry Springer episode.

"Hundreds of women have walked over men to get up close to be ready to hear the story of the woman whose husband was killed by her lover."

And it wasn't only women that filled the audience seats, the trial attracted all sorts of people that packed the courtroom and more. Apparently the judge's bench was overflowing with people, and more were crowded outside in the stairways and up in the balcony.

Another aspect of the case that the newspapers liked to focus on was Liggett's lack of nervousness or emotion. "Liggett is Unmoved" is one line from a clipping, talking about his lack of reaction when the victim's clothes were presented in court. Not sure if their point was to show he was a cold-blooded killer, or that his lack of worry showed his innocence. Either way, they didn't hold back on details of his every move - including the time he gargled a glass full of water in court.

Skipping over several more news clippings of the case that pretty much just kept the anticipation of a decision pending, here's what the final verdict was: mistrial/no decision. Something like that. Apparently with all the evidence and witness testimonies, it still wasn't enough to decide whether Liggett should be punished for killing Cunningham.

The February 23rd, 1929 news story read: "Walter Liggett, Busy at Office, Feels Relieved". The following day, while the jurors and attorneys were resting up from the trial, Liggett went back to work. His reaction?...

"I don't feel like a million dollars, but I am trying to tend to my business. I felt a lot better than I have been. Though, I feel relieved."

It appears Liggett was tried again two more times, the second time also being deemed a mistrial. The third time the venue was changed and it took place in 1930. They were unable to locate Mrs. Cunningham and her daughter to testify during this trial.

Sadly, this is where my report of the case ends because I haven't been able to find much more about Liggett's fate. My guess is it probably went the same way as the first 2 trials. 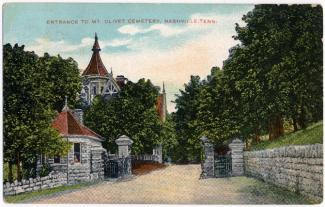 From what I've learned over several news clippings about the case, Cunningham was a well-respected man of the community. Considering how he was murdered - in defense of his wife and marriage - you can imagine his funeral was viewed with even more tragedy and sorrow. According to one clipping, he was a man that had "...risen from obscurity to a place of prominence, not only as a business man, but as a civic leader as well"

His service was at the parlors of Roesch-Johnson-Charlton, conducted by the pastor of the First Baptist Church, Dr. W.F. Powell. He was buried in Mt. Olivet Cemetery.

The Pallbearers were: "...some of Nashville's outstanding men, who had worked with him in the Chamber of Commerce, the Kiwanis Club and other Nashville organizations."

This story is definitely not the first of its kind in Nashville, and isn't even mentioned in the book recommended below. But if this has put you in the mood to learn about more of Nashville's crazier tales, the book Wicked Nashville should satisfy your curiosity. Enjoy!

Also, I'm looking for more topics to write about this year. So if you have any recommendations of any part of Nashville's history that you'd like to learn about, please let me know!