In honor of Pride Month and the 50th Anniversary of the Stonewall Riots, I looked at the papers of Larry Romans and news coverage about the Nashville LGBTQ community 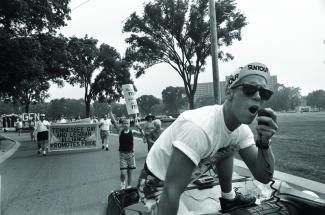 Scott McMahan leads marchers in songs and cheers during a Gay Pride Week parade at Centennial Park. About 200 people gathered for the Saturday event, which also included speeches and a concert. - Steve Lowry; June 26, 1989; The Banner

At the beginning of the month, Mayor David Briley proclaimed that the city of Nashville will now officially recognize June as Pride Month. The 31st annual Pride Festival will take place on the weekend of June 22nd. Out & About Nashville reported that last year about 35,000 people showed up for the two-day festival and over 8,000 people marched in the Equality Walk, easily making it the biggest LGBT parade in Nashville’s history. With the festive, glittery, rainbow-festooned aura of Pride month it’s easy to forget that the first true Pride event was not a celebratory parade but a riot in 1969 sparked by a police raid on the Stonewall Inn. For decades, LGBTQ Americans had been quietly organizing against the discriminatory anti-gay legal system and homophobic social climate but the Stonewall Riots of Manhattan, NY were exceptional: thousands of people were involved and the six-day event got major media coverage. After the riots, many gay rights groups formed across the country and most were inspired to adopt a more militant form of activism to demand acceptance, dignity, justice, and equal rights. 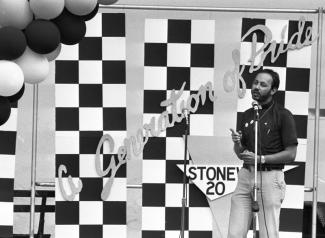 This month, I decided to honor the 50th Anniversary of the Stonewall Riots and see what we had on the history of LGBTQ life in Nashville. Given the scope of our records, it's impossible to give a full account of every LGBTQ organization and activist that sprang up in Nashville, but there are some that stick out including Larry Romans' Papers and some Nashville Banner Newspaper clippings. Most of the earliest mentions of gay Nashvillians in the Banner Clippings are limited to reporting of sex crimes and bar raids. As described in the Scene’s 2018 article about historic Nashville gay bars The Jungle and Juanita’s Place, establishments that catered to gay clientele in the 1960’s were subject to close scrutiny and patrons were frequently arrested for alleged loitering, public drunkenness, or “disorderly conduct by immoral conduct.” After a 1963 raid, the Tennessean listed the names and addresses of all 24 people arrested at the two gay bars. This practice continued when in 1986, the newspaper again outed 68 Nashvillians arrested during a Metro Parks “crackdown on gay sex.” Sam Adams, co-director of the Tennessee Gay Coalition for Human Rights, then came forward to question the methods of the plainclothes officers who orchestrated the sting and pointed out the damaging effect of public exposure caused by publishing the defendants’ personal information. Adams found that many of those arrested had to undergo counseling, relocate, lost their jobs, or received threats against themselves, their family and friends. 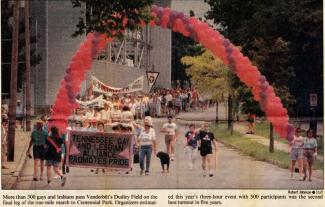 Indeed, at this time not many gay people were eager to risk exposure. It was reported that even some of those who traveled from Tennessee to DC for the Second National March on Washington for Lesbian and Gay Rights in 1987 wore hats and sunglasses as they marched for fear of being identified. Still, close to 750,000 people showed up to the march. The DC visit proved to be an empowering event and many activists from Nashville were emboldened to start their own organizations and support groups here in Tennessee. Penny Campbell, an activist and Vanderbilt Divinity School student, helped to organize the Tennessee chapter of marchers and then became the executive director of the Tennessee Gay and Lesbian Alliance which focused on voter registration, election campaign work, and repealing Tennessee’s homosexual acts laws. In fact, she was the lead plaintiff in the Tennessee Supreme Court case Campbell v. Sundquist, which overturned the law in 1996. The remaining state sodomy laws were not invalidated by the U.S. Supreme Court until 2003. Before she left the Alliance around 1991, Campbell helped open One in Teen, a support group in the Berry Hill area for gay teenagers. She continued to advocate for the LGBTQ community in her later life and was posthumously dedicated with an historical marker in her honor in 2017. 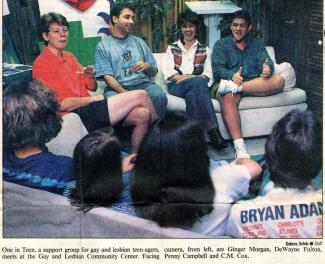 Around 1993, the Tennessee Gay and Lesbian Alliance seems to have run out of funding, and the Lesbian and Gay Coalition for Justice rose to fill the void. The Coalition, co-chaired by activist and attorney Kathleen Maloy, aimed to focus on Civil Rights, LGBTQ visibility, and discrimination. Maloy stated that she was working to fight homophobic stereotypes and “make her sexuality a non-issue.” As more people in America began living openly gay, they found that they could suffer violent retaliation or lose their jobs and housing. Today, Tennessee does prohibit discrimination in public employment on the basis of sexual orientation and gender identity but those ordinances do not apply to private employers. Additionally, only since 2001 has Tennessee charged people for hate crimes on the basis of sexual orientation and just this past February of 2019, we became the first southern US state to say that those hate crime laws also cover gender identity. 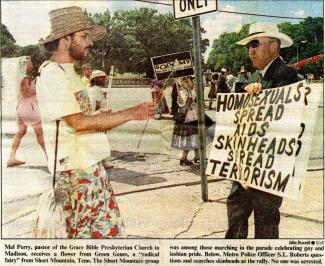 With a recent rise in visibility and representation of LGBTQ people in popular culture, it’s tempting to think that the fight for social justice is over and equality for all has been won. But LGBTQ people are still the victims of harassment and extreme violence, they are still discriminated against in the military, their jobs are still not protected, and their rights as parents and guardians are still not secure. Pride month is about celebration, but it is also an opportunity to shine a light on the ongoing fight for equality and to embolden activists and allies. Vanderbilt librarian Larry Romans was instrumental to the creation of the Lesbian and Gay Coalition for Justice and his papers, housed in Special Collections, are an excellent resource for anyone looking to organize a movement. The collection includes committee minutes, organizing principles and statements of purpose, public relations materials, budget and financial records, pamphlets, and local gay publications such as Dare, The Arena, and Xenogeny. When we study social justice groups, I think it is easy to forget that their success doesn't only hinge on the charisma and talent of one public figure; it takes a lot of work, planning, and volunteers to organize a movement. Each of us has the power to challenge bigoted ideas, actions, and legislation whenever and wherever they occur.

Love wins: The Lovers and Lawyers Who Fought the Landmark Case for Marriage Equality