Even though most of Joan Samson's novel The Auctioneer takes place during the three seasons of the year that aren't winter, it possesses a bleak and chilly atmosphere that might as well be the coldest day in January. 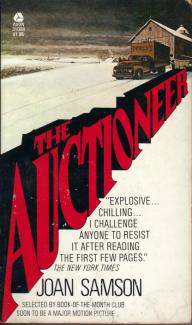 The Moores are a modest family of three working a farm that’s been in the family for years, weathering the good and the bad in rural New Hampshire. It’s the mid-70’s, times are changing, and although the community is far from idyllic, their lives are reasonably satisfactory and peaceful. That peace slowly and inexorably changes with the arrival of a stranger in town. An outsider, but a sympathetic one, Pearly Dunsmore purchases a recently vacated house and sets up shop as an auctioneer. A subtle shift in the community has appeared, and things only get darker from there.

Much of the power of Samson’s tale stems as much from its sense of realism as it does from the dual impact of tangible dread and despair. Nothing here is over-the-top, and the story maintains an allegorical feel. The dangers lurking in the rural lifestyle were popular themes in horror fiction and film during the 70’s and 80’s, and while some stories - Harvest Home, The Wicker Man - were contemporaries of The Auctioneer, much of it came afterward, according to Grady Hendrix’s introduction for this edition.

Joan Samson died from cancer in her 30’s, and was only ever able to publish this one novel. It’s fortunate that it has been rereleased, and also sad to think of the other stories she may have told, given the chance. This novel perfectly suits winter, but if you’re looking for some counterprogramming amidst the upcoming holidays, don’t wait to pick it up.