Your Voice. Your Vote. Your Power.

A hundred years after women won the right to vote, the library asks Nashville, what's next?

Votes for Women opens at the Main Library in 2020. 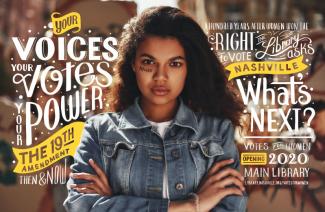 Back to the Beginning

Mary Hannah Johnson would be proud.

In 1901, she became Nashville’s first paid public librarian. The city secured $100,000 from steel-tycoon-turned-philanthropist Andrew Carnegie to build the first building for what was then known as the Carnegie Library of Nashville.

In her post, Johnson helped achieve other notable “firsts”— like introducing the Dewey Decimal classification system, building a collection of Nashville and Tennessee books, and starting a children’s story time.

Johnson was also a passionate suffragist.

In her era, a woman could run a library. She could use her brains and talent to manage money, make big decisions, and press for growth.

But she could not vote.

In fact, as late as 1920—eight years after Johnson left the library—America was still asking itself: should women have that right? Suffragists across the country were fighting to constitutionally guarantee it with this amendment:

Nineteenth Amendment crusaders needed 36 states to ratify and make it federal law. By spring 1920, they’d convinced Oklahoma, No. 33; West Virginia, No. 34; and Washington, No. 35.

They needed one more. And in August, they got it, here.

With their ratification, Tennessee lawmakers enfranchised 27 million people across the U.S. at the time.

What’s more, the historic move happened at the state capitol in downtown Nashville—a few blocks from where the modern version of Mary Hannah Johnson’s library is now.

In 2020, NPL will open Votes for Women, a permanent exhibit dedicated to the legacy of the Nineteenth Amendment. It will exist across the hall from the library’s Civil Rights Room in downtown Nashville, taking visitors through decades of suffragist history and into conversations about gender, identity, and equality today.

But why build a Nineteenth Amendment learning lab now? And why at the library?

Nearly a hundred years after women won the vote, progress has surged in some areas but still lags elsewhere.

Take, for example, Davidson County’s Metro Council. For the first time, 19 of its 41 members are women—a record high. However, more than 40% of Tennessee households that depend on a woman breadwinner live in poverty, according to the nonpartisan research group ThinkTennessee. That’s even higher than the national average, which is 34%.

Votes for Women will frame debates about issues that affect girls, women, and all humans. Visitors will be asked to reflect both broadly and personally, to get tough but be optimistic.

To succeed, this type of work must happen in a place people already trust. It requires a home where technology and techniques might change, but the work does not: Encourage the examination of ideas. Create a civic living room where everyone has a voice. Inspire readers and thinkers as people of power.

To succeed, this work must happen at Nashville’s library.

The library has been an ideas marketplace since Mary Hannah Johnson was in charge — and not just as a passive knowledge warehouse, but one that draws readers and thinkers in.

In 1905, Johnson opened NPL’s collection to local public schools. The library began sending books out on a rotating basis, receiving praise from teachers, the school superintendent, and then-mayor Hilary Howse, who called the library a “university of the people.”

Today, NPL delivers its materials to 126 Metro Schools every weekday in a resource-sharing partnership called Limitless Libraries. When the initiative turned 10 this fall, a decade’s total of 1.3 million books and materials had gone out to students, teachers, and school librarians.

Library tools for young minds have evolved since the days of poodle skirts and penny loafers: middle- and high-schoolers now imagine their own realities in science, technology, engineering, art, and math, creating them in future-focused spaces known as Studio NPL.

They write code for robots, design and package board games, use 3D printers, shoot documentaries, make their own art, and compose their own music. In fact, work coming out of Studio NPL has earned recognitions that include an honorable mention at the Teen Emmy Awards and a screening at the All American High School Film Awards.

And while the library has championed the large-scale exchange of ideas, it’s also advocated for easy access to them.

For example, in 1953, readers could get library books without actually going there, thanks to “booketerias” at three Logan Super Markets in Inglewood, Belle Meade, and on Highway 100.

Grab some produce, get a paperback. Restock on midnight snacks, return your book.

Today, more than 2 million of the library’s items go out electronically, thanks to downloadable and streaming eBooks, audiobooks, movies, songs, and television shows. From July 2018 to June 2019 alone, patrons checked out 6.85 million library items in print and online.

Ideas will dominate the Votes for Women experience, too. Visitors will be able to swipe, scroll, and tap through historic timelines, maps, and videos. They’ll learn about suffragists and other accomplished pioneers—some who are already well-known, some whose stories still deserve more careful listening.

The power of voting will also command attention at Votes for Women, bringing some serious contradictions and struggles into focus.

Consider this history: While the Nineteenth Amendment extended voting power to all women by law, systematized racism maintained injustice for African Americans long after 1920.

When we examine the library’s own past, we see similar shortcomings.

True, NPL was among only a handful of southern public libraries to serve African Americans early on—but that was on segregated, second-class terms.

Until 1948, African Americans went to the then-called Negro Public Library. It opened in February 1916, thanks to additional Carnegie money; $5,000 in city funds; and $1,000 members of the local African American community had raised.

When it closed in 1949, proceeds were set aside to build a new location for African Americans, and the Hadley Park branch opened in 1952.

No known documents show NPL enforced segregation because of actual library policy during the 1950s and 60s. In fact, in 1950, then-director Alvarez and the library board quietly desegregated the Main location. But it’s safe to believe that the prejudices of the Jim Crow era, which were backed by law and kept Nashville divided, also cut through this library.

The more true inclusivity NPL has since achieved now sets the stage for Votes for Women.

For example, NPL’s Civil Rights & A Civil Society initiative helped it win the 2017 Library of the Year award. With an archive of photographs, news accounts, and oral histories from the Civil Rights Movement in Nashville, staff guide students and community groups into conversations about complex human rights questions today. What began as a class for local police trainees reached 6,598 people from law enforcement and beyond last year alone.

In 2013, NPL launched Pathway for New Americans to offer free English as a Second Language and citizenship support to locals. At the time, the city was one of three to partner with the U.S. government in this way.

And as early as 1978—twelve years before the Americans With Disabilities Act—NPL began an accessible news service for Deaf and Hard of Hearing people. It’s now a statewide library, housed at NPL. Talking Library volunteers also read books, newspapers, and magazines so patrons with certified reading disabilities can listen by radio receiver, phone, or web stream.

Meanwhile, the Brooks Collection of oral history interviews with Middle Tennesseans who identify as gay, lesbian, bisexual, or transgender show what life was like for LGBTQ+ people before the turning point of the 1969 Stonewall riots in New York City.

At Votes for Women, talk and tech will further sharpen Nashville’s appreciation for contradiction, struggle, and the urgent need to keep moving forward.

“Beyond 2020” workshops will examine which modern-day practices and policies still keep some people walled off, from the vote and from other important forms of power. Meanwhile, a voting simulator will show individuals how they can influence group decisions—and how their abstentions can shut them out.

Where the Future Matters

Votes for Women opens in 2020, a hundred years since women won their way to the ballot box.

From this space, the library will ask: What’s next?

Amidst all that has changed and all that will change in our society, this will continue holding true:

Your ability to ask questions and express yourself bring value to our community. 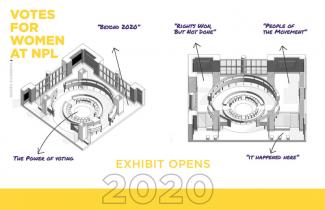 For more, pick up a winter 2019-20 Unbound at your library, or view the full article online here, via Issuu.

Andrea, Allison, Kayla, Ed, Matt, and Eddie work together to share all the awesome things NPL does with as many people as they can!