Why are libraries the tallest buildings in the world?

Because they have so many stories!

Bazinga! Sorry but I had to start with that. Now that you've had a laugh (come on, you know you did), let the celebrating begin! June 9th, 2021 marked the 20th anniversary of the grand opening of the Main Library Downtown, and this post is honoring that momentous occasion by taking a look back at the history of the downtown libraries.

First, allow me to mention that on top of this anniversary, there's something else notable to mention regarding the history of the library - the fact that Nashville's library system has been serving the citizens of Nashville (and beyond) for over 135 years now. That's a lot of checked-out books!

Before I dive into more details about how the current downtown library building came to be, here's a little bit of history about the start of the library system in Nashville, and the previous library buildings that called downtown home.

Check out part II of this series that includes staff memories of the Church Street library opening! 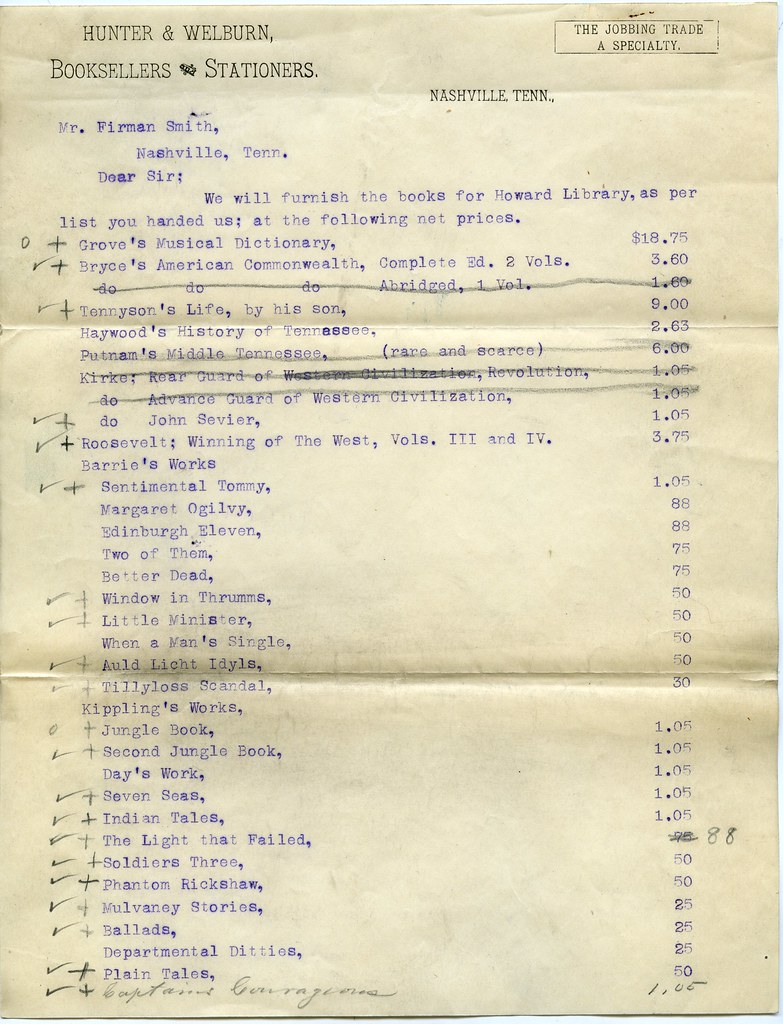 As I mentioned already, Nashville's library system has been around a long time - since 1885 to be exact. Maybe longer if you consider the fact that in 1813, the Tennessee General Assembly passed an amendment authorizing a lottery to raise $5,000 to purchase books for the Nashville Library Company. But let's fast forward about 70 years.

The Howard Library was established October, 1885 and named after the man M. H. Howard, who donated $5,000 (or $15,000 - not sure since both figures were documented) for the establishment of a public library.

Take a wild guess where that library was located - right where the Main Library Downtown sits today on Church Street (on the east side of the Library) in the Watkins Institute building. When Samuel Watkins provided the money to build the institute, he also asked that one of the rooms was furnished with bookshelves, and it was set apart for the use of a library.

For its first years, the library wasn't a free service as we know most libraries to be now. It was more of a reference library, with researchers primarily finding use of it. But this pay-to-use library system didn't last too long, and actually was a struggle for the library since they received little support from the outside.

One of the annual reports from 1898 talks about how the donation from M.H. Howard essentially ran out, and a crisis was reached in 1896. This is when the report goes into further detail about the process of converting the library into a city institution. This happened when a bill was prepared and passed in April, 1897 that required the following: 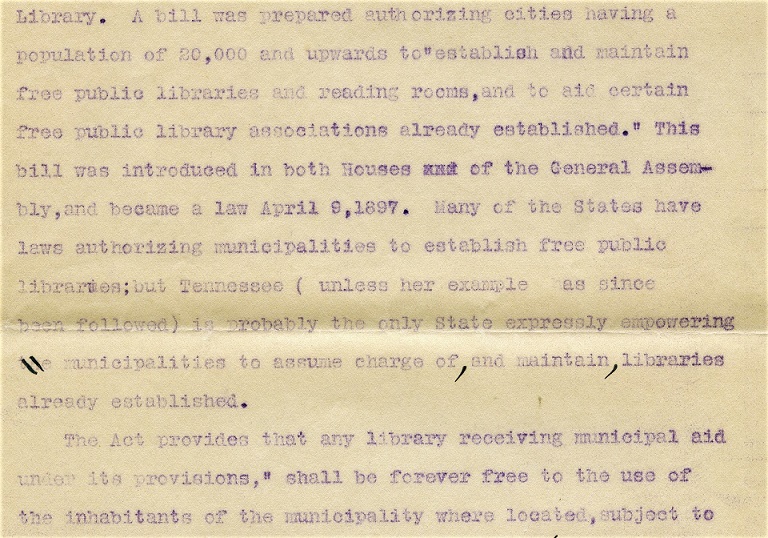 With the city/municipality taking over the library and funding coming through (before municipal aid kicked in, the money came from various people including the directors and "public-spirited citizens"), the library saw several improvements such as:

Since these improvements were made, the library stated that they'd seen a considerable increase in "daily attendance", mainly by pupils in the city schools.

Now we move on to the changes that occurred when Andrew Carnegie decided to put forth his philanthropic abilities.

Most people recognize the name Carnegie, especially in reference to libraries, and if you're familiar with the NPL system - you know that we still have 2 of the original Carnegie buildings as branch locations (East and North).

1901 was an important year for the library system. The reader's card fee of $2 (roughly $63 today) was abolished, making the Howard Library the first free circulating library in the city.

It was also an important year because it's when Andrew Carnegie pledged to donate $100,000 for a new library building in Nashville, IF the city would continue to maintain the building every year, at the cost of $10,000/year. Obviously that was agreed to.

The building was officially completed in 1904, at the corner of 8th and Union (on Polk Ave) where the Ben West building presently sits (more on that library later). Mary Hannah Johnson was the first Library Director, and served in that role until 1912. 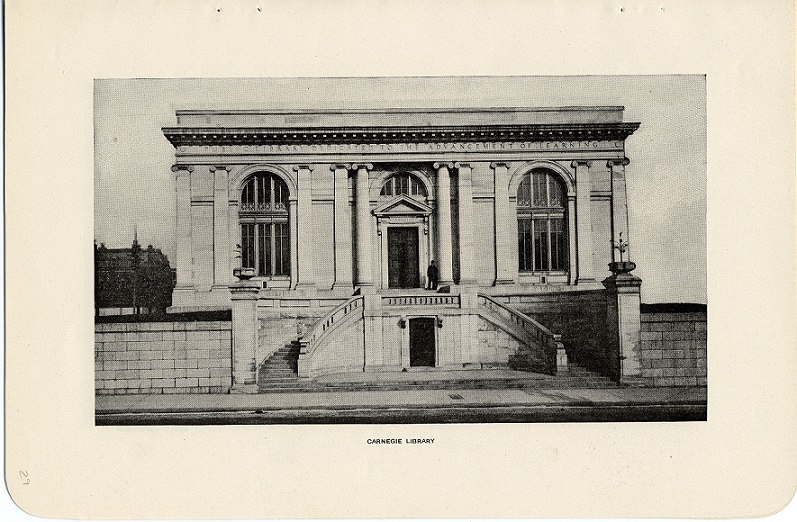 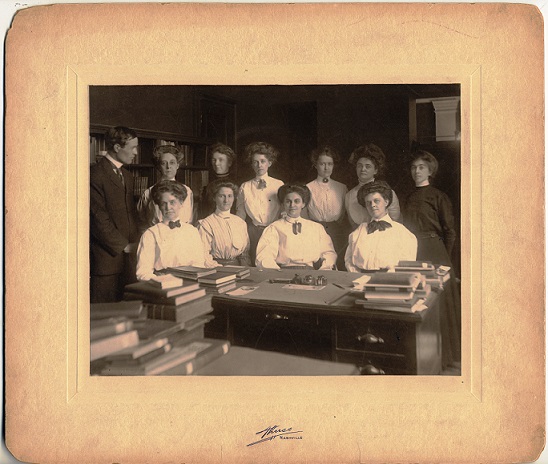 Some of the highlights of the library under Johnson's tenure:

"...by this method it has been seen that while the leisure classes avail themselves of the library privileges to a great extent, the majority of the readers are persons in active employment, many of them being engaged in the various trade industries. For instance, to the casual observer, it seems surprising that the largest percent of the borrowers added in 1908 are registered as laborers."

Carnegie wasn't finished with just one library in Nashville, between 1914 and 1920, he donated more money for 4 more branches to be opened: 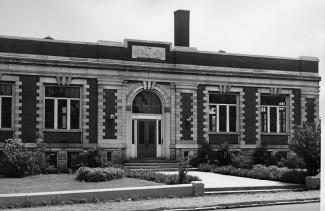 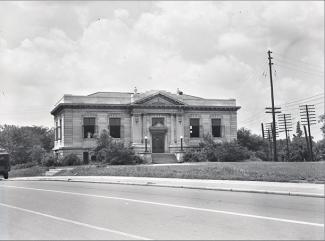 Johnson's last year as director was 1912, but she was followed by Margaret Kercheval until 1920, who was responsible for not only overseeing the construction and opening of the 4 above branches, but also organizing the efforts that the library provided during World War I with the ALA - "one million dollars for one million books for one million soldiers." 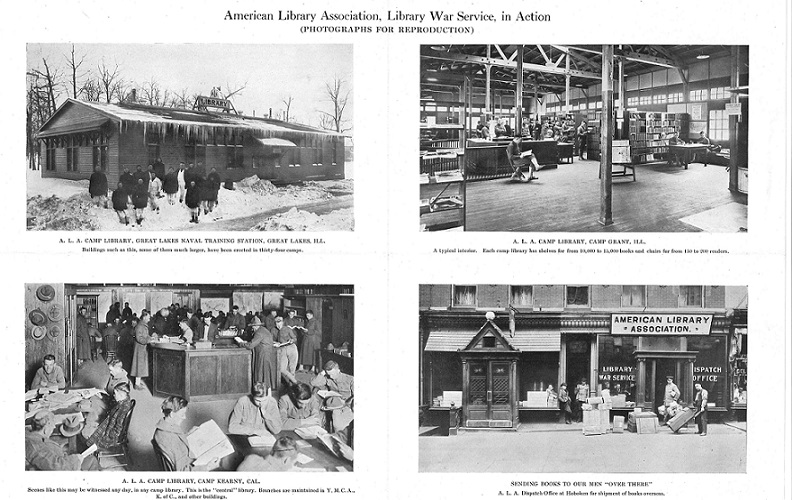 There's so much more to talk about in regards to the library history, but here are some other highlights before the next downtown building (Ben West) was built... 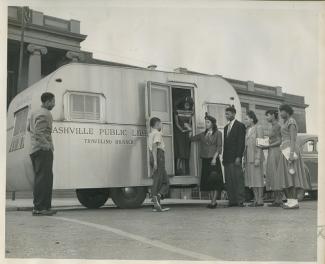 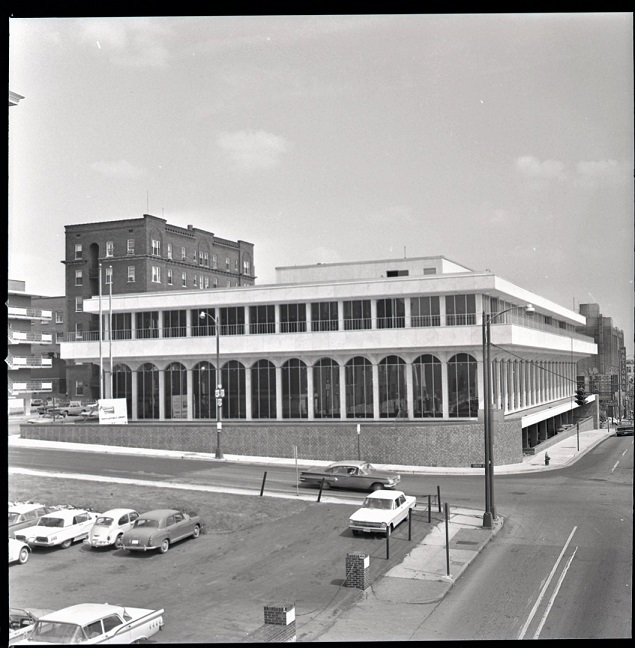 We pick up again after 1963, when the building of the new downtown library (after Carnegie) began.

At that time, it would appear the library and its patronage grew quite a bit since the downtown Carnegie Library was built, so it was deemed "much needed". The old building was apparently in a "dangerous condition" and needed extensive repairs.

The plan adopted by the Library Board was a $2.3 million dollar initiative to expand the library system, creating more branches through the city and to, of course, build a new downtown library. This, of course, was then the first main public library for Nashville and Davidson County built with local government appropriations.

One thing to point out with this new library expansion plan too is that this time frame of the early 1960's was around the same time that the city was annexing more land, and working on a plan to consolidate the city and county governments. So with more land and a higher population, naturally the growth of the library system went with it. 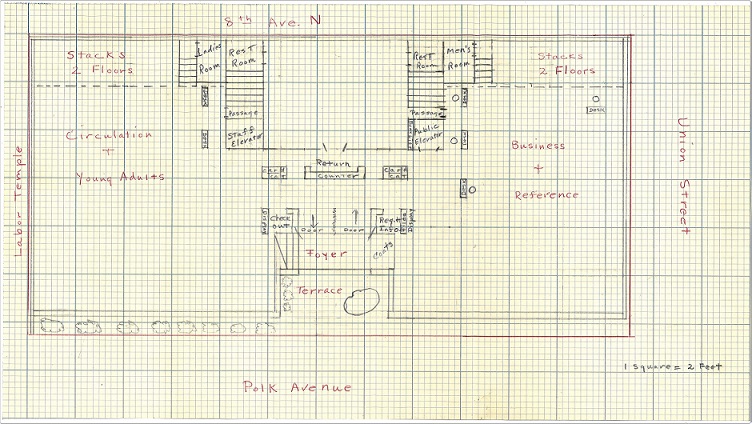 The architect of the building was Taylor and Crabtree, and as I mentioned before, the location of the new building was essentially where the Carnegie Library previously was located, plus added space from purchasing land around it (some by use of eminent domain).

One little detail I found in one of the planning documents that provided suggestions of how the building should be designed, it was stipulated that...

"The library should be arranged so that every part of the building is immediately visible from the main circulation desk. This is essential - Everything should be so arranged that, if need be, one person could run the library."

Interesting tidbit, I thought, and not sure if that remained true but this is from someone that looked over the plans and made several other suggestions and proposed drawings, such as one sentence that simply says "air conditioning." Smart thinking.

I believe 1961 was the year the planning officially began and 1966 is the year the library opened, later named for Mayor Ben West, after his death. The front doors opened on the Polk Ave side - somewhat of an homage to the old home of President Polk that used to sit on the very same spot. Also, it was more practical for patrons since most were coming from the bus stop, across from the War Memorial Building.

30 more years go by and the city continues to grow, and another new downtown library is needed. 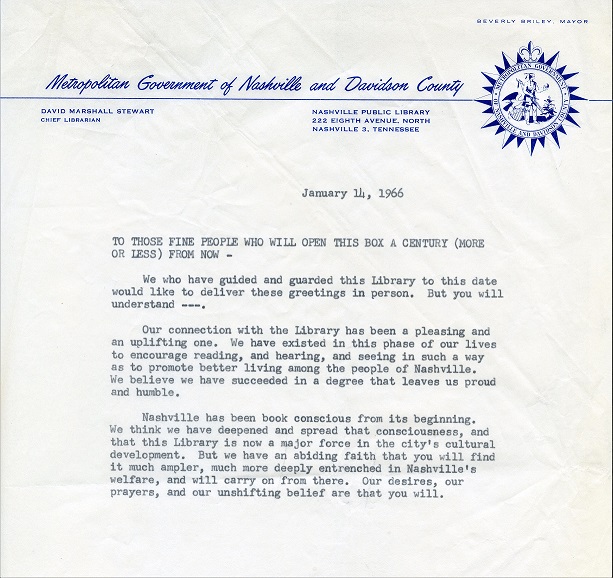 And now we come to the current building on Church St. It was built when the future of libraries was somewhat questionable due to the rapid change in technology with personal computers, the internet, access of information, and the resources offered by the libraries. Libraries were looking to make changes, and Nashville wasn't the only major city to do that in a physical way (both Denver and San Antonio also built new libraries around this same time).

But what Nashville created with this Church Street location was a building that is 4 times the size of the Ben West building (from 71,710 square feet to 300,000 square feet), and has a "distinct architectural look" to it. Not that the previous buildings didn't - that's just what the June 9th, 2001 Tennessean clipping says.

In the building program for the new library, created in July, 1998, here's what the "spirit of the design" was meant to be like (in short)...

"The building will be an active space, alive with intellectual inquiry and the movement of users and staff. It is therefore important that first-time users and infrequent users not be overwhelmed upon entering the building. Rather, the building's environment and ambiance -- especially the lobby and entrance -- should be designed to convey an inviting sense of warmth, orientation, and organization..."

I'm not basing this info on any hard data, but I'd say this building has been pretty popular since its creation. It's gone through many changes - both physically and operationally - but still stands strong as the home base of the Nashville Public Library system.

And if you're curious about specifics of the building, here are some further details...

See highlights of the opening ceremonies in the Tennessean clipping below, and footage from a news report about the construction of the Church Street building (from the Audiovisual Heritage Center). 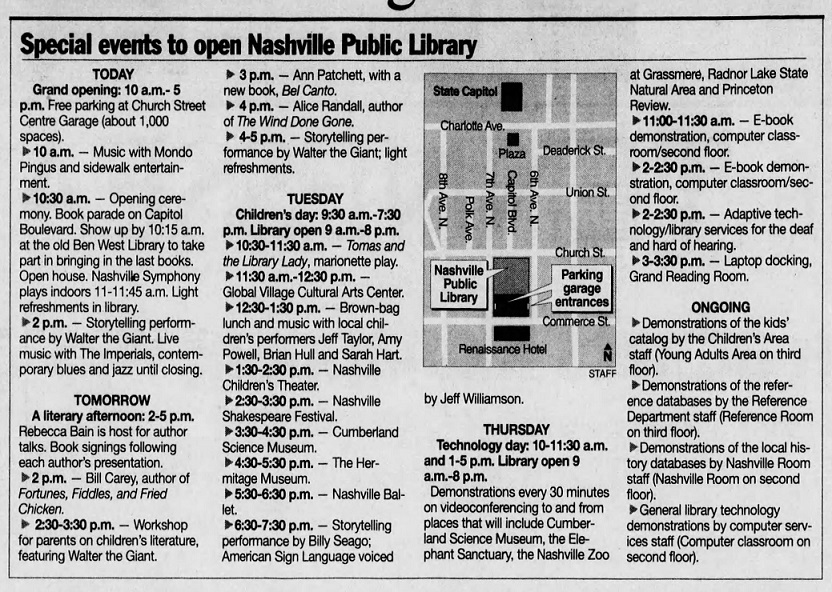 Staff Reflections on the 20th Anniversary

Of the 213 boxes in the NPL Collection in Metro Archives, you can imagine there are plenty more interesting details about the Library system over the last 100+ years. I wanted to share more but had to rein myself in. BUT there is some more information I'd like to share, and it's in part II of this series!

It will include great stories and memories from library staff that worked at the Ben West Library and moved over with the new building, or were hired on when the new building opened.

I hope you've enjoyed reading a little "literary history", 'til next time!