Did you know that Nashville has a history with the Olympics? It's not a big one mind you, but it exists. Today, we recognize the 1996 Olympics as the last Summer Olympics that any U.S. city hosted, and that was in Atlanta (Salt Lake City hosted the Winter Olympics in 2002). But what about Nashville? A lot of people might think we're too small and don't have the infrastructure, but that wasn't the concern many years ago when Nashville put together a pretty strong campaign to host the 1996 Olympics.

Can you imagine what Nashville would look like today if they had won their bid of hosting the 1996 Olympics? It already seems like it actually considering how rapidly fast Nashville is growing; you'd think we would have already hosted the Olympics and the Super Bowl in the same year. But if they had won, the infrastructure probably would look a lot like Atlanta (even though our traffic already does), and I have some evidence to prove it.

Among the Metro Archives' many, many documents and collections, there lives a box of papers from (and just after) Mayor Fulton's days in office. Along with a bid for the Olympics, Fulton was also involved in the city's attempt at securing a Pro Spring football team in the early 1990's. As well as a Pro Baseball affiliate, and Soccer, and etc. Well you see none of that happened, but obviously down the road, we eventually received an NFL franchise of our own, and a pro soccer team.

Fulton was active in Nashville's initiative to broaden its sports presence. Many of his plans may not have panned out, but they could possibly have inspired the sports market we currently have now. And if we had won the 1996 Olympics' bid, you really never know what might of happened. But here are a few of the details from Nashville's package for the '96 Olympics: 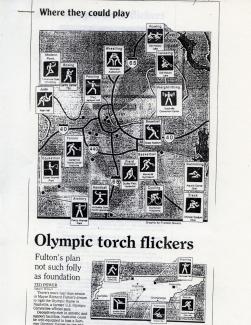 I guess we can leave it up to the imagination of why Nashville wasn't chosen to host the 1996 Olympics. But it would have been pretty awesome, I think. There's still hope for the future.

Here are a few of the other documents from the collection... 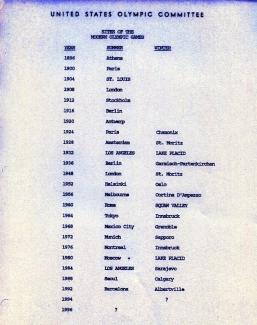 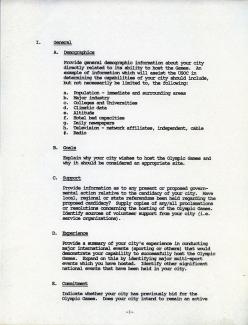 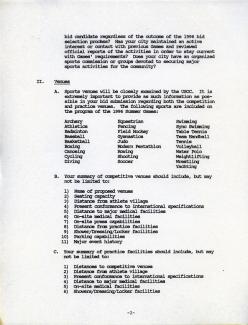