Something about old Bibles has always intrigued me. The "family pages" carefully chronicle the story of those who create the records the Archives carefully protects. Stories of beginnings, births, baptisms, and deaths comprising the framework of lives well lived. 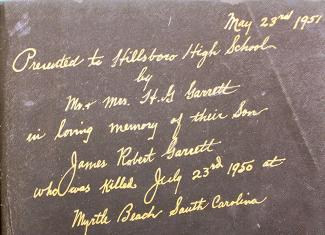 While processing some Education records, I found a large memorial Bible, King James Version. Standard fare for generations, finding it was not particularly surprising. Among those I have found over the years are the memorial bibles given for a student death. These are the most poignant as they speak to a tragedy that is seldom fully understood outside a family.

But this memorial Bible was different. The inscription specifically stated that "James Robert Garrett, Jr. was killed on July 23, 1950 at Myrtle Beach, South Carolina." "Killed" is an unusually strong word as most are "in memory of" or "dedicated to," as was a Bible in our school to a senior who drowned.

The word "killed" stayed with me. Why that word? I had a name, a date, and a location. I did some investigating. Ancestry.com revealed many "James Garrett" South Carolina death certificates for 1950. The Bible inscription lead me to the correct James R. Garrett and several others who died with the same date, same place, and same cause.

James R. Garrett was killed in Horry County, South Carolina, on July 23, 1950 in an airplane accident. The internet-based Bureau of Aircraft Accidents Archives (B3A) keeps a record of every air crash since 1918. Sure enough, there was an entry for the crash that killed James Garrett. A C-46 transport with 39 passengers and crew was departing the Myrtle Beach Air National Guard base for Nashville and crashed shortly after takeoff. There were no survivors. The site waymarking.com shows a bronze plaque on the War Memorial Plaza in downtown Nashville listing the Tennesseans killed that day. 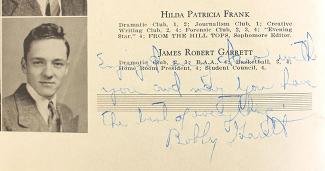 The Bible, given by Mr. and Mrs. H. G. Garrett, will reside in the Archives permanently. So too will the1947 Hillsboro High School Annual that records Senior "Bobby" Garrett gave his "Pepsodent smile" to Betty Mason.

Ken Fieth is the Metropolitan Archivist for Nashville and Davidson County. He is passionate about military history and brings it to life as a World War II reenactor. Learn more about the Metro Archives.