Conducting genealogy research is something I always say is not for the faint of heart; plan to be making a major commitment of your time and money.

If you're lucky, someone in your family has already done most of the research for you. But that's definitely not always the case, and the research can be that much more challenging depending on race, religion, location, or sometimes last name (for instance, if you have a common last name). But that's something we're always working on here at the Archives—making research easier for everyone.

One of those projects that Metro Archives has been working on for quite some time is the Nashville Slave and Free People of Color Database (NSFPCD). The Tennessean recently published an opinion piece about it, so I thought I'd provide further details of what the database includes, how it got started, and what's next to be added to it.

So let's begin with how the project got started... 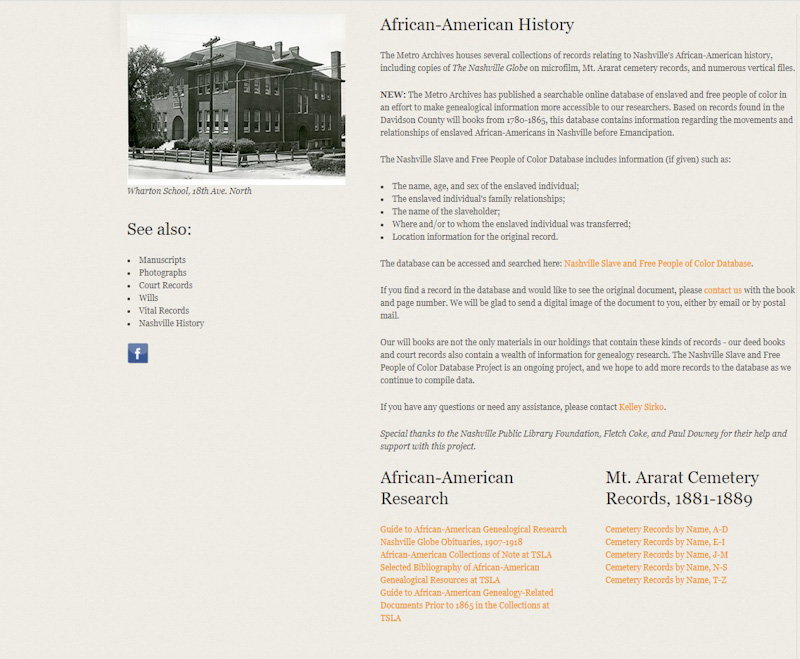 The idea and creation of the project started with our Archives' Librarian, Kelley Sirko.

In 2014, Kelley was assisting a patron conducting genealogy research. His family was of African American descent, and he had already conducted quite a lot of family research on his own. But he'd hit a brick wall when he tried to research before the year 1865, which is unfortunately common as the Tennessean's article describes the 1870 U.S. Census as the "impenetrable wall" for retracing African American family history.

Kelley said she doesn't think she was able to help the patron in this specific case, but also happened to notice that our books of probated wills and inventories contain a lot of information about Nashville's enslaved population, including names, ages, family relationships, and clues as to where they went after a slave owner died.

"That information was so valuable from a genealogical research standpoint, so I decided to use our will books and create a kind of database of enslaved people in Nashville."

So her next steps included creating an Excel spreadsheet to store the information. And starting with our oldest will book from 1780, she then went through page-by-page, documenting everyone that she found, along with all the information that was given about each individual. She continued with this same process for records from the early 19th century through the year 1865. 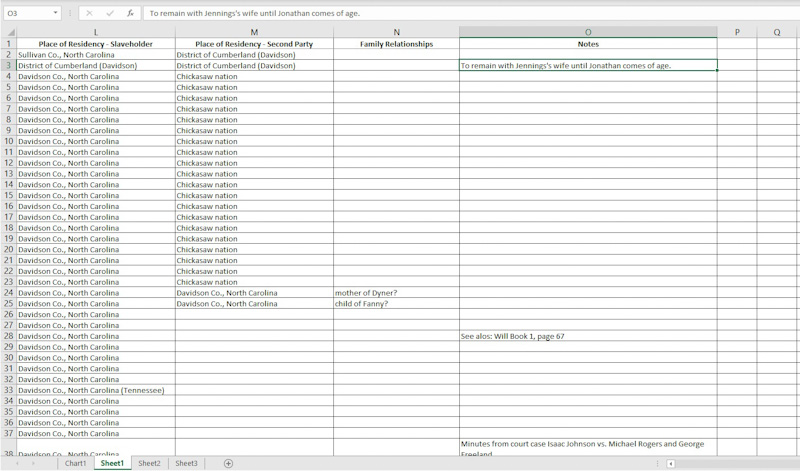 When asked about the overall goal of the project, Kelley said that the goal has always been to open up more avenues of research for pre-Civil War African American genealogy, and to make it easier for researchers to find ancestors.

"My hope is to be able to document Nashville's enslaved population in the rest of our records."

And the rest of those records include (with details about their specific contents):

Document below is a petition for emancipation for James Hendricks, from April 4th, 1854. 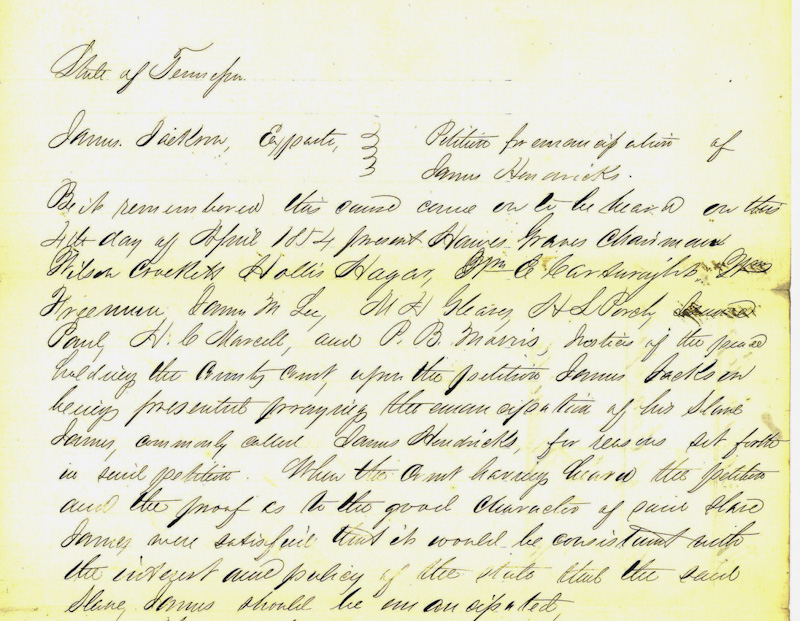 What the Database Includes AND How to Use It

For researchers coming in to do research, here are the other records we've read through and indexed (and plan to add to the database upon completion: court minute books (Chancery Court), deed books, and newspapers (which included ads for runaway slaves).

It is hard not to be emotionally affected by the grim and heart-breaking nature of each of these records. However, it is also important that they are documented—not only for family history, but also for the history of the city and state.

We've had several volunteers in the Archives assist us on this project, and currently have a part-time staffer continuing the project through the deed books.

The document below is from deed book F, pg. 219 - a deed of conveyance, including the sale of slaves, from Nehemiah Rozel to Peter Rozel. 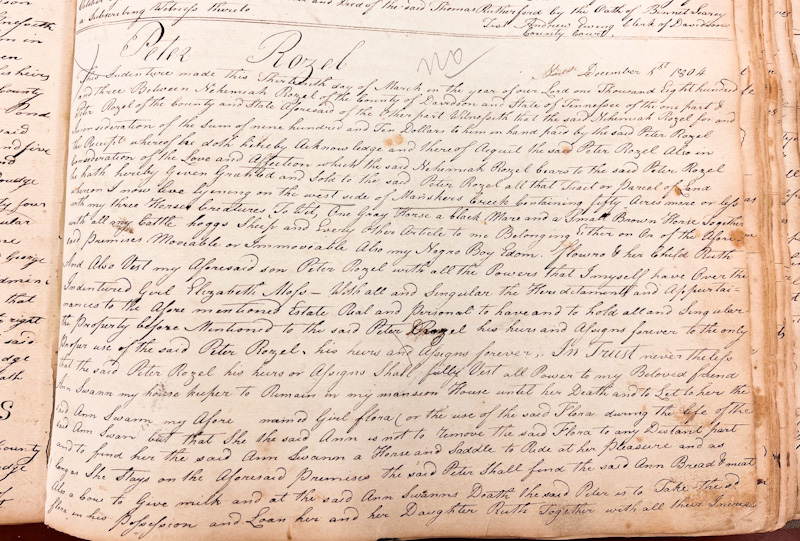 How to Use the Database

The database is now on what's called an "Open Data Portal" which is essentially an online, interactive Excel Spreadsheet. It can be a tad intimidating at first, but with a little help you'll soon be navigating the spreadsheet confidently.

We're using this same portal in other projects, such as the Davidson County Cemetery Survey, so once you've navigated one, you've cracked the code for all. Here's a link to the Library's page for the Cemetery survey, including some how-to videos of using the Open Data Portal.

But I'll highlight the basics in the following steps (important to note that these are basic steps from someone that knows about 50% about the Open Data Portal; feel free to continue manipulating the spreadsheet for your needs): 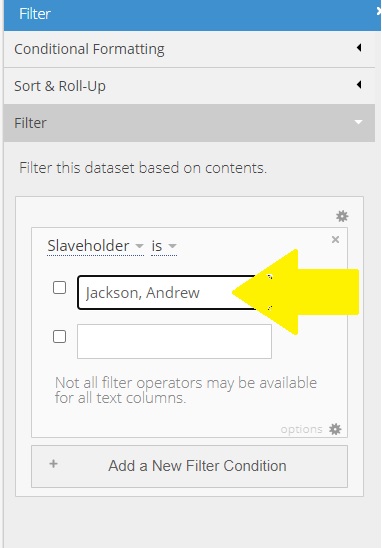 The database also allows you to export the data, or create a graph with "Visualization" if you need to. But if you're simply looking for information, simply scroll to the right to view all data involving each entry.

I hope this helped and wasn't too much info! If you have more questions though, feel free to come by Metro Archives, or call us at (615) 862-5880. Here's the link to our website as well, if you'd like to see what other records we have.