One of the most recent projects completed in Archives by staff member Morgan Simpson was transcribing the Nashville City Board of Health Minutes from 1900-1908. Due to that experience, we thought she'd have a unique perspective to provide. So the following is a guest post from her...

With all that we as a society have been facing in the wake of the novel coronavirus, it seems fitting to look back on similar situations in history. Upon reading and transcribing the Nashville City Board of Health Minute Book 1900-1908, I was able to peer into Nashville’s past and see how the city dealt with a smallpox outbreak over 100 years ago.

On February 14th, 1900, the Board of Health laid out a practical plan to inspect different territories in the city for cases of smallpox and outlined the steps on how to proceed if a case was found.

"…that the Board of Health employ two physicians to make a house to house inspection of such sections of the City…with a view of locating any additional existing cases of smallpox; to re-vaccinate those persons heretofore vaccinated but who did not take, and to vaccinate those who have thus far not been vaccinated…"

“The names and addresses of persons who have refused to be vaccinated are recorded and a copy forwarded to the Chief of Police, or some other officer for prosecution. The situation is discussed and summed up, showing what progress is being made in suppressing the disease, and work for the morrow is forecast…”

The inspectors and vaccinators would take down information on their respective territories, reporting on each member of a household. If anyone had been exposed to infection, they would become a “suspect” and would be moved to the suspect camp or quarantined in their home.

The Detention Camp is detailed out as the members of the Board tried to figure out the best way to hold suspects to prevent smallpox spread throughout the city.

If you were sent to the Detention Camp, the first thing that would happen is that you would be given a robe and slippers, so that your current clothes could be properly disinfected and eventually returned to you after your 14-day quarantine period. After bathing, you would be vaccinated and quarantined. A physician would inspect you once or twice a day to see if smallpox symptoms could be found, as well as symptoms for any other disease. If you were found to be showing signs that you were infected with smallpox, you would be isolated from the rest of the camp.

Guards worked 8 to 12 hour shifts on rotation both at the detention camps and at personal living quarters where people were quarantining. They also had to undergo inspection at random intervals since they were working closely with those who possibly had positive smallpox cases.

Apparently at one time, there was some sort of withholding of information from the newspapers regarding the number of smallpox cases in Nashville. This entry, also from February 14th, 1900, explains how the public should be told the correct number of positive cases found so that there was not speculation that would lead to false information. 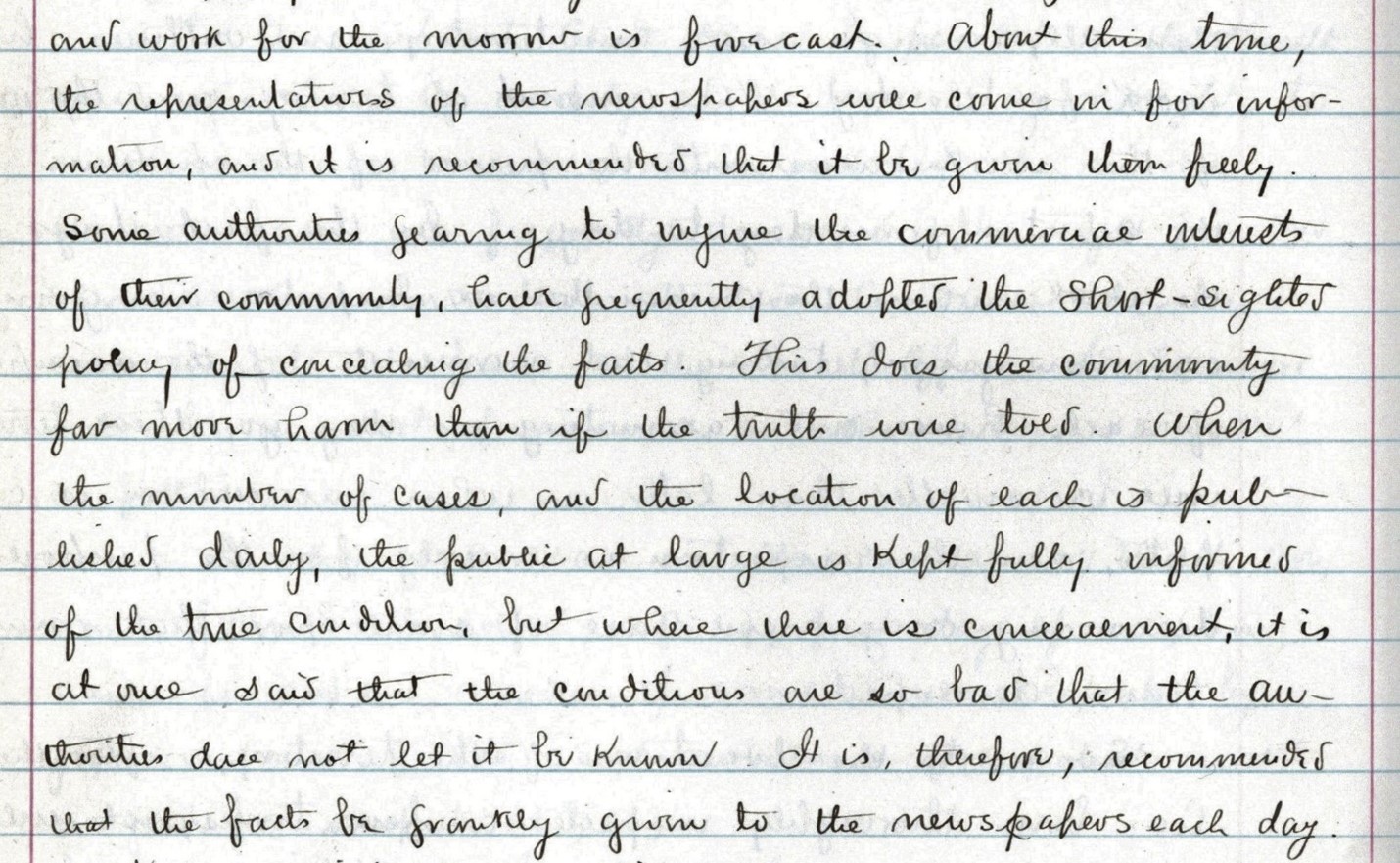 “…About this time the representatives of the newspapers will come in for information, and it is recommended that it be given them freely. Some authorities fearing to injure the commercial interests of their community, have frequently adopted the short-sighted policy of concealing the facts. This does the community far more harm than if the truth were told. When the number of cases, and the location of each is published daily, the public at large is kept fully informed of the true condition, but where there is concealment, it is at once said that the conditions are so bad that authorities does not let it be known. It is, therefore, recommended that the facts be frankly given to the newspapers each day.”

The Board talks at length about how to disinfect each home where smallpox was found. They mention that if the house is a “hut or shanty” it should be burned. Otherwise, they suggested using one or more of the following methods to disinfect the home:

1. Formaldehyde – All openings of the house such as windows, doors, and fireplaces would be closed using cotton or some other material, and then the house would be fumigated with formaldehyde.

“The formaldehyde is usually introduced through the keyhole of the door in amount equal to 4% of the volume of the air in the room, and the room left closed for not less than six hours. As formaldehyde requires the use of a generator, and it will probably be more convenient generally to use Sulphur.”

3. Bichloride of Mercury Solution – If the house was too open to be disinfected this way, the last resort was to use a bichloride solution. Once the rooms were fully doused with the solution, they would leave the windows and doors open to facilitate drying. This also had a 24-hour waiting period.

“The question of compulsory vaccination in factories, laundries, etc. was discussed by the members of the Board. Dr. Ewing stated that unless there was a considerable increase in the number of smallpox cases, he did not favor a general vaccination as the expense would be very great.”

“Dr. Buist moved that the Board inform the Mayor that in view of the increasing malignancy of smallpox that it is their opinion there should be a general revaccination which would cost the City between $3000 or $4000 and that the Board would like to know if they can expend that much.”

“…He [Health Officer] also called attention to the fact that at present there was not a single case of diphtheria, scarlet fever, or smallpox within the City.”

1907 – No major entries about smallpox. It is only mentioned in payroll. Typhoid fever really took precedence this year.

“Dr. Glenn brought up the matter of the smallpox situation, and the question of enforcing a general vaccination. Dr. McCampbell stated that 49 cases of smallpox had been reported during January.”

“Dr. Glenn moved that a general vaccination be enforced for the prevention of smallpox and that the Health Officer be instructed to employ suitable men, purchase the necessary vaccine points and proceed at once…”

As far as this minute book goes, there are no more entries regarding whether or not a general vaccination was established, or when smallpox was officially eradicated in Nashville. There is some resolution found in the Private Acts of 1909, where it is mandatory for children to be immunized against typhoid fever, diphtheria and smallpox before being able to attend any public, private or parochial school in Davidson County.

From Sarah: Well there you have it - I hope you enjoyed reading this post as much as I did adding it to the blog template! I always enjoy reading about Nashville's medical past, and this was an area I wasn't familiar with at all.

I'll add in a little more content here that I found when trying to find a good thumbnail image for the post. Old newspapers are filled with at-home remedies (among other things) for curing illnesses, diseases, and other maladies. This one came across that I had to share, cause according to it, it "prevents" smallpox. No other comment from me other than it seems like the opposite of Cryotherapy... 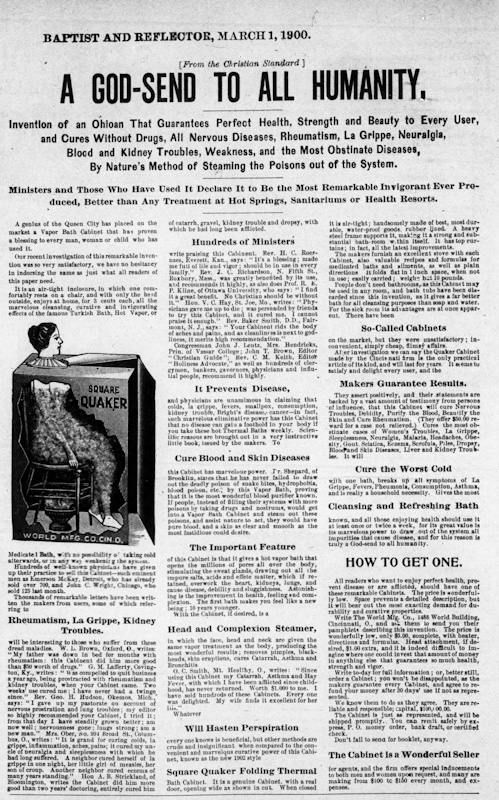 The speckled monster: a historical tale of battling smallpox