Bringing the HEAT with Archives Month!

The month of October is a notable month for a couple of reasons: 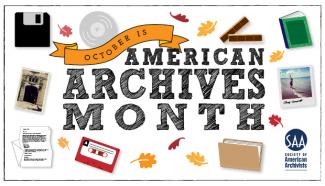 We're throwing both of them together for an educational blog post that's not only about notable fires in Nashville history, but also some behind-the-scenes info about the on-going processing and preservation of the Fire Department Collection. 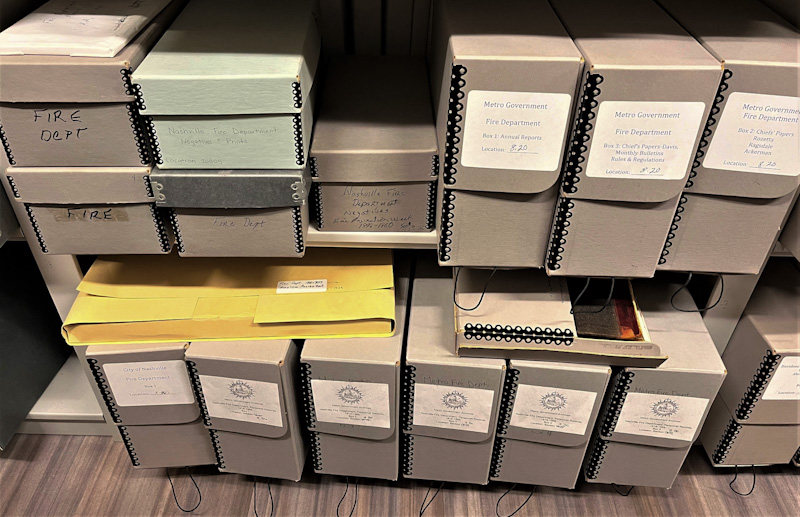 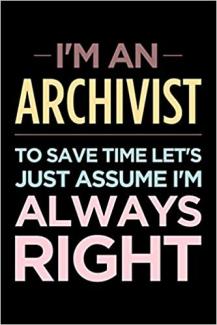 October is an archivist's favorite month because we get to brag and promote all the cool work we do; we do that all the time really, but now we have an excuse! During the month, we like to share info via social media and other outlets, about what it is we do, why we do it, how we do it, and any other fun details involved.

Last year, we focused more on our favorite items in the collection. If you're interested in those details, or simply in learning more about who we are and what we do, check out last year's blog post.

This year, since it's the 100th anniversary of Fire Prevention Week, we're also using that theme as it pertains to telling the story of the Fire Dept. records in our collections. Starting with when we acquired the department collection and what's been processed so far...

Today, the Fire Dept. Collection is pretty big! Sooo big, it cannot all fit here at our Library Home. But the bulk of it (probably about 80%) lives at our storage facility on Elm Hill Pike or EHP (our first home).

What's included in the collection, you ask?

Mostly reports, personnel records, log books, scrapbooks (a lot pertaining to Fire Prevention Week), some over-sized materials such as blueprints, and an endless amount of negatives.

How much is processed?

Ha - that's funny. So what we have housed here at the Library is all processed. What lives at EHP is currently in progress, and so far we've scanned about 6 boxes of negatives/slides out of at least 20 more to go. Also, we've scanned/indexed several of the scrapbooks in the collection.

What happens after an item is processed?

Currently, our processing system includes scanning the media (either photos, negatives, or slides), rehousing them into an archival-safe sleeve or container, indexing for meta-data purposes, and sending the materials back to EHP for safe keeping.

Same goes with the scrapbooks in the collection that are also being scanned/indexed presently; after that procedure - they're wrapped in archival-safe paper (like a present) and again, sent back to their EHP shelf to nestle safely upon their shelf. 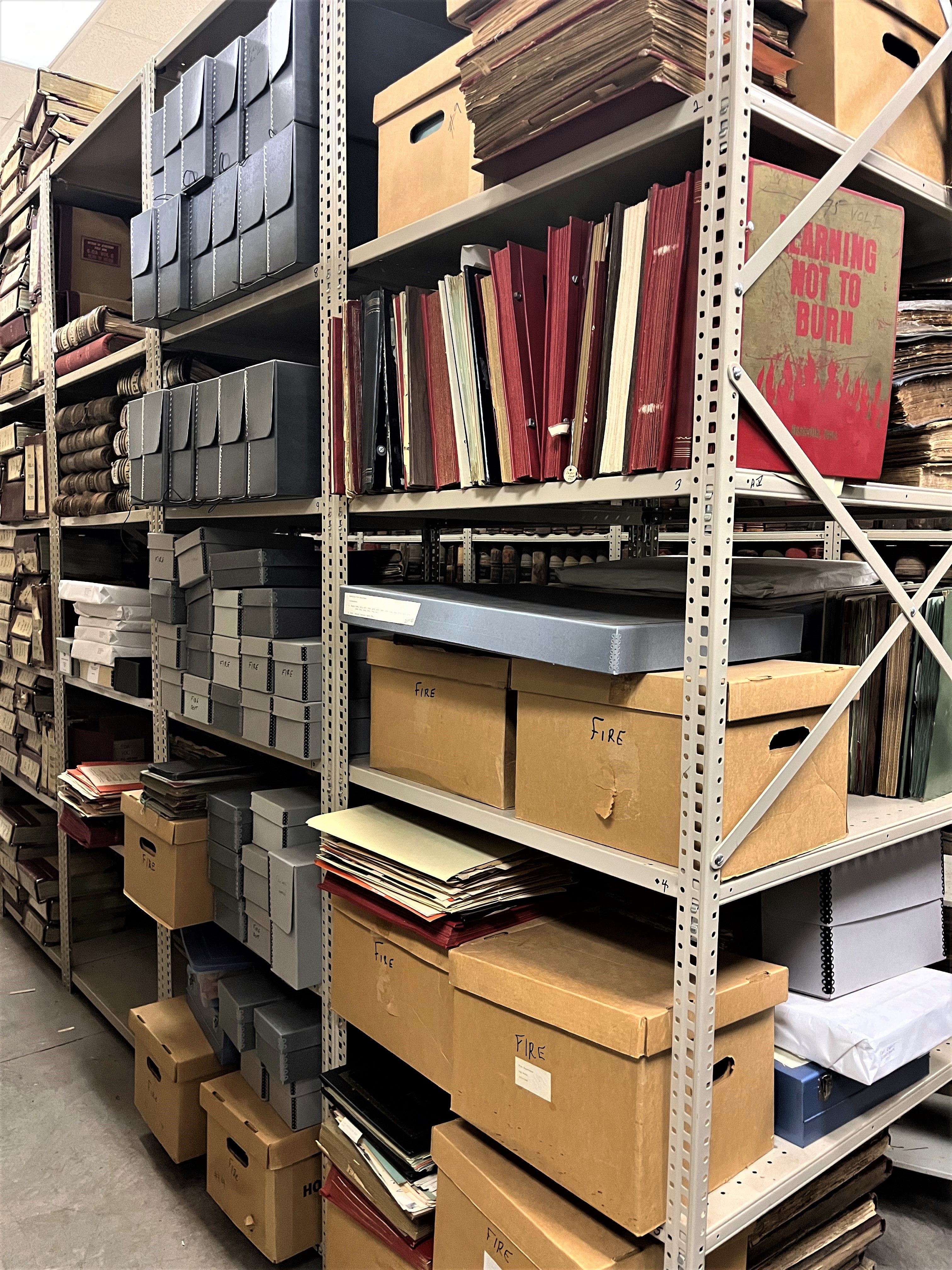 Do we have other collections pertaining to the Fire Dept. outside of the official collection?

What a great question, and the answer is yes! A few other collections we have that include materials pertaining to the Fire Department are:

Outside of these collections, there are a few other governmental materials or primary sources that include information about the Fire Dept. and their daily activities, such as... 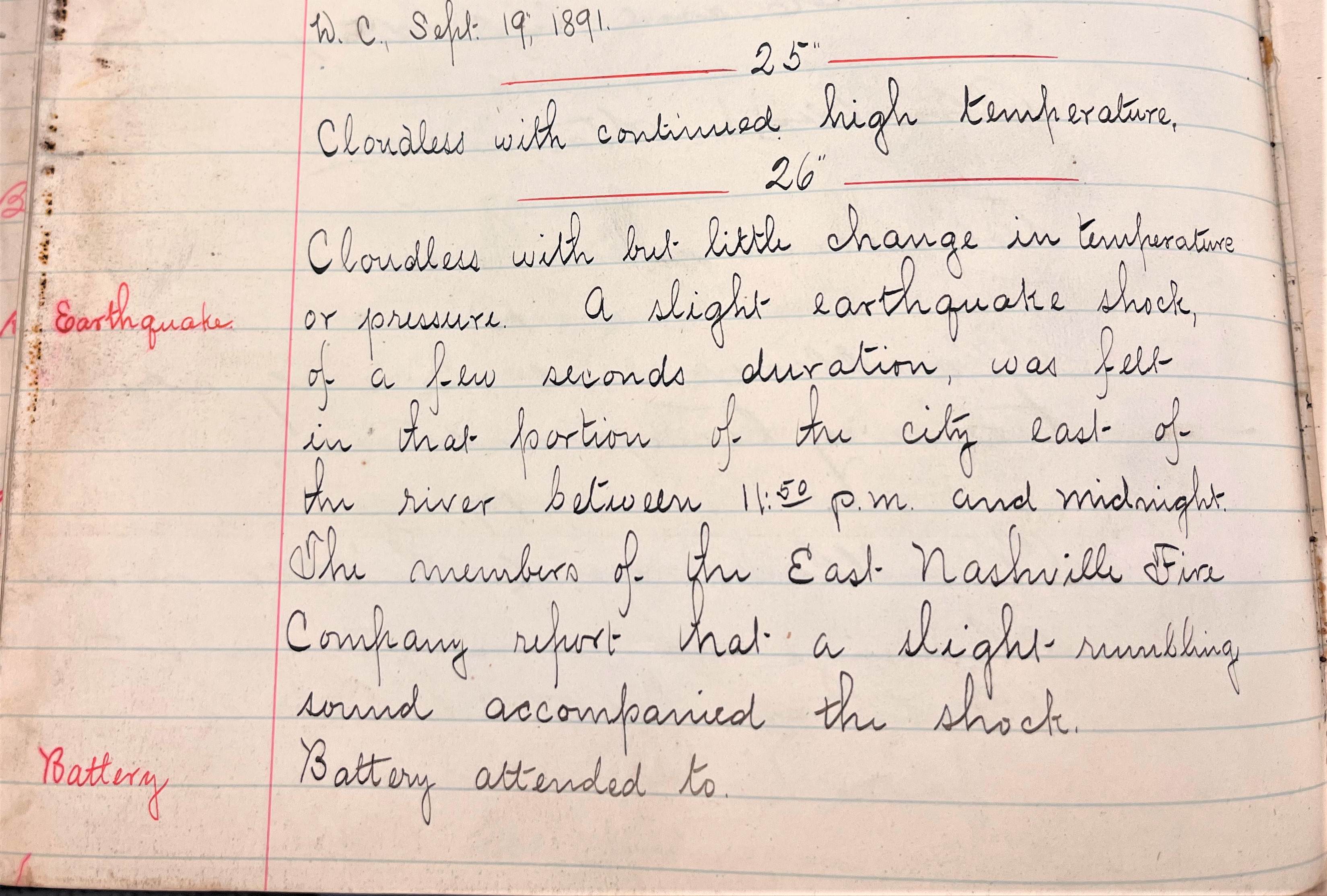 This year marks the 100th anniversary of Fire Prevention Week, which occurs annually during the week of October 9th in commemoration of the Great Chicago Fire. Several cities, including Nashville, participated in Fire Prevention Weeks prior to 1922, but it was that year specifically when the National Fire Protection Association (NFPA) began sponsoring the public observance in October.

If you'd like to learn more about the history of the event or any other details, check out the NFPA's website here, as I'm only briefly glossing over what we have in our collections pertaining to the Week.

Fire Prevention Week in our Records

They are greatly detailed though, with plenty of images of the various events of the Week, such as the "Miss Fire Prevention" contest (that Oprah won in 1971), Little Miss Spark, safety demonstrations and inspections, and a parade!

See a few scanned pages below... 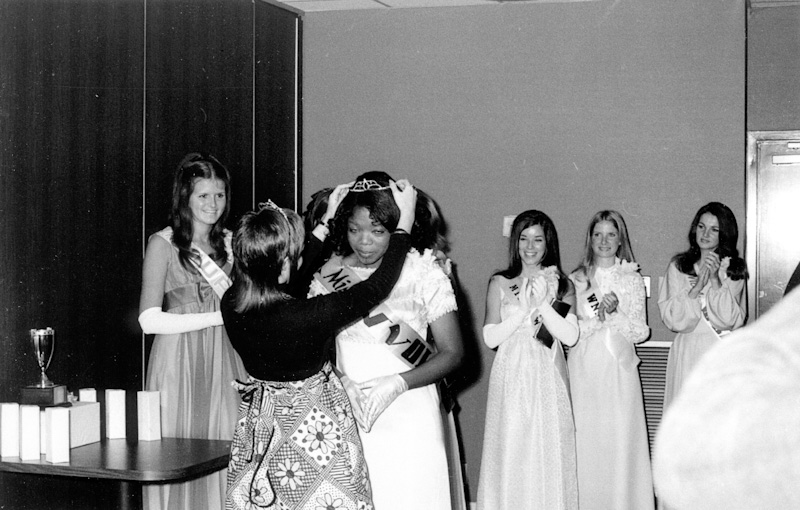 And from the 1972 scrapbook, a statement of inspection statistics for the year of 1973, from the Dept. of Codes Administration... 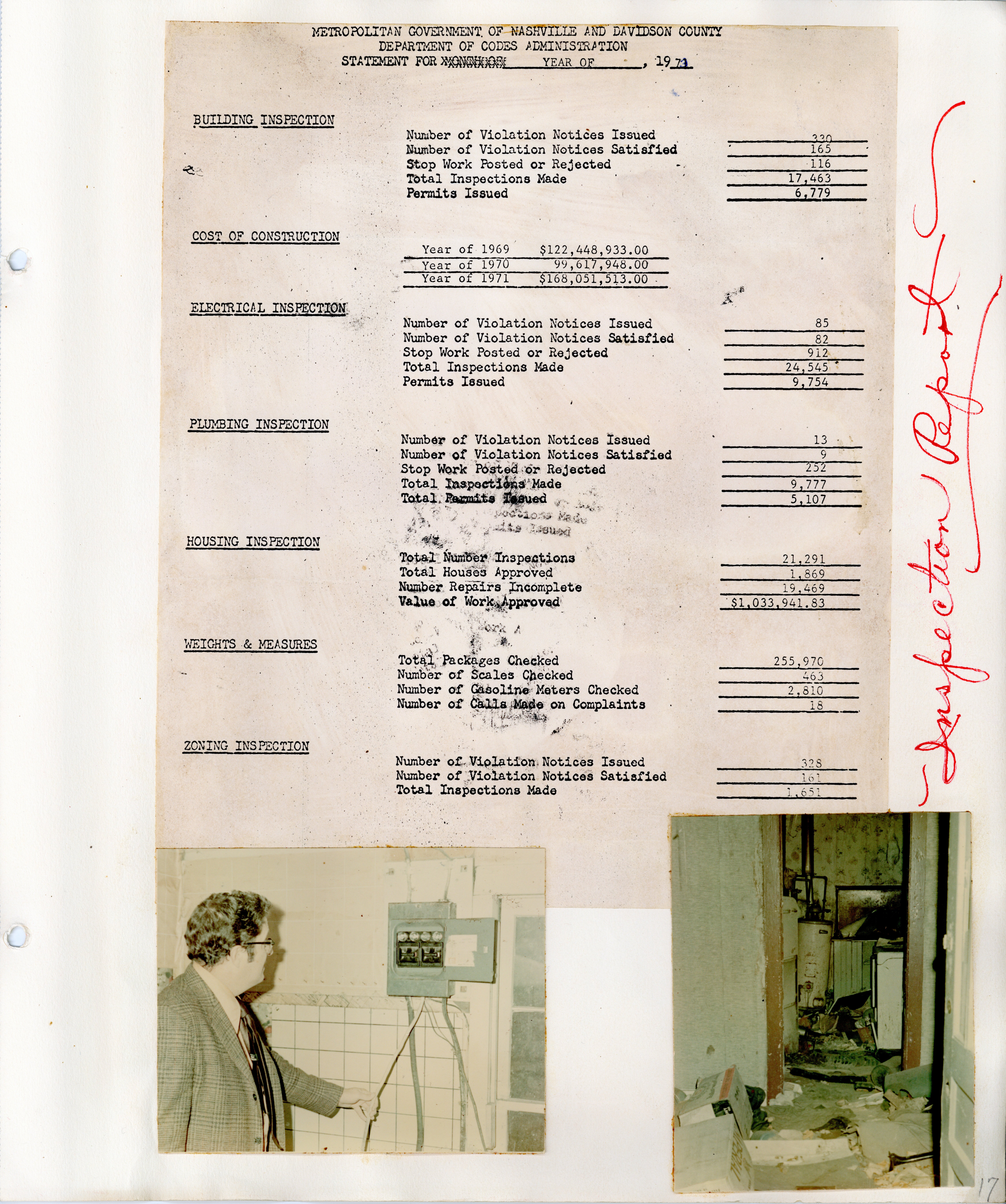 Last but not least, a brief recap of one of the worst fires in Nashville history, that occurred on January 2nd, 1892.

Back in the day, it seems just thinking the word "fire" sparked a fire, but that's why the Fire Dept. was established as a paid entity (in 1860), with more and more equipment added over time to help the firefighters safely and efficiently. 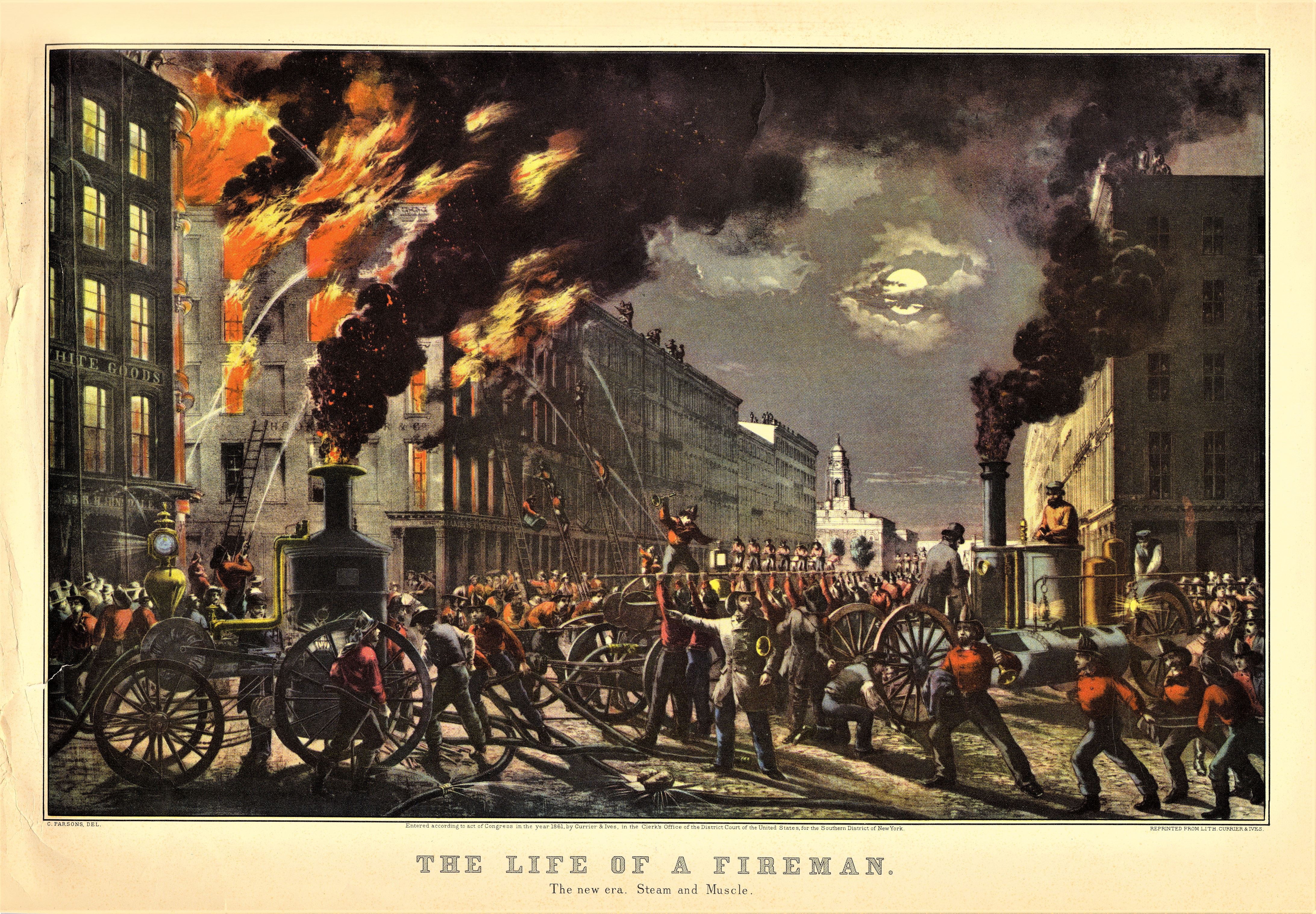 Though the 1892 fire is an important one to mention for a couple of reasons that you'll find out, I'm sure there were several other notable fires prior to the establishment of the Fire Dept. Like in 1872, the year that the Fire Chief declared in his report to the Mayor and City Council that...

"...I have to report it as one of the most disastrous of my Administration, and not only so here, but all over the United States, fires have appeared almost like an epidemic, sent to scourge the land..."

Also in 1881, there was another large fire that destroyed several downtown buildings, including ones on North Cherry Street.

But the street we know today as 3rd Ave N, between Church and Union, was facing a swiftly-moving extinction on the evening of January 2nd...

"The Fire God Was Supreme"

January 2nd started out like a typical winter day of the 19th century - light flurries in the morning time that ended around 1:00 p.m. A cloudless sky with a brisk, northwest wind picking up in the evening time though, that would be dangerous for the upcoming events that would begin on the 4th floor of the stoves, tin-ware, and house furnishings business of Webb, Stevenson & Co., at 213 N. College (3rd Ave N today).

The below map is an 1888 Sanborn Fire Insurance map, and the damaged buildings are outlined in red squares. 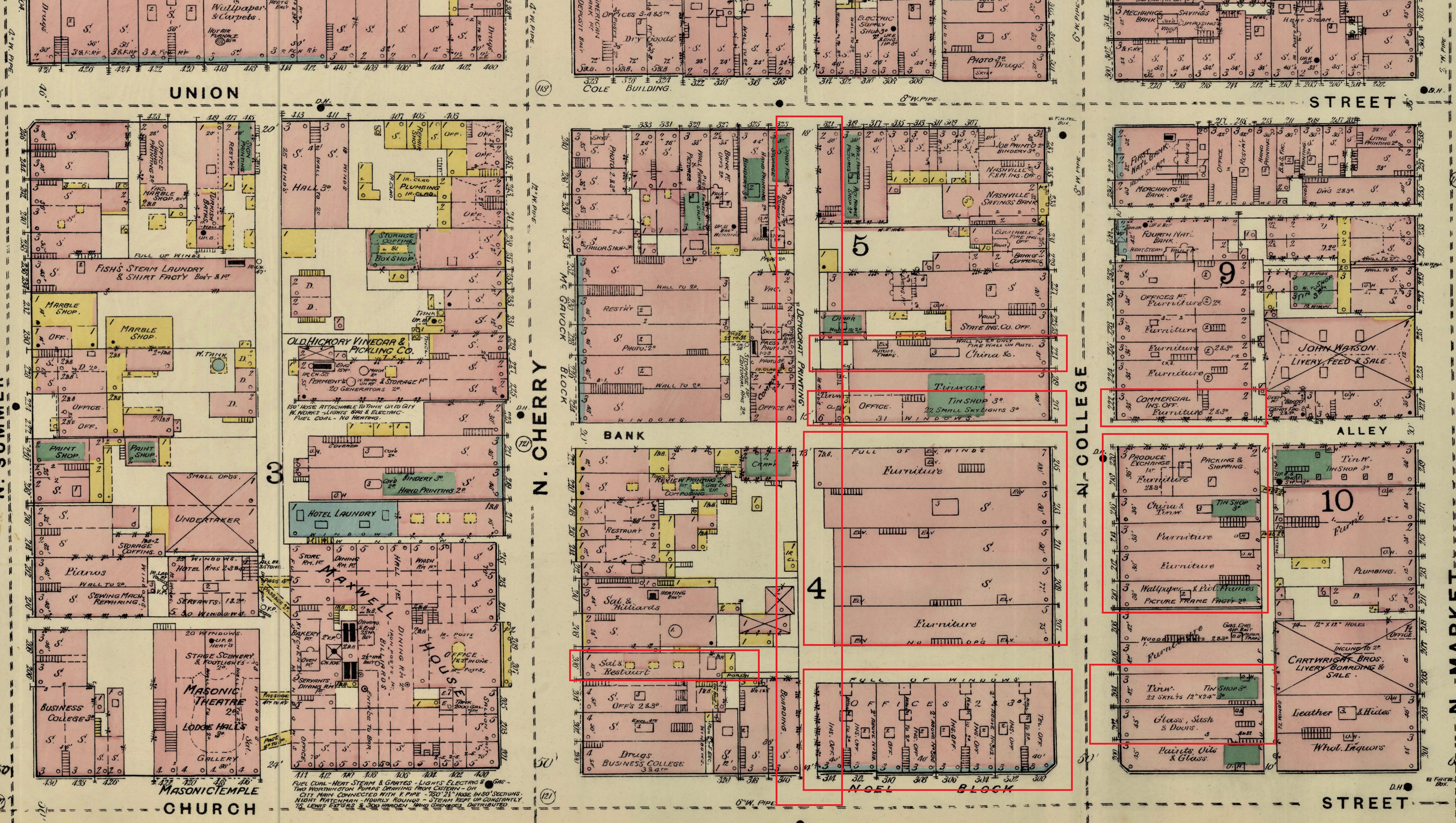 The cause of the fire unknown (even still today), but quickly drew a crowd as the firemen worked to put it out. I'm sure there were several fire halls at work, but one crew that was definitely battling the fire was from Engine Company 4, the city's first fire hall entirely staffed by Black men.

Within about 20 minutes of the fire starting (around 5:30 - 5:40 p.m.), the flames burst through the roof of the 213 building which caused a murmuring through the crowd of "the whole block is gone!" Which is what eventually occurred.

Despite two streams of water from the rear of the building and another crew going in at the front to try to stop it, "the fire god was supreme" with this particular fire, and the firefighters struggled to control it.

For the next few hours, the fire was winning the battle against the firemen; no matter what they did to try to take control, it raged on.

The crowd that continued to amass as the fire crawled building by building, was about the size of the population of the city - or so the news article guesses. And they could all hear the moment the safes crashed through the floors of the Webb and the A.G. Rhodes & Company (211 N. College) buildings.

At 6:26 p.m., the front wall of the Webb, Stevenson & Co. fell, spraying the pavement with bricks and mortar, and causing many on-lookers to run for cover.

When the hook and ladder company attempted a second time to raise their ladder and get a stream of water on the fire, the angle of the ladder and the way it was raised became too much for the base to hold. At the time, firefighter Jesse Brooks was at the top of the ladder and was rapidly carried to the ground when the truck turned over. Luckily for Brooks, he was not harmed when the ladder crashed through the awning at the front of the Bradford Nichol's store.

Fast forward some since the news article describing the event is rather lengthy in detail - after 7 p.m., the flames reached the Weakley & Warren Building at 215 N. College (which was 7 stories tall) and "...wrapped [it] in a garment of flame from the ground seemingly to heaven."

The tragic deaths of three firemen from Engine Company 4 came around 7:45 p.m., when there were six firemen on the roof of the Phillips & Buttorff building, at 217-219 N. College, spraying water into the windows of the Warren Building.

Despite shouts of warning to the men, the walls of the Warren building began to waver and crash quickly onto the roof of the Phillips & Buttorff building, sending three of the men from Engine Company 4 to their deaths: Captain C.C. Gowdy, Reel Driver Stanley (Stokeley) Allen, and Hoseman Harvey Ewing.

According to the Chief Engineer's report, the total amount of damage after all was said and done was $262,566.87 (roughly $8.2 million today). See the report below which details out every address that was included in the almost-all-night-long event.

The Noel Block that housed the Western Union Telegraph Company was destroyed during this fire. It was damaged/possibly destroyed in the 1881 fire as well. This info is noted in the Nashville Weather Reports that are below. 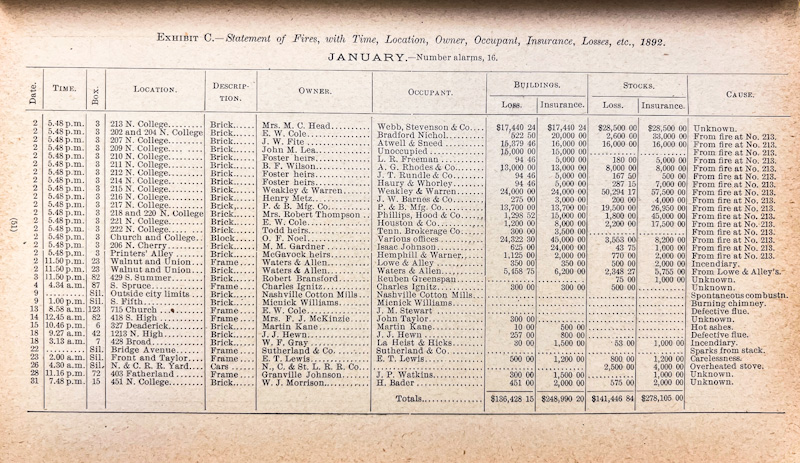 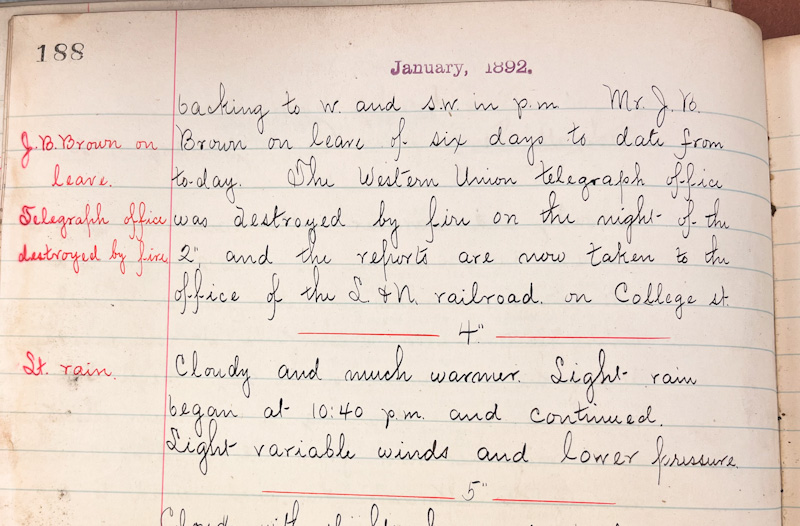 It wasn't until 10:30 at night when the firefighters were able to get somewhat of a control on the conflagration. Like I already mentioned, what wasn't helping was the strong wind, sending sparks of flames throughout the block of buildings; because of this, it's a wonder more buildings weren't lost.

If you're not already familiar with the 1916 East Nashville fire that destroyed several homes and caused some of the worst fire damage this city has ever seen - that's another I'd suggest you read about next!