Published on March 13, Junot Díaz´s long awaited first book for children is a love letter to the children-both young and old- who carry in themselves the memories of the places that have shaped them and their communities. 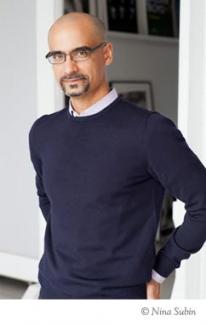 The product of a long-ago promise made to his goddaughters, Islandborn is Junot Díaz´s first ever book for young children. The Pulitzer Prize winning author of The Brief Wondrous Life of Oscar Wao drew upon his own background as an immigrant from the Dominican Republic to present the story of Lola and by extension, the story of a larger diasporic community.

As the book opens, Lola is given with a school assignment: she has to a draw a picture of her "first country," the one she lived in before she came to the United States. While her classmates all readily remember where they came from, she left the Island when she was just a baby. She doesn´t remember a thing! With the encouragement of her teacher, Lola asks the people in her neighborhood about what they remember. Bats with wings as big as blankets, more music than air, and mangoes that make you cry: one by one, Lola gathers details for her drawing.

But why did they leave, then, if the Island was so wonderful? One of Lola´s neighbors speaks of a "monster" that terrorized the island for over 30 years. An allusion to dictator Rafael Trujillo, Díaz´s book does not shy away from the political realities that drive immigration. According to Díaz, children are able to hold and understand "complex, painful truths," such as, for example, the realities behind their own immigration stories.

Like Lola, I myself came from an island (Puerto Rico). I was seven years old when I came to the continental United States, however; unlike Lola, I remember quite a bit: the mangoes that grew on the tree in the backyard of our second story apartment in Coamo, the song of the coquis filling the night, and the large cactus that grew in the front yard of our house on the corner in Arecibo. Like Lola discovers as she talks to her family and neighbors, memory is my connection to the island that birthed me. 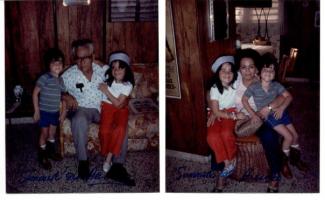 The author with her brother and grandparents in Arecibo, Puerto Rico, 1984

As a child, I was not unaware of the relationship between Puerto Rico and the United States. At the time, I understood it to be akin to that of a helpful older sibling. I did not see a monster. It was only after coming to the U.S., and seeing that the Puerto Rican flag was nowhere to be found (whereas on the island both flags were often flown together) that I began to realize (and through later study, learn) the "complex, painful" truth of the colonial relationship between mi isla and the United States.

I wish I had had a book like Islandborn as a child. I am glad I have it now, however. I inted to share this book with not only families that have histories like mine and Lola´s, but also with those that have no idea of the worlds that children of immigrant background carry within them. I suggest that you share this book with others as well. Listen to the stories Lola´s community shares, and take in Leo Espinosa´s colorful and vibrant illustrations; different skin colors, hair textures, and movement fill the pages. Representation matters. The stories of kids like Lola, Junot, and me matter.