Born in rural Kenya and educated in the United States, Wangari Maathai was the first woman in East Africa to earn a doctoral degree, a Nobel Peace Prize Laureate, and is the founder of the Green Belt Movement. Her incredible story is the subject of several picture book biographies for children.

While flipping through the channels on my television one evening, I stumbled upon a documentary that introduced me to an extraordinary woman named Wangari Maathai. Maathai was born in rural Kenya and was educated in the United States. She eventually earned a doctoral degree, becoming the first woman in East Africa to do so.  In 1977, Maathai founded the Green Belt Movement in response to the worsening environmental conditions she saw in rural Kenya. Because so many trees had been cut down by lumber companies, streams were drying up, it was harder to grow crops, and women had to walk farther and farther to gather firewood for cooking.  In 2004, she was awarded the Nobel Peace Prize (another first for an African woman) for her work supporting “sustainable development, democracy and peace.”  Maathai died in September 2011 at the age of 71, leaving behind a tremendous legacy, and work that continues today. She is one of my personal heroes. I encourage you to introduce your children to this global role model using some the books written especially for them. 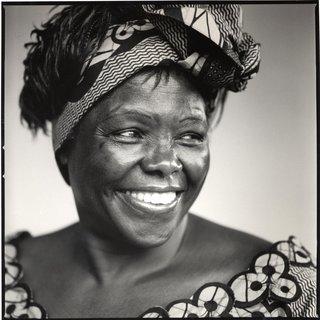 Maathai began her work by planting trees and encouraging other women to do the same. Her love of trees and care for the environment had its roots in her childhood, when “the earth was clothed in its dress of green.” What a shock, then, when Maathai returned to Kenya after her studies to find nearly no trees at all! Planting the Trees of Kenya: The Story of Wangari Maathai, highlights the impact of her work on the people of Kenya, “person by person.” Children will enjoy searching the illustrations for their many fine details. Can you see Maathai standing on a hill, seeing how so many of the Kenyan people were planting trees?

Planting the Trees of Kenya: The Story of Wangari Maathai

By Claire A. Nivola

Not everyone approved of what Maathai was doing, however.  Government officials in particular wanted to keep her from planting trees or speaking out against injustice. The backlash she experienced because of her work is sensitively portrayed in Wangari’s Trees of Peace: A True Story from Africa. In 1989, Maathai protested the government’s proposal to build a large office complex in a Nairobi park. She was both beaten and jailed for her efforts. Yet “right is right, even if you’re alone.” Maathai’s movement “spreads over all of Africa, like ripples in Lake Victoria.” The text is very approachable for younger children.  No one can stop trees from growing, or a movement from spreading!

Wangari's Trees of Peace: A True Story from Africa

Because of her work planting trees, Maathai was known as Mama Miti, or “the mother of trees.” Mama Miti: Wangari Maathai and the Trees of Kenya focuses on the traditional wisdom Maathai shared with the women of Kenya about native trees and their many uses. Each time she tells a woman to plan a tree, the phrase Thayu nyumba is repeated. It means “Peace, my people,’ in Kikiyu, Maathai’s native African language. For her, caring for nature meant to live in peace with it.  The illustrations combine realistic oil paintings and cloth prints to reflect the aesthetic of Kenya. Mama Miti: Wangari Maathai and the Trees of Kenya

These books are great places to begin exposing your children to the importance of caring for the earth, and to teach them that yes, one person can make a difference. You can also read books written by Wangari Maathai herself, several of which are available in our collection. Seeds of Change: Planting a Path to Peace Wangari Maathai: The Woman Who Planted Millions of Trees

The Challenge for Africa

The Green Belt Movement: Sharing the Approach and the Experience